Breach & Clear is a turn-based squad combat game. It is basically Frozen Synapse, except with detailed graphics and soldiers that are modeled after real counter-terrorism squads. This is not inherently a bad thing, but it should be noted that this game does a few things differently:

Firstly, you have less control over your soldiers than you do in Synapse. Sometimes your soldiers will feel like doing things that you didn't tell them to do. This can sometimes be good, other times bad. For example, I sighed relief when one of my soldiers was smart enough to turn around and shoot at an enemy that had flanked him, but other times I wished that he would keep his original target and let his buddies take care of the bad guys creeping up on him. 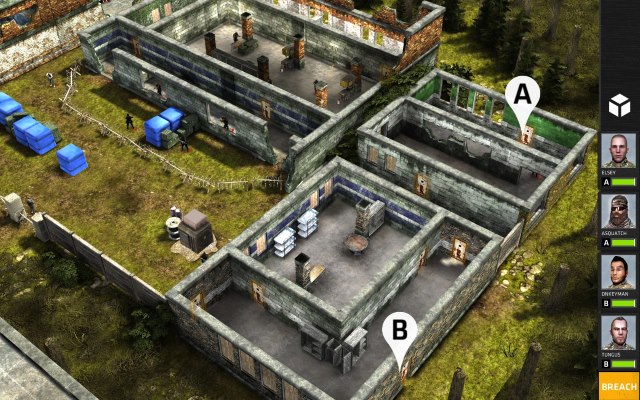 Secondly, there is no way to order your soldiers to wait. This can be a problem if you want to synchronize time-sensitive maneuvers (for example, rushing into a room after your teammate's flashbang has blown). You can order your soldier to walk in a little circle to burn time, but that's not always viable when you're pinned down by enemies. This means that the tactical aspect is somewhat watered-down compared to Synapse.

Thirdly, this game has character progression. Soldiers accumulate experience, gear, and level-up. This process is fairly enjoyable, and there is also an extensive character customization system that allows you to pick your soldiers' clothes, hats, weapons, accessories, etc (there are no female characters are available though, which is somewhat disappointing). Synapse had none of this. 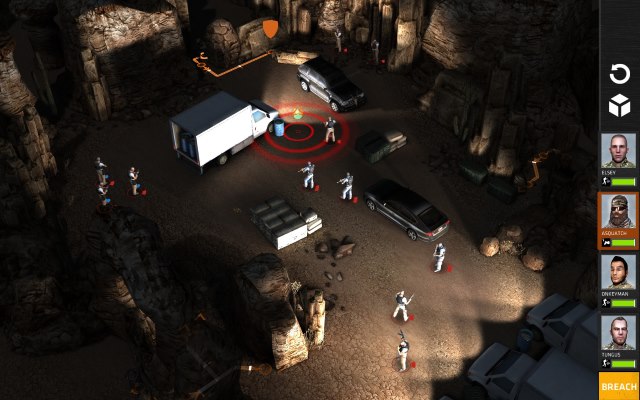 Fourthly, there is no "preview" feature. This is unfortunate, because planning attacks before finalizing your turn was an extremely useful feature in Synapse. In Breach & Clear, you just kinda have to visualize everything beforehand and roll the dice. Sometimes this is fine, as this game is far more forgiving than Synapse is - You won't die in one hit if you make a mistake, as all your soldiers have health and evasion stats that help them survive longer.

Lastly, there is no multiplayer. At all. Which sucks. This game seems perfect for playing with your friends, but instead you only have the option of playing against the lackluster AI. 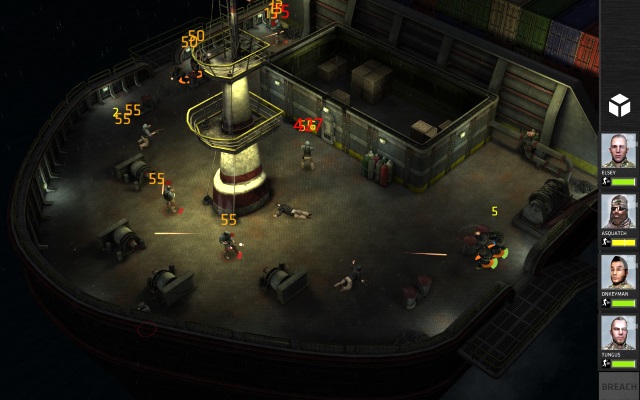 So, I'm kinda torn on Breach & Clear. It does some things right, but it is also lacking in other ways. Frozen Synapse is a superior game overall, but it isn't going to give military genre fans their fix of atmosphere the way that this game will. In this respect, that's where this game gets it right - It manages to deliver a solid tactical experience against a backdrop of beautifully rendered (and diverse) hand-crafted maps.

I had to ask myself whether I had fun playing Breach & Clear - And the answer is definitely "yes". It managed to genuinely entertain me, at least for a couple of days. And hey, that's what video games are for, right?

I'm just glad that didn't pay full price. I'd recommend you wait for a sale and do the same.
3/5

If you enjoyed this Breach & Clear review, you're encouraged to discuss it with the author and with other members of the site's community. If you don't already have an HonestGamers account, you can sign up for one in a snap. Thank you for reading!

© 1998-2020 HonestGamers
None of the material contained within this site may be reproduced in any conceivable fashion without permission from the author(s) of said material. This site is not sponsored or endorsed by Nintendo, Sega, Sony, Microsoft, or any other such party. Breach & Clear is a registered trademark of its copyright holder. This site makes no claim to Breach & Clear, its characters, screenshots, artwork, music, or any intellectual property contained within. Opinions expressed on this site do not necessarily represent the opinion of site staff or sponsors. Staff and freelance reviews are typically written based on time spent with a retail review copy or review key for the game that is provided by its publisher.