Xmas Shooting  Scramble!! answers a question thats burned throughout the ages; what if, instead of Santa being some tubby guy with a beard, he was an adorable anime girl? One named Aru, who has bunny ears. The answer is Bullet Hell. Because Japan.

Turns out, all the toys have been stolen, so Aru flies off  of course, adorable anime Santa can fly  to reclaim them. Because she can fly on her own power, she has no use for the magical reindeer of lore, so they are reemployed as shooter buddy satellites, and spit out jolly green waves of plasma and death. Then they mow down waves of snow bunnies, Christmas trees and icicle-flinging snowmen who fill the screen with lazily drifting projectiles that are secretly a good thing. Because if you manage to kill whoever fired them at you, they all turn into delicious points, boosting your score and feeding your hyper mode. 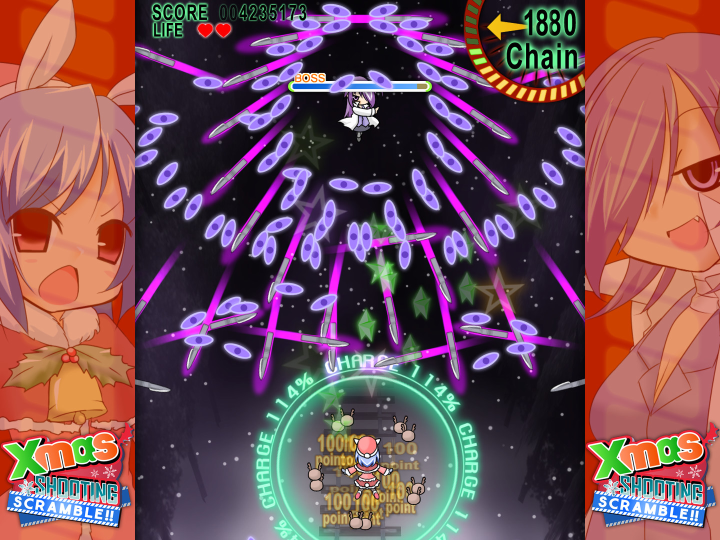 Behind all the festive insanity, Xmas Shooting  Scramble!! makes no bones about the fact that its a real shooter, and that its out to get you. Built on the same engine as previous Orange Juice doujin standout QP Shooting  Dangerous!!, it shares much of what made that game so memorable. They share a goofy cartoonish veneer that hides a hateful, sadistic heart which goes to great lengths to kill you. Its a shorter game, capped at only three levels, but it still stacks the odds firmly against you by giving you a single credit to work with, and nothing else. Youll beat the game in one go, or you wont beat it at all.

Theres some help for returning players who can import their Rbit formations from QP, which are quickly adopted by Arus reindeer herd. Formations are the order Arus satellite helpers fall into, letting you bookmark three that you can cycle through in-game. You start with only the most basic trio until you unlock more through either playing through the game or smugly bringing over your QP data like me. The formations are kind of brilliant, changing the way you play Scramble completely, and paying quiet homage to multiple shooters of old. Theres an inverted scrolling satellite like in BioHazard Battle, or fixed-placed formations that might put you in mind of R-Type or Thunder Force. But thats not to say they dont come up with patterns of their own, like the Sword formation that has zero projectiles but asks you to mash a column into a targets face. Or the Niagara attack, which pushes all your satellites high on the screen, and has them drizzle an almost serene cascade of bullets back down at you. 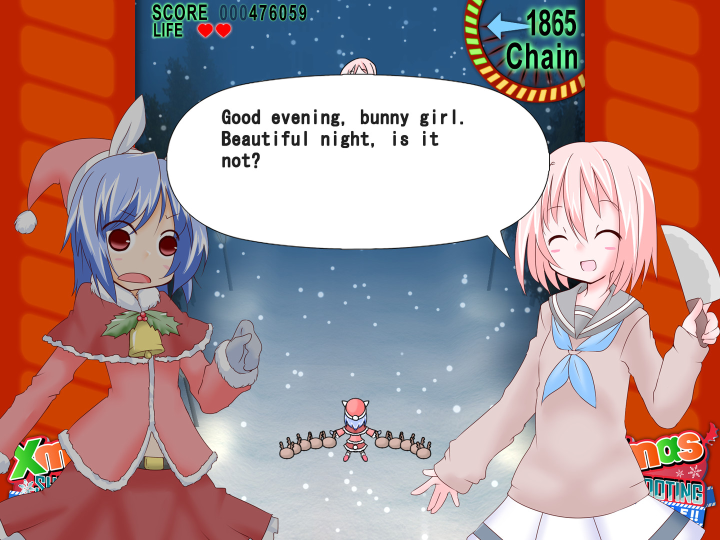 Getting the right combination of formations is important, because Scramble isnt shy about where it attacks you from, having swarms of enemies encroach from the rear while toy train sets surge up the sides on destroyable rails. Picking only front-heavy formations is the easiest way to ensure you never see the end of the first stage. And that means youll never do battle with that strange floating girl grasping a kitchen knife, inviting Aru to an after-game party after shes lobbed diced vegetables at her, or penned her in with exploding slow-cooker pots.

But even if you come correctly equipped, Scramble is still going to introduce you to the Game Over screen multiple times, regardless of your level of forethought. Though a decent run through the game will only cost you about half an hour or so, the miserly life count ensures progression is a grind of sorts, forcing you to replay the levels that vanquished you, honing yourself against their threats and patterns. Its still a Bullet Hell, so youre still going to be spending most of your time weaving between intricate mazes of death, though youre given every chance to survive. Theres an appreciated button put aside for slowing Aru down, giving you more control over her movement and clearly highlighting her hitbox, and extra lives are unlocked at certain score milestones that arent particularly cruel. Unless you unwisely decide to visit the harder of the four available difficulty levels. Everything there seems cruel, just in a festive and adorable way.
4/5

If you enjoyed this Xmas Shooting - Scramble!! review, you're encouraged to discuss it with the author and with other members of the site's community. If you don't already have an HonestGamers account, you can sign up for one in a snap. Thank you for reading!

© 1998-2020 HonestGamers
None of the material contained within this site may be reproduced in any conceivable fashion without permission from the author(s) of said material. This site is not sponsored or endorsed by Nintendo, Sega, Sony, Microsoft, or any other such party. Xmas Shooting - Scramble!! is a registered trademark of its copyright holder. This site makes no claim to Xmas Shooting - Scramble!!, its characters, screenshots, artwork, music, or any intellectual property contained within. Opinions expressed on this site do not necessarily represent the opinion of site staff or sponsors. Staff and freelance reviews are typically written based on time spent with a retail review copy or review key for the game that is provided by its publisher.