It would be redundant to call Exed Exes basic; it originally saw release in arcades back in 1985, and was pretty well received for its time. Much as in Xevious, which came two years before it, the idea is to scroll through a world filled with angry bugs and shoot them in the face with your space fighter until they explode. And, in achieving this, the title was okay; it was never going to rewrite the genre, but its existence also wasn't a boil on the face of arcades. As such, the home console release was commissioned, and here starts today's tangent.

8-bit gaming had to work within its hardware limitations, and find some way to justify charging large sums of money for games that could possibly be completely beaten within half an hour. For the most part, developers would take arcade games already notoriously difficult for the sole reasons of gobbling up the paying customer's small change, and continue working within the same mindset. Without the option the cabinets gave you to pump in more and more credits to keep the game going, home console versions often cerebrally limited your number of continues, and forced you to play the title over and over again each time you died. By forcing you to memorise all incoming attacks or prospective deaths, they ensured that the game's lifespan was artificially bloated. Game overs were punished with a trip right back to the start-up screen. Then had you do it over and over again.

Exed Exes is a rare port in that it gives you every chance to succeed and then some. Compared to the arcade cabinet, your ship is more responsive, the enemies are slower and your credits are infinite. When you die, you respawn right there on the spot, allowing even an awful player to just power through the game. It punishes you for death to an extent, as losing all three of your lives will blank your score right back down to zero, but it should be lauded for allowing this rare sheen of accessibility most developers showed abject fear towards showcasing.

This could be an argumentative point for purists, but I consider it a brave stance made by Micronics to rework the title for home use. Fact is, if you care for the genre and its reliance on score chasing, this title still works. Wiping your score to zero once you exhaust your meagre supply of lives is an effective way to ensure players that who care about preserving their collection of numbers will worry about every swarm of killer bees spitting bullets that surge from the bottom of the screen, or each bulbous beetle that spits out missiles. Players that don't really care can play the game however they choose and not worry about the crippling frustration that the game over screen will bring elsewhere.

It's a shame that this adventuresome mindset was wasted on a game like Exed Exes.

Beyond its expected simplicity, this is a title that does very, very little to distinguish itself. The enemies you fight in stage one are the same you'll be fighting in stage eight. The aforementioned bullet-spewing bees, kamikaze pinwheels and formation-flying arrowheads make the bulk of the army, whilst larger bugs like dragonfly and beetles appear here and there to fulfil their roles as heavy hitters. Even the cosmetic make-up of these stages never changes; you forever fly over fields of green with grey honeycomb grids layered on top from the start of the game unit the end. Observe: 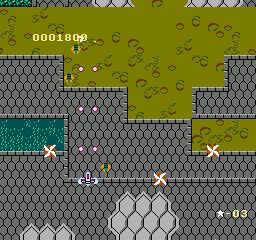 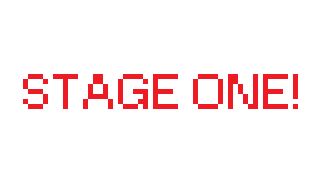 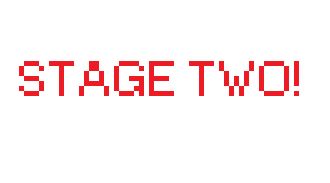 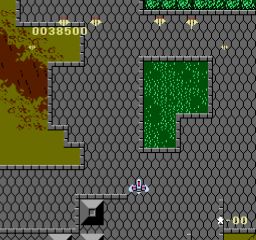 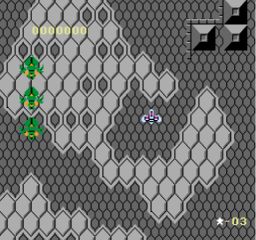 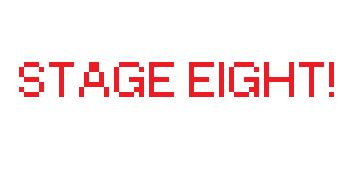 As such, the first few stages are straightforward and serviceable, and you'll be fooled into thinking that these are purposefully designed that way to ease you into the harder stages. The fact is, if it wasn't for the placement of end-of-level bosses, you would have no idea that one stage has ended and another has begun. Throwing away their rage-against-the-insects theme, boss fights take place on a bland background of pure pea green. They exist solely of differing weapon platforms, and if you don't feel like destroying them, you can just ignore them by making laps of the screen until they get bored and fly off. The first big boss battle you have mercilessly pits you against the letter H. 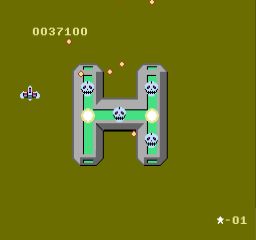 These platforms get bigger as the levels roll on, and future versions will allow the smaller enemies you fight during the bulk of the game to show up and be a nuisance throughout such encounters. So while it's wildly unfair to suggest the game doesn't get any harder, Exed Exes idea of ramping up challenge is to throw more of the same at you but in greater quantities. As such, one stage is completely indistinguishable from the next. The same awful BGM toils bravely the whole time, and it deserves a mention solely for its infinite looping efforts that include little victory tunes when you beat a boss or grab a power-up, efforts that would be extolled here if they weren't as awful as the droning main theme that never stops.

Perhaps the most memorable thing in the game is the selection of bonus items that appear as slabs of fruit bigger than your ship. Blow up a pesky ground turret and youll receive a giant mango for great justice. Murder a bulbous pupa and receive a house-sized apple. Maybe the oddest slice of surrealism Exed Exes has to offer is the Bonus Stages that are dropped into the game every other level or so, where incoming enemy waves are neutered and the screen goes black. Then, you have to pilot your way through waves of laughing skulls because... yeah, I've no idea. Grab up a POW! icon, however, and these grim harbingers of death turn into... 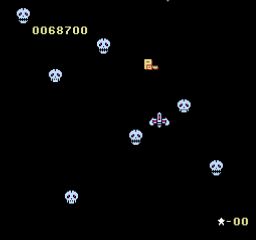 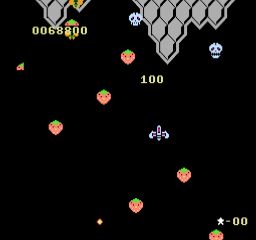 I'm not even going to pretend to understand where Exed Exes was trying to go with that weird tangent, but I do understand the efforts that were made in taking a decidedly average arcade game and in making it suitable for home consoles. It's probably the only reason I managed to remain invested enough to see this game all the way through to the end, when otherwise I'd have given up and moved on after a few Game Over screens if punished as harshly as was the norm of the times. I suppose it's ironic in a way that other games use bloated difficulty to increase their lifespan when the decidedly lacking Exed Exes ensured its longevity through understanding. It's a huge shame that all it drove me on to see is an endless tapestry of the exact same thing.
1.5/5

If you enjoyed this Exed Exes review, you're encouraged to discuss it with the author and with other members of the site's community. If you don't already have an HonestGamers account, you can sign up for one in a snap. Thank you for reading!

© 1998-2020 HonestGamers
None of the material contained within this site may be reproduced in any conceivable fashion without permission from the author(s) of said material. This site is not sponsored or endorsed by Nintendo, Sega, Sony, Microsoft, or any other such party. Exed Exes is a registered trademark of its copyright holder. This site makes no claim to Exed Exes, its characters, screenshots, artwork, music, or any intellectual property contained within. Opinions expressed on this site do not necessarily represent the opinion of site staff or sponsors. Staff and freelance reviews are typically written based on time spent with a retail review copy or review key for the game that is provided by its publisher.