Your alter ego is Postal Dude. With a name as complex as that, just imagine what the rest of his life is like.

But the days passed silently and Postal Dude was happily living in relative obscurity in a trailer park with his missus, nonchalantly allowing her to treat him like crap. Allowing her to take her frustrations out on him, to call him a failure every single day of their life together, working a crappy job at a crappy company, having nobody that cared about him. He didn't mind.

That Monday was just like all the other Mondays for Postal Dude. He got up, enjoyed the intoxicating scent of his own faeces spreading all over his comfortable trailer due to the faulty air conditioning unit, and thrived upon being called a worthless S.O.B by his enchanting wife (who imaginatively, is called Postal Dudes Bitch). It was another day in paradise. Paradise, Arizona that is. So, the man got ready for work, ready to toil at a meaningless job for a minimum wage. Today was payday, so he had something to look forward to, right? Kissing his wife goodbye, and hearing her beautiful words informing him that he better not return without the money, the man entered his automobile and turned the key in the ignition.

Only to find the car didn't work. 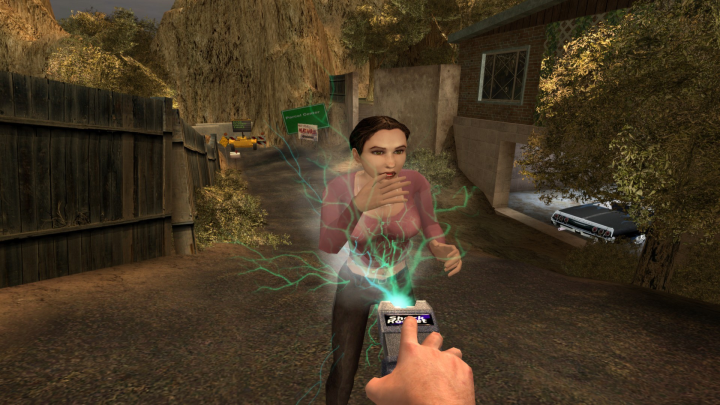 And this is where everything turns around, where everything changes for Postal Dude. Just like the fuse in his car, so did a fuse in his mind finally break. No more putting up with everything without a comment; it was time to take things into his own hands. Here is where the introduction ends and the real game actually starts and you take over, governing Postal Dude's actions.

Instantly, you can start your happy butchering of the town's people, snapping their heads clean off with a well placed shovel blow while painting the town red. You could play it nice and try to fulfil the missions given to you (and will have to at some point if you want to finish the game). These missions vary from «Normal» -- collect your pay cheque, buy stuff at the general store to «Abnormal» -- more colourful objectives like going to the graveyard to pay respects to your dear departed father. You do that by urinating on his tombstone.

Whats worth mentioning is that Postal 2 has a wide amount of freedom to it and it will take quite some time to explore all of Paradise which is separated into suburbs, some of which are closed until the game's plot decides its time to open them. Youll find many places of interest which you might have fun exploring. The mall for instance, the library or perhaps the local crack house if that is your forte. 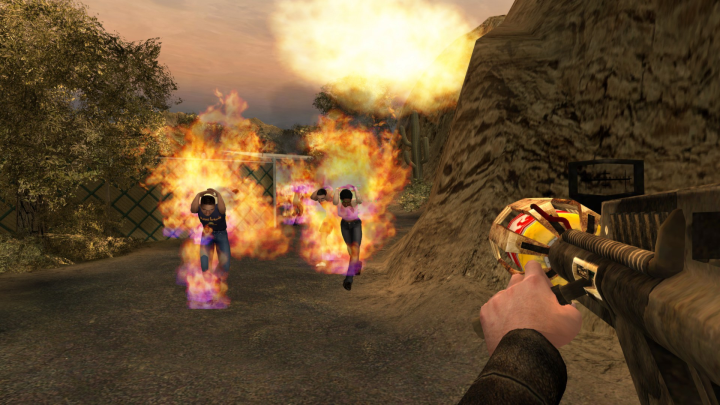 The fun part is that things change the further you are in. The game is designed so that its played throughout a five day span, from Monday to Friday and every fresh day has something new to catch Postal Dudes eye . You might find that the town's people are much more aggressive towards you on Thursday then they were on Monday, for instance. You might, in some primitive way find it funny to take a piss from a bridge on an innocent pedestrian's head. While all the early stages of the game would produce a shriek of panic from the civilian, perhaps a bit of vomiting too, as the game passes, that same passer-by might take a shotgun out of their jacket and fill you with buckshot before returning the urinating favour.

The weapons you get to slug around while doing all this contain a few pearls among them. While there are normal weapons, like revolvers or machine guns, you will find more unique ones, like the cow's head which spreads diseases to anyone who comes near it. Or, perhaps, you might find it endearing to use a cat as a silencer for your gun by sticking the said object in the unfortunate feline's rear.

All of is more than likely to produce a deranged smile, and I guarantee that you will have your fun with it. The graphics are clean, and the bodies fly away in a realistic fashion, showing off some notable ragdoll physics when they do. However, behind the over-the-top antics lurk a number of let downs. 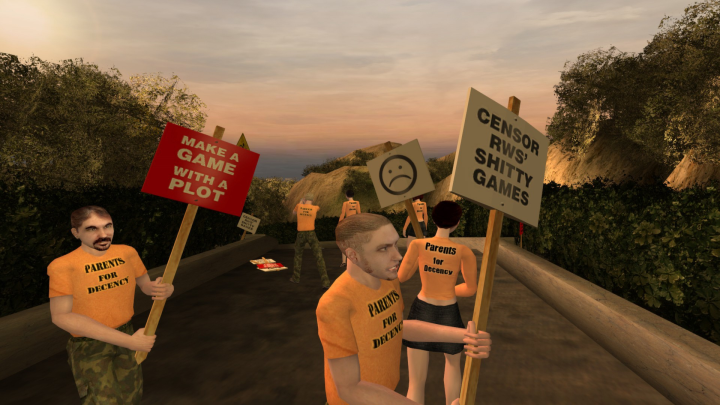 The first, and arguably the worst, is base repetitiveness. While using a cat's arsehole as a silencer might produce a giggle at first, or while slaughtering an entire group of hippies that protest against violence (by shooting everyone who disagrees) brings a wry smile at first, it all gets old. Very fast. The missions begin to get tiresome the further in you play, the load times between hubs start to drag on forever and by the end of the game you can't begin to wonder why you even started. All the thrills and amusements Postal 2 displays initially begin to feel like a chore until you can't wait to finish up and put it aside, likely to never be touched again.

Some of the things (like shooting the games developers team) seem as if Postal 2 is a product made more as a private joke by Running with Scissors. While I am sure to them it has some sort of special, deeper meaning, to the player paying for the game it loses a lot as many of the humorous jabs simply have no meaning or focus.

So, its up to you, really. If you want a cheap thrill, some, frankly, provocative issues to battle and an amusing plot, then yes, this game is worth a look.. For those I also recommend the add-on to the game called Apocalypse Weekend which is a direct sequel to the original and covers Saturday and Sunday of the game.

However, if youre looking for something deeper with a fleshed out plot, fluid action, a lack of endless loading screens and mentionable interaction with your surroundings, then look elsewhere.

For those who plough on ahead, youre given a choice: you can play this game as a maniac, shoot anything that moves and die very young or you can play the missions and be as sane as the game permits to see the ending. Youll end up a little more disturbed no matter the path you pick.

If you enjoyed this Postal 2 review, you're encouraged to discuss it with the author and with other members of the site's community. If you don't already have an HonestGamers account, you can sign up for one in a snap. Thank you for reading!

© 1998-2021 HonestGamers
None of the material contained within this site may be reproduced in any conceivable fashion without permission from the author(s) of said material. This site is not sponsored or endorsed by Nintendo, Sega, Sony, Microsoft, or any other such party. Postal 2 is a registered trademark of its copyright holder. This site makes no claim to Postal 2, its characters, screenshots, artwork, music, or any intellectual property contained within. Opinions expressed on this site do not necessarily represent the opinion of site staff or sponsors. Staff and freelance reviews are typically written based on time spent with a retail review copy or review key for the game that is provided by its publisher.