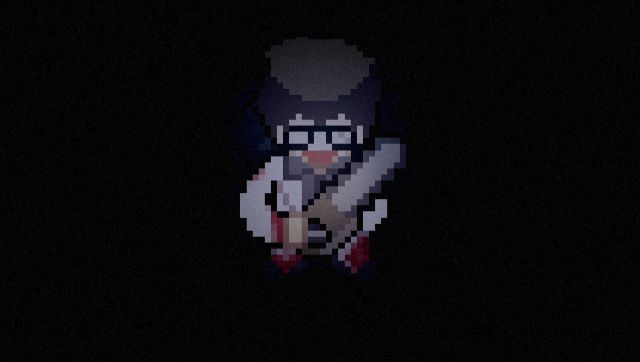 Mad Father begins by showing you two pieces of its setting--an immense countryside mansion--that set the tone for the entire experience. One features its eleven-year-old protagonist, Aya, standing outside her father's laboratory. Light from a flame-lit sconce dances off dark stones walls while she waits for him to open the door and answer her calls. He eventually addresses her briefly and sends her off, returning to his work and the blood-curdling screams that come with it...

The previously described first shot promises a hidden sinister agenda, and the second screen confirms it. You see the titular father and his assistant converse in his blood-spattered lab. You don't know yet what kind of awful things the middle aged man is up to, though you should be able to guess. Obviously it's nothing good, and Aya will be the one caught in the horrifying middle of it...

It isn't long before Aya gets out of bed to find corpses shambling through the halls, accompanied by murderous dolls holding all manner of weaponry. This is where you take control, guiding Aya out of harm's way while occasionally completing QTEs in a top-down perspective. Some of them require you to input various directions before you creep to safety, while others pop up quickly and expect just one correct response. You might at first believe this title wouldn't dare give this child a brutal, gory death. However, that assumption dies screaming when you press "down" instead of "left" during a stealth segment, and watch while a doll twists Aya's head all the way around.

...or drops from the ceiling and impales her.

...or delivers a hatchet to the forehead with a squelchy thud. 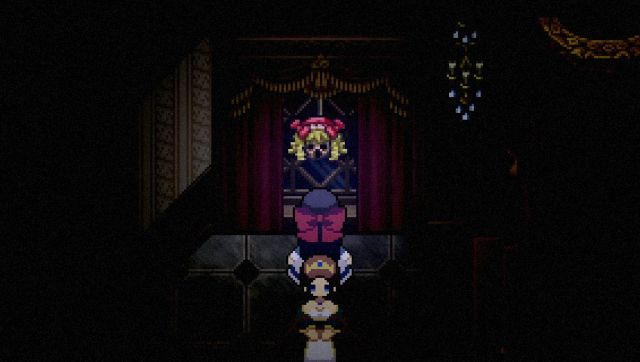 The point is this game isn't messing around. Aya's life is at stake, and her slip-ups won't be pleasant in the least. If anything motivates you to tread carefully and think before taking action, it's watching this girl collapse into a red pool over and and over again... I know everyone loves to write off visceral scares as lower tier frights, but few realize how effective simple shocks can be when handled effectively. In that respect, Father's gruesome fates deliver, eliciting exactly the kind of effect they should from players.

I know this sounds like a cheap appeal to emotion, as if the game presumes you will care about her well-being simply because she's a child. Some stories fall into that trap without realizing that they're forcing their audience to root for a shallow or irritating main character. Thankfully, Aya is neither of those, as her youth and naivete help to complicate the situation a bit. You see, Aya's main objective here is to find her father and ensure his safety. However, as she advances through the tale, she begins to discover the truth about her dad and his experiments, and questions whether or not he is worth saving. Regardless of what she encounters, she still loves her father and can't give up on him.

The thing is she has to meet the people her father has wronged face to face quite often throughout her travels, be it vagrants he brought home to torture or dogs he procured for testing. Some of them manifest as foes, and Aya has to be the one to experience their fury and regret. Others, however, appear as normal NPCs who give the girl side quests to complete. Most of these are fairly simple chores, consisting of straightforward fetch tasks. Others require you to complete puzzles, like examining numbers of certain items found throughout the house in order to uncover the code for a combination lock. 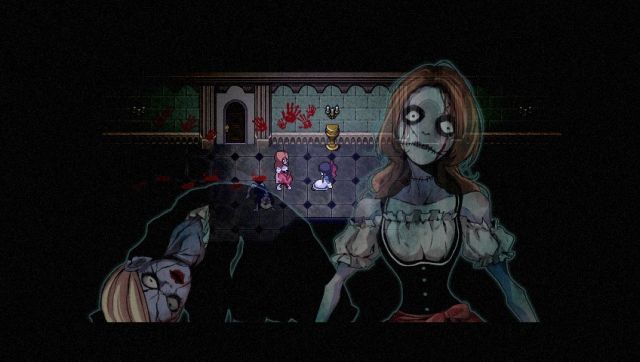 Father also constantly hits you with the usual survival-horror inventory puzzles, using them as motivation to explore the premises. That way it can send you into dark tunnels where hiding dolls wait to stab you, or a reception room where another killer toy leaps through a window to hack you to bits. Even when you don't encounter a monster, the home stands dimly lit enough to keep you on edge. You often wonder what could lie outside of the tiny globes of light that illuminate the environment or behind unseen corners. Only pitch blackness lies outside of the soft glow of candles and lanterns, and it's easy to let your mind wander when you can't see what's there. You might glimpse a patch of shadows and wonder if one of your father's victims isn't waiting patiently there, all twisted and ready to rip anything living apart. Then again, it's not as if this game doesn't give you reasons to be paranoid, as nearly every room provides something that means to kill you...

The immense size of the house only adds to that sense of out of sight fear and uncertainty. With so many shadowy passageways, guest rooms, hidden chambers, and secret nooks that could be full of unspeakable creatures, an unshakable dread comes over you: you're alone and horrifically outnumbered, and your chances of survival are minimal. That notion also shines a spotlight on daddy's sins. If his experiments lead to a massive mansion chock full of maniacs and depraved ghouls, then how much wickedness had he wrought in his lifetime? Again, that might add weight to Aya's ultimate decision regarding whether or not her dad is worth rescuing...

After skulking through myriad hallways, surviving questionable odds, and solving puzzles, you eventually come to the intense finale, where you will run for your damn life. I won't get into the details, but this adventure sure knows how to conclude with a heart-pounding climax, complete with a couple of surprises that pop up before the curtain call. 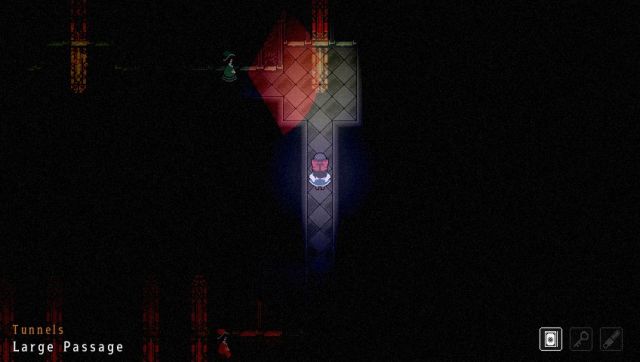 After the credits roll, you take inventory of the experience and realize something: it's mostly comprised of well-worn horror tropes. Think about it: a mad scientist, a creepy old house, killer dolls, zombies, a chainsaw-wielding killer... These devices crop up often in the genre, but here we see them in a fresh light. For instance, the previously discussed chainsaw murder isn't a backwater yokel, and "creepy old house" isn't haunted in the traditional sense. All developer sen did was rework these concepts and cast them in a slightly different light, thus breathing new life into tired, old ideas.

Mad Father brings fantastic thrills, visceral scares, and a wonderfully twisted story, all while making use of familiar elements. At its core, it examines familial love and how some humans are sometimes willing to ignore the cruel natures of those they adore--especially parents. It examines the side of people we see, and compares it to what they do truly when doors are closed. It's simple enough in the right ways, making it easy to pick up and play. However, it's also complicated enough in some places that it doesn't feel like a mere retread of older concepts, even if it does reuse such material.

If you enjoyed this Mad Father Remake review, you're encouraged to discuss it with the author and with other members of the site's community. If you don't already have an HonestGamers account, you can sign up for one in a snap. Thank you for reading!

© 1998 - 2022 HonestGamers
None of the material contained within this site may be reproduced in any conceivable fashion without permission from the author(s) of said material. This site is not sponsored or endorsed by Nintendo, Sega, Sony, Microsoft, or any other such party. Mad Father Remake is a registered trademark of its copyright holder. This site makes no claim to Mad Father Remake, its characters, screenshots, artwork, music, or any intellectual property contained within. Opinions expressed on this site do not necessarily represent the opinion of site staff or sponsors. Staff and freelance reviews are typically written based on time spent with a retail review copy or review key for the game that is provided by its publisher.