Used to be I could just tell you a release like X-Morph was a scrolling shooter, and it would still be a pretty cool time. Rather than take up the obligatory lone-fighter-versus-alien-invasion route, it flips the script and has you become a floating alien conscience thats transferred to various extraterrestrial invasion sites. Looking to harvest Earths natural resources, the aliens dispatch massive harvester drills to bore into the planet and suck away everything of worth. They hadnt really considered humanity a threat; they casually note that there seems to be intelligent life upon the arrival of their first core, and bring you online to deal with it. And so its your job to stop humans from saving their planet, as they throw increasingly varied military options at you. Attack helicopters, APCs, hulking tanks, mech walkers, stealth bombers  as humanitys desperation mounts, hardier forces are dispatched in greater numbers.

Youre pretty well equipped to deal with a lot of whats thrown at you. Your ship can scroll through several different types of weaponry, with new options unlocking as the game progresses. You can flip between simple laser blasts that zero in on any target, or try more specialised kits for specific threats, like using guided missiles to take out fighter jets, or dropping bombs on pesky tank conveys. But youd be doomed if you tried to take on the entire army on your own; they have you hugely outnumbered and have the potential to overwhelm you effortlessly. So, to even the odds up a little, X-Morph isnt just a scrolling shooter; its also a tower defence game. 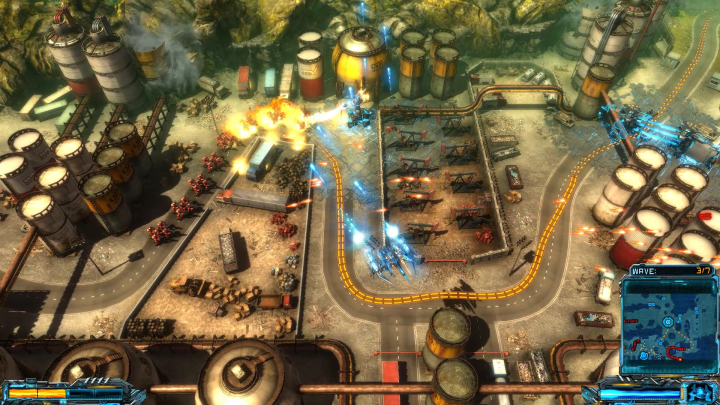 By switching your ship to ghost mode  which effectively cloaks you, makes you untargetable and lets you move through solid objects  you can have a go at placing turrets. You can do this both on the fly and at the start of every wave. Its an interesting take on the genre, and one that seems to work better than perhaps it should; your harvester sits in the core of the map, and there are defined paths that the military will take to reach it in their efforts to destroy you. The turrets biggest job is to block the most direct paths available to the convoys, forcing them to snake their way through a series of ruined streets while both you and your placed artillery plug away at them. It all starts off pretty easy; you can manipulate the advancing troops into choke points, and then stick a bunch of turrets there to blast them leisurely, or chip away at them slowly as they crawl towards you, making them easy targets to mop up directly. But things never stay so simple.

As the military start to get to grips with the surprise attack, they find new and interesting ways to make you suffer. Previous barriers are rendered moot by platoons of mech jumpers who ignore terrain and march right to your core. Most early air threats arrive ad hoc, but ignore the harvester and attack you directly. Soon, that will change and youll have to start placing anti air turrets among predicted flight paths to fend off swarms of resupplying helicopters and huge bombers. New paths open from newly activated corners of the map, stretching your resources and forcing you into a more active role. You can give yourself a better chance if you collect the debris of destroyed enemies, offering you more resources to employ more turrets, but the whole time youre collecting, youre not shooting at something, and the army slowly etches closer to your core. 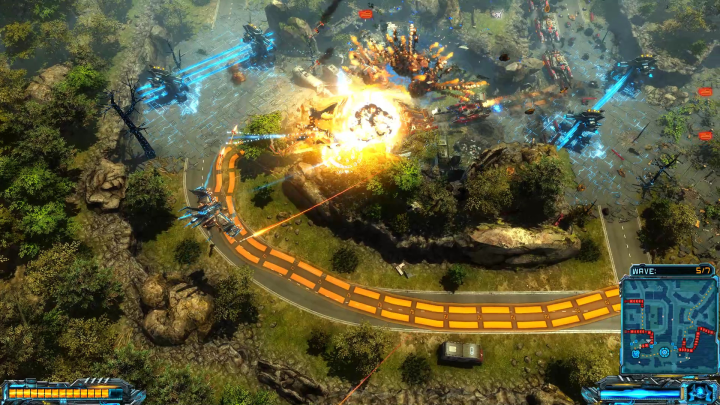 Its an additive juggling act. You wont get very far trying to play X-Morph as just a shooter or just a tower defence, because those tactics alone will see you overrun in no time. Your ship needs the turrets to redeploy and slow the never-ending trickle of enemy forces, and those turrets need your superior fire power to finish off hardier foes and loot their corpses. That the two genres are able to work so symbiotically makes them both feel fresh and renewed. You still need to think tactically and reform defence grids on the fly to deal with an ever evolving threat, and you still need twitch skills to flit through a wall of bullets and come out the other side firing plasma into the flanks of enemy fleets. Things are never static, but with a bit of careful planning and decent piloting, you feel like you can just about ride the wave to victory. And then the boss battles come.

Theres not one every stage, but landmark sites will kick up some nightmarish military giant, like a spider-legged weapons platform, or a town-sized tank. Theyll destroy towers like theyre not there, let loose flurries of missiles to pick at your cores defences from afar and force you into a chaotic tap dance across both genres. You could stop the spider platform if you destroy all four of its legs, for instance, but you can also chip away at its weapons to make it slightly less of a threat. The tank will regularly fire a swarm of missiles that will ignore you and head right at your core. With a bit of chicanery, you can arrange a gaggle of anti-aircraft turrets to neutralize them. But while the tank is left unchallenged, its positioning its massive main cannon to make powerful long range strikes you have no hope of deflecting. 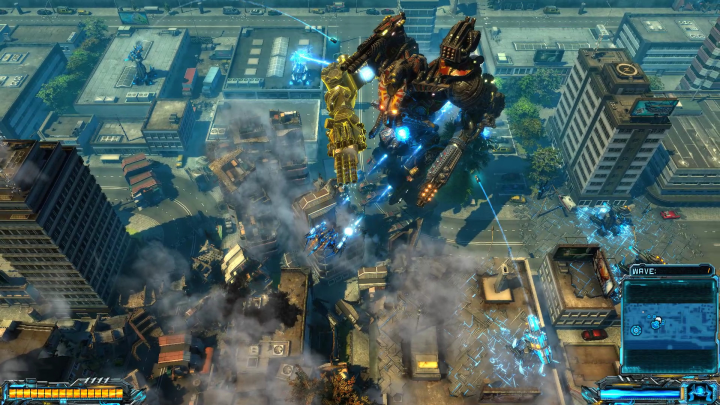 Rarely do you get the chance to sit back and admire the chaos around you because, take a second to feel smug about the barriers youve placed or the bottlenecks youve constructed, and something will slip past, or come at you from an unexpected angle. X-Morph is the best kind of exhausting, because when your defences fall and your harvester burns, you know that its completely your fault. Youve not covered an angle well enough, or your defence is lopsided, annihilating the vehicles from the East, but you didnt syphon enough away when new inroads were made from the West late in an invasion. Or you spent too much time attacking directly and not enough time collecting debris, and now cant afford the towers you need to stay alive. Or, visa-versa; you spent too much time gathering and, without your direct aid, the military have swarmed past your towers and are plugging slugs into your core.

Too many times my plans fell apart and it was because of my own oversights. Bombers destroyed the AA points Id constructed to stop them because I placed them directly in their path. Rerouted waypoints were too sparse, and mammoth armoured tanks took and shrugged off enough of my static offense that the convoy of rocket-packing jeeps made it to the core relatively unscathed. Success means embracing both genres rather than just trying to excel at one. Who knew it wouldnt be global warming or a zombie apocalypse that would signal the end of the world, but alien-themed multi-tasking.
4/5

If you enjoyed this X-Morph: Defense review, you're encouraged to discuss it with the author and with other members of the site's community. If you don't already have an HonestGamers account, you can sign up for one in a snap. Thank you for reading!

© 1998-2021 HonestGamers
None of the material contained within this site may be reproduced in any conceivable fashion without permission from the author(s) of said material. This site is not sponsored or endorsed by Nintendo, Sega, Sony, Microsoft, or any other such party. X-Morph: Defense is a registered trademark of its copyright holder. This site makes no claim to X-Morph: Defense, its characters, screenshots, artwork, music, or any intellectual property contained within. Opinions expressed on this site do not necessarily represent the opinion of site staff or sponsors. Staff and freelance reviews are typically written based on time spent with a retail review copy or review key for the game that is provided by its publisher.