Hidden Dragon: Legend has a clear idea what it wants to be. Its a delightfully unapologetic product of its developers culture, for one. Until early 2015, there was a ban on exporting Chinese console games to the worldwide market (one must ensure all effort is focused on releasing a new MMO every other day, after all), so MegaFun Games first order of business was to give the world a 2.5D hack and slasher set in the imperial era of Tang China. In terms of pure exhibition, it has class to spare, ensuring it never places you in a drab, uninspired setting when it can instead wow you with eye-popping locations. You can run through the remains of a razed town, dashing across the spines of red-tiled rooftops, or take to the creaky wooden scaffolding that encircles the crumbling stone edifices of warriors past. You can travel through bamboo groves that lead to isolated and long abandoned villages which sit on the outskirts of mammoth stone forts illuminated by an army of lanterns.

The game wants to impress, often bullying the now groaning Unreal engine along the way. Its all well and good standing around and admiring the backdrops, but the catalogue of sword fights you need to progress through are often things of pure spectacle. Starting by relying on only the most basic of combos, you need to slowly upgrade your swordsmans arsenal by investing the souls of the slaughtered into new builds and flashy execution methods. Youll not get very far with the pedestrian weak, weak, weak, strong, strong combo you hold by default (and will get exactly nowhere with uncultured button mashing), which forces you to utilise a variety of attack options that turn the best fought duels into orgies of air juggling, rush counters, animation canceling, combo breaking insanity. 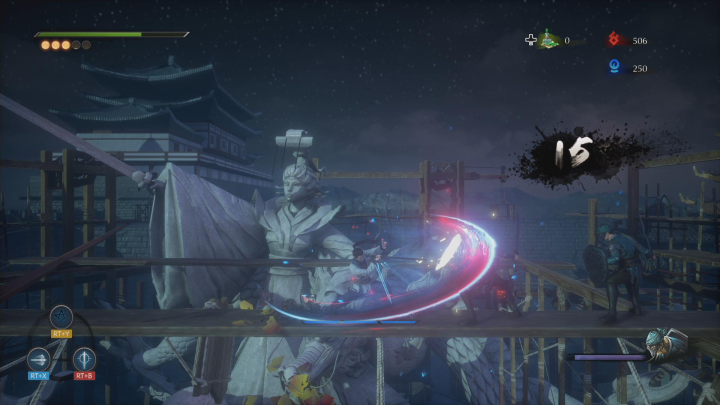 Theres no block button, so the only way to avoid attacks is either to get out of the way or time a rush counter that leaves foes open for a blistering combo of you own. Its almost tactical; stray, hopeful slashes that fail to connect often leave you open to a furious enemy stab-fest, so your attacks need to be balanced and timed. Its the kind of engine where you get out what you put in; on the easier settings, you could probably muddle yourself through the game with a few favoured combinations on hard repeat, coupled with a decent grasp of rush cancelling. Alternately, by taking the time to learn a number of special attacks and what vulnerabilities they can exploit, you have the potential to chain together hit counts soaring up into the hundreds while mowing down legions of hapless assassins and cultists with style. All highlighted with neon slashes sometimes registering faster than you can see.

Mowing through an army of foot soldiers without breaking stride is one thing, but Hidden Dragon also employs the liberal use of huge, screen-filling bosses with all that old school stuff you used to love, like attack patterns and exploitable weak spots. There are also quick time events, because of course there are. At this point, getting mad at a game for awkwardly shoving these in to cinematic events as a cheap attempt at interactivity is about as productive as raging at the rain for being wet. The awkwardly-phrased point being built towards here is that the further you move away from the spectacle of the games setting and the acquired intricacies of its combat, the weaker it becomes.

Some of its exploration elements work pretty well. You can often bypass fights and obstacles you may feel are beyond you simply by taking a slightly different route: dropping into a series of tunnels burrowed through sheer cliffs or jumping atop some roofs and running past threats wholl never know you were there. Sometimes these are based around the games clunky attempts at platforming, or the use of a grappling hook that will kill you far more often than an enemys sword ever will. Youre also given the option to replay levels, which is not only helpful for grinding souls for struggling players, but also means you can revisit a sequence you once found too tough and gut its hidden wealth using a beefier character with a bolstered move set. 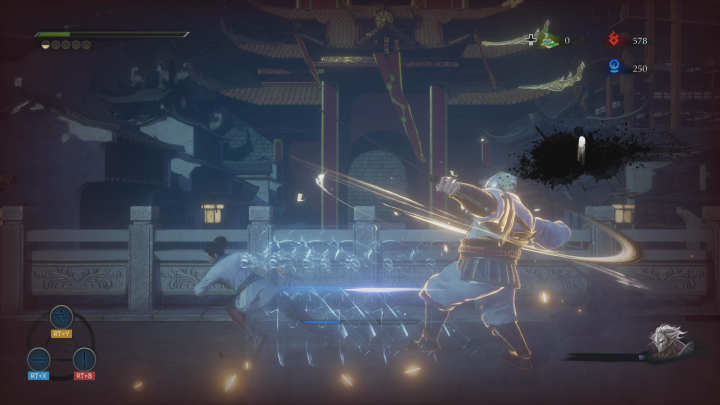 The campaign has a decent go at covering all bases. Theres a reasonable if unoriginal story here about betrayal and murder which, oh dear, uses the fact that badarse swordsman, Lu, is suffering from the convenient amnesia plot device to retell everything. Copious flashbacks to his hazy, mis-remembered past pop up at opportune moments to remind him if he should be homicidally angry with someone, while the rest of the games otherwise rich lore is told through scattered notes and reclaimed artifacts. What really smarts is that, at its best, Hidden Dragon tells its tale wordlessly and organically. It doesn't rely on the hero's clichéd memory affliction to drive the exposition, and instead lets things unfold through his interactions with the world. So it's unfortunate when the scenario writers abandon nuance in favor of clumsiness.

Its just not a particularly good tale. You wont stick with Hidden Dragon just to reach its gripping conclusion and find out what other stuff Lu might remember. If you hang around, it will be to earn a few more souls and unlock that awesome looking mid-air combo reset, or because youve got rush counters down so well youre an ethereal, unhittable ghost on the battlefield and the misery of your enemies pleases you. Stylish murder sprees, thats what this game does well... so long as youre willing to invest the time and effort to get you there. Just dont count on the rest of the game battling as hard to maintain your interest.
3/5

If you enjoyed this Hidden Dragon: Legend review, you're encouraged to discuss it with the author and with other members of the site's community. If you don't already have an HonestGamers account, you can sign up for one in a snap. Thank you for reading!

© 1998-2020 HonestGamers
None of the material contained within this site may be reproduced in any conceivable fashion without permission from the author(s) of said material. This site is not sponsored or endorsed by Nintendo, Sega, Sony, Microsoft, or any other such party. Hidden Dragon: Legend is a registered trademark of its copyright holder. This site makes no claim to Hidden Dragon: Legend, its characters, screenshots, artwork, music, or any intellectual property contained within. Opinions expressed on this site do not necessarily represent the opinion of site staff or sponsors. Staff and freelance reviews are typically written based on time spent with a retail review copy or review key for the game that is provided by its publisher.