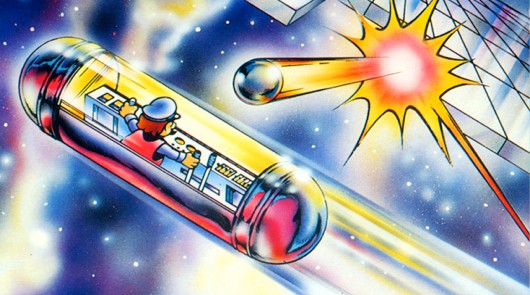 I often imagine that somewhere in Nintendo's headquarters, circa 1989, is a discarded Post-it note. I usually visualize it lying in a trash bin, buried beneath a napkin or a tissue. Scrawled on it is an important reminder to whoever helmed the development of the Game Boy brick-and-ball title Alleyway that reads: "Play Arkanoid."

Now, I don't honestly believe that the developers involved with Alleyway had never played or at least glanced at the aforementioned arcade hit. However, popping Alleyway into your Game Boy might belie as much. To its core, the game is a standard Breakout clone, bereft of fancy bells and whistles and boasting only a modest number of yawn-inducing features that aren't likely to engage many players. Oh, and there are occasional references to the Mario brand, not to mention that you see the Big M himself enter the paddle as the game commences.

Unfortunately, the tacked-on presence of Mario doesn't make up for the dearth of interesting features. For starters, there are no power-ups in Alleyway. You only fire a ball at a formation of bricks, causing each piece to vanish as it collides with the orb. As the ball returns, you must move your paddle to intercept it, taking care that it doesn't descend into the pit below you and steal one of your lives. I suppose you could say it's a solid title, mechanically speaking. The control response is tight, and the game moves at a moderate pace. The only complaint I have is that the ball's minuscule sprite can be difficult to follow on the Game Boy's pint-sized screen, which may cause you to dig out the old Super Game Boy or just emulate the title instead. 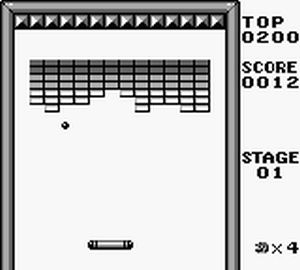 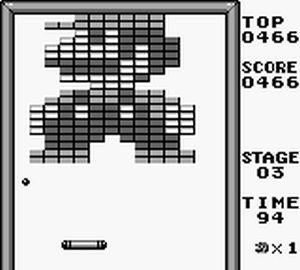 All that I covered in the above paragraph would have been a great foundation for a portable Breakout ape. From there, the developers could have crafted at least a fair title by shaking things up. Unfortunately, the game suffers from a multitude of poor decisions that do nothing to liven up the experience.

For instance, Alleyway lacks a soundtrack. Its score consists of maybe three or four BGMs, none of which play during any of the levels (save for the bonus stages). Rather, what you hear while tearing down the floating bricks is the occasional echoing chime of your sphere striking a block or the ceiling. Although the sound effects are pleasant, they're so devoid of rhythm or charm that they're maddening.

The developers did what they could to bolster the experience, sans awesome power-ups and a kickin' soundtrack, by supplying additional handicaps and special features. For instance, some levels sport blocks that scroll horizontally. Also, there are bricks in certain stages that drop downward a row after a certain number of successful returns. In some cases, the downward motion even generates new rows of bricks. The worst stages, though, involve a bare ceiling that shrinks your paddle once your ball nails it. Although it may seem like Nintendo found a neat way to spruce the game through added challenges, in truth all they did was infuse an already vapid title with a slew of frustrating constraints. So now not only is Alleyway a moderately paced, uninteresting Pong-for-one, but it's also a bit tricky and irritating. 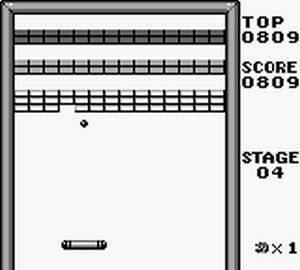 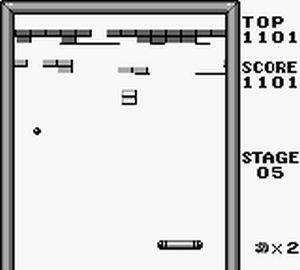 The worst moments, though, occur when there's a single block left to destroy. Usually, offing it amounts to smacking the ball and waiting, hoping that the sphere connects with the rectangle. More often than not, you'll miss and enter a limbo-like state while you wait for the ball to finish bouncing around at its not-so-emergent speed. Eventually, the orb returns and you give it another good smack, this time summoning all of the rudimentary geometry you can muster in a vain effort to setup a proper angle by positioning the paddle just right. Instead, you'll likely end up sending the ball back upward at the nearly the same angle as before, and once again you'll slip into that momentary coma of boredom. See, that's why titles like Arkanoid and DX-Ball feature blasters and other neat special power-ups: because few gamers are willing to suffer through tedious BS like this.

Alleyway is yet another forgettable, bland Game Boy title that serves a questionable purpose. Like many games on the tiny machine, it features only the bare minimum of what its genre can offer. It's almost as though the Game Boy era developers figured that they needn't put much effort into games released on a platform that lacked the specs of current systems. As later titles would prove, Game Boy was a capable platform for its time, so there was little reason for developers to crank out devolved versions of contemporary hits.
2.5/5

If you enjoyed this Alleyway review, you're encouraged to discuss it with the author and with other members of the site's community. If you don't already have an HonestGamers account, you can sign up for one in a snap. Thank you for reading!

© 1998-2020 HonestGamers
None of the material contained within this site may be reproduced in any conceivable fashion without permission from the author(s) of said material. This site is not sponsored or endorsed by Nintendo, Sega, Sony, Microsoft, or any other such party. Alleyway is a registered trademark of its copyright holder. This site makes no claim to Alleyway, its characters, screenshots, artwork, music, or any intellectual property contained within. Opinions expressed on this site do not necessarily represent the opinion of site staff or sponsors. Staff and freelance reviews are typically written based on time spent with a retail review copy or review key for the game that is provided by its publisher.