The Legend of Zelda: A Link to the Past is considered one of the best SNES games by almost everyone. But that was 30 years ago, gaming has evolved. Yes, nostalgia can make us blind, but surely there are things we have learned since then that would make the game better. Or push the overhead 2D fantasy adventure genre forward. Indies have presented us with many clones of famous games with updated elements, some perhaps surpassing the originals. Perhaps that was what Blossom Tales was going for. After all, this game is very blatant in being a homage to LttP; it even references Zelda in the introduction. Yet, while there may be some pleasant vibes here, on the whole this game feels like a hollow link to Zelda's past rather than a modern imagining of a classic.

I mean, this is going to be a pretty negative review for an ok game. But when you're trying to ape a classic, shouldn't it be better than just "ok"? And when I am playing it, shouldn't I be enjoying the game itself, rather than being reminded on why Zelda is so great and why it's not just the most recognizable in a formula that could be an automatic winner? I mean, the formula itself is there. You have a kingdom in peril. You have a sword. You have a large overworld with dungeons scattered throughout. There's pieces of heart containers to collect, money to spend on items, secondary weapons like bombs, boomerangs, and bows (seriously, I told you this was blatant), optional side quests that can power up these secondary weapons, collectibles, bad guys, bosses, puzzles, it's all there. On the surface, this seems just like you're playing a Zelda game. 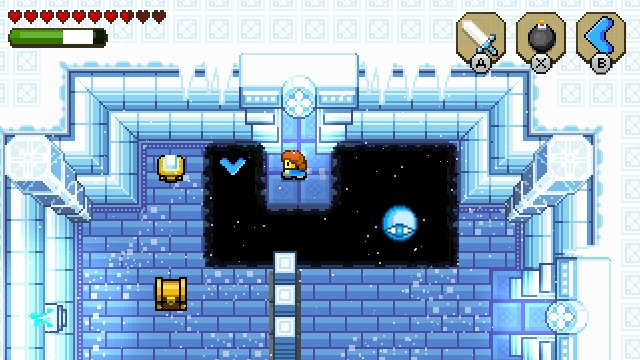 On the surface. But question for you: how important is exploration and the thrill of discovery to you in a Zelda game? Because here, it's virtually nonexistent. As with many of the latter Zelda games, the overworld is explicitly segmented, and you are absolutely blocked from visiting areas before the required moment. And not even in the gamelike way of not having access to the proper weapon, sometimes it is just "the lift is broken, oh wait, it just got fixed at the exact moment you are forced to go there." And a yellow square shows up on your map to tell you exactly where to go, just in case you couldn't figure out which of the nine screens you are allowed to explore has the next stop. Meanwhile, the dungeons are even worse: they are all 100% linear. Only one possible way to get through, and no possible way of getting lost or the thrill of seeing it all come together. Sure, some wind around in loops and such to give it a sense of complexity, but the second dungeon is literally just a long series of rooms. Kill all baddies, complete the puzzle, kill all baddies, complete the puzzle, navigate the hazards, kill all baddies, miniboss and item, repeat, repeat, repeat, repeat... I wish I was exagerrating, but sadly I'm not. And thrill of discovery? Many, MANY pieces of heart are simply bought in a store. Others are rewards for simple "collect 20 tokens" type quests. Others are simply inside someone's house sitting right there in the open. Of course, not everything is like this. But unfortunately, it's a sufficient amount so as to make normal exploration feel less valued in comparison. And when the game is so linear, that cuts out the desire to explore even more.

Well, hey, maybe exploration isn't a big deal to you (there are many extremely linear Zelda games after all) as long as the puzzles are good. But, well, it's more of just repeating the same few styles over and over. Zelda is sometimes mocked for lighting torches and pushing blocks too many times. But here, you have 1) "Simon says" puzzles of repeating a pattern shown to you, 2) Push blocks in a maze to the proper switches, 3) push sliding blocks!, 4) walk over every tile in a maze exactly once. That's the majority of them, just repeated over and over. You can't get complex with Simon says, and the block pushing and tile walking puzzles are never challenging. Yes, there are some that aren't in this category. One I actually liked was trying to hit all of the switches in a limited time, as it often required using different weapons on each switch. I'll give them props for that. But sadly, many of these puzzles were the type we've seen before, and didn't exactly stretch your gray matter very far. Or at least spice it up with different styles.

But y'know, the puzzles are really only there to break up the combat, which is where the REAL action is. But the combat in Blossom Tales is... serviceable. You have the basics - a sword with a simple combo move, as well as the ability to charge it up for a spin attack. And, as a non-Zelda bonus, you can follow up that spin attack with a leap and a strike! Except it's hard to control exactly where you end up, so maybe you won't really use it. But then again, it seems to hit enemies even if they are only generally in the same area, so maybe it's still worth it? Whether you use it or not, just know that it doesn't feel precise and intuitive. You also have your secondary weapons, which have limited uses based on a magic meter (that constantly refills, no need to find magic bottles or whatever). The cooldown aspect is at least unique, and they definitely have their uses. But they certainly aren't balanced, as once you get the boomerang or fireball there is no need for anything else (even your sword!). Meanwhile, for regular mooks, Blossom Tales aims for quantity over quality, as many rooms just inundate you with dozens upon dozens of easily dispatched baddies rather than something with clever AI or that hits like a truck (honestly, I don't think there's any damage scaling at all; everyone from bosses to minor enemies seem to take off half a heart). It means you swing your sword or fire your arrows a lot, but it doesn't really lead to any additional challenge. Bosses are better of course, and do have fairly diverse movesets and take plenty of hits to dispatch. And, unlike Zelda, they are more about recognizing patterns and wailing on them rather than the puzzle, item-based boss challenges. So that's cool. Still, it could use a greater challenge, as hearts are plentiful, potions are plentiful, and I never felt in danger of a game over.

So not even the combat is that special, but at least it has the charm of an aesthetic that an epic adventure needs. Well, ok, more of a simple bedtime story than an epic. In fact, that's what it is - a grandpa making up a story for his two grandkids. Which means it's a simple fairy tale - the Blossom Kingdom saw its king be cursed into a deep sleep, so it's up to the newest knight, Lily, to brave the land and find the three conveniently placed ingredients to save the king. This format results in a few cute aspects. Occasionally the grandpa will let his two kids pick what obstacles Lily faces, which means you get to choose what bad guys appear. Or if the kids complain that the challenge was too easy, a new challenge will suddenly appear. It's cute, but ultimately these are just a few moments rather than a significant theme. If you wanted a dramatic and deep story, it's not here, but clearly it isn't aiming for that.

And maybe that's what Blossom Tales is. It's a basic fairy tale without challenging combat, without challenging puzzles, and without challenging exploration. Thus, as a game, it acts more as an introduction to the genre for kids rather than something made for long time afficianados. Of course, are kids really interested in low-detail sprite based games anyway? And for that matter, I feel the need to put on my grumpy old man hat and point out that as a kid, MY introduction was the confusing, challenging original NES Zelda and that worked out just fine. Maybe it's the other way around, a game made as a cozy, nostalgic feel for people who don't want any stress. And that's fair too. If that's what you want, Blossom Tales will likely give you what you need. But as someone looking for a strong Zelda style experience, I was left wanting. Despite playing Link to the Past possibly dozens upon dozens of times, I will likely end up playing it yet again sometime in the future. And sadly, I can't say the same for Blossom Tales.

If you enjoyed this Blossom Tales: The Sleeping King review, you're encouraged to discuss it with the author and with other members of the site's community. If you don't already have an HonestGamers account, you can sign up for one in a snap. Thank you for reading!

© 1998-2021 HonestGamers
None of the material contained within this site may be reproduced in any conceivable fashion without permission from the author(s) of said material. This site is not sponsored or endorsed by Nintendo, Sega, Sony, Microsoft, or any other such party. Blossom Tales: The Sleeping King is a registered trademark of its copyright holder. This site makes no claim to Blossom Tales: The Sleeping King, its characters, screenshots, artwork, music, or any intellectual property contained within. Opinions expressed on this site do not necessarily represent the opinion of site staff or sponsors. Staff and freelance reviews are typically written based on time spent with a retail review copy or review key for the game that is provided by its publisher.