Elliot Quest, an action/adventure title that recently arrived on Steam, was described by its developer as "Zelda 2 inspired." There certainly are enough similarities to justify such a comparison, but the game is reminiscent of other favorites from that 8-bit era, as well. Playing through it, I was reminded also of Battle of Olympus and Kid Icarus, with a bit of Metroid thrown in for good measure. These are all good influences.

The adventure begins with your character standing around at the edge of a forest. You can immediately explore the surrounding area, in 2D platformer style, or you can exit to a world map and wander around a bit. Points of interest are indicated by an '!' when you pass over them on the map, meaning you can investigate and find more action stages. A smattering of enemies wanders the map, and bumping into one of the brutes yields a similar result. 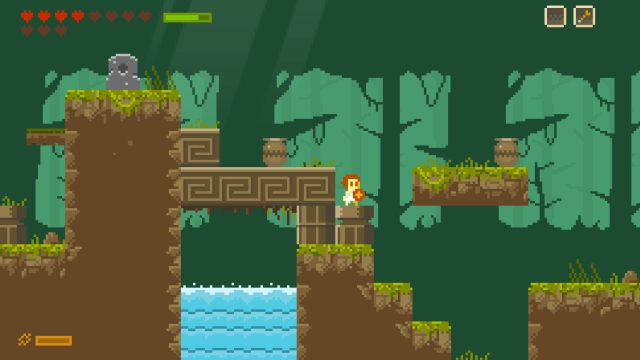 Early on, players have to make their peace with the fact that the game doesn't offer much in the way of explanation. They're left to sleuth things out on their own, which for the most part I actually like. I'm sick of unnecessary hand holding, so I was happy when I was permitted to immediately start running around and shooting enemies with my little bow and arrow. Along the way, the backstory is filled in through brief, eerie flashbacks. Something bad went down, and a young man named Elliot is playing hero (maybe) as he wanders around an island on a way to a showdown with a mystical beast called the Satar.

Like I said, not a lot is explained, which becomes a slight problem when you can't figure out where to go next. Often, you'll have a few options, and you have to explore them all for a bit of trial and error before you find the path that leads to a new ability or item. The new loot then allows you to return to one of the other points you investigated prematurely, and you might find--for instance--a weak wall that you can eliminate with your new bombs, or a hanging collection of moss blocks you can fly through in a whirlwind of speed. I like the "Metroidvania" feel, but I wish that sometimes the rewards were more significant. Stages aren't interconnected, so a lot of times what you're really doing is revisiting an area you already mostly explored, just to find a treasure chest with some coins. You very rarely find anything better than that but sometimes you might, and that means it is in your best interests to scour the whole island multiple times.

A related issue is that a lot of paths are blocked by rubble that must be removed with bomb blasts. When you first find the bomb bag, you gain four explosives. That doesn't feel like nearly enough, and random enemies don't drop them like they would in The Legend of Zelda. I spent ages wandering the world after my first (entirely frivolous) explosive rampage, trying to find more bombs so that I could clear the numerous weak walls I kept stumbling across, only to eventually figure out that I had to return to the depths of the cave where I first discovered them for a refill. This situation fixes itself in time, when you can meet a merchant in the desert and buy a larger sack, but I'm still not a fan of that particular stumbling block and I was still running out of bombs even in the final areas. 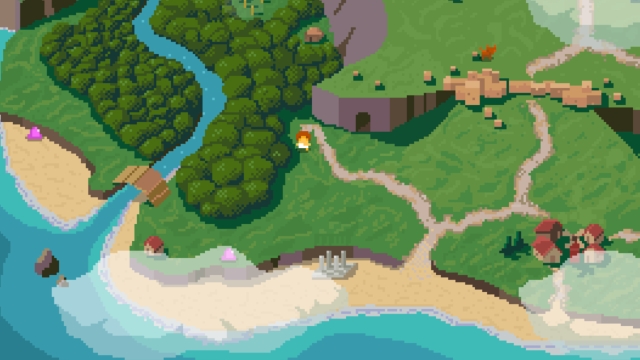 The good news is that if you do get lost, you're still likely accomplishing things. Elliot Quest uses a leveling system similar to the one featured in Zelda II: The Adventure of Link. You kill monsters and when you go up a level, you can assign a token in one of several categories for a slight boost. It's possible to increase the range or rate of fire for your bow, or to improve your ability to land critical hits, or to enhance restorative items you can pick up after slaying enemies or breaking pots and such. If you fall in battle, you also lose some of the experience points you gained, meaning cautious play is rewarded even though you can't run out of "lives" (you simply return to the last tombstone you touched, which saves your progress in dungeons and elsewhere).

Happily, Elliot Quest is difficult enough that you can't play like a total scrub and expect to get anywhere, but not usually so challenging as to feel unfair. If you're having trouble progressing in a particular direction, you can know that you either don't have the required gear (maybe come back to that hallway with all of the projectiles once you find the shield), or you just aren't playing wisely. There's a nice variety of foes, including a lot of slime and frogs and bats, but also a few more unique adversaries. Environmental hazards also play a role, including bottomless pits, sliding spikes and so forth. Sometimes the environments do feel a bit sterile, but that actually contributes to the haunted feel that pervades the island ruins you're navigating. The final areas also play host to some rather devious traps, so bring along your thinking cap.

As you wander the world, you are accompanied by a sense of almost oppressive loneliness. The world in Elliot Quest is far from cheery, with dark color tones that paint a portrait of a punishing world. The visuals feel decidedly 8-bit, and so does the music, but in the right ways. Zelda II: The Adventure of Link featured a spectacular soundtrack that made every locale a little bit better, and I was delighted to find that the composer here managed to produce a similar effect. It's not quite as successful as its inspiration, I don't feel, but it comes closer than I ever would have expected and helps establish the mood. 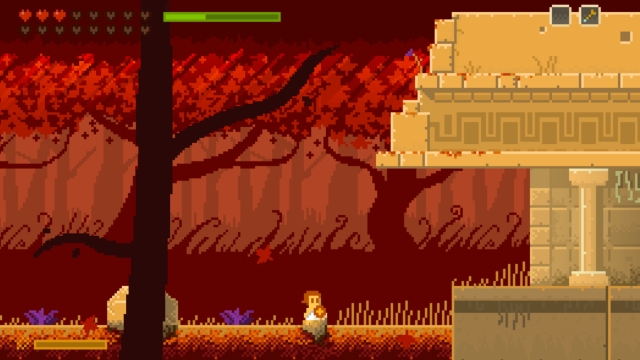 Another point in Elliot Quest's favor is its longevity. You can play for a few hours and find that you've barely scratched the surface. Some of that is due to the backtracking, admittedly, and those times when you may wander about without a clear idea where you're supposed to go next--particularly near the end--but there's also a lot of content here. Dungeons are suitably expansive, and there are enough of them to keep you busy.

Finally, I should mention that it's easy to control Elliot Quest with an attached controller. I used a wired Xbox 360 gamepad, as I tend to whenever Steam games let me, and it worked beautifully. The d-pad controls movement and the four face buttons let you access your inventory, jump, use magic and fire arrows. I did sometimes find that the character likes to stumble off ledges if you try to jump too close to their edge, leading to unfortunate deaths in the later areas because it disables the double jump ability you might have been planning to use to cross a gap. That took some getting used to, but otherwise everything felt natural, if slightly sluggish in places. I was more than satisfied.

Thanks to a meaty, mostly interesting campaign that trusts players to be both confident and adventurous, Elliot Quest is one of the most enjoyable retro throwbacks I've recently had the opportunity to play. It's by no means perfect, and you might periodically wish for a bit more obvious direction, but the thrill of exploration makes up for most hiccups and the end result should delight both newcomers and veterans alike.
4/5

If you enjoyed this Elliot Quest review, you're encouraged to discuss it with the author and with other members of the site's community. If you don't already have an HonestGamers account, you can sign up for one in a snap. Thank you for reading!

© 1998-2020 HonestGamers
None of the material contained within this site may be reproduced in any conceivable fashion without permission from the author(s) of said material. This site is not sponsored or endorsed by Nintendo, Sega, Sony, Microsoft, or any other such party. Elliot Quest is a registered trademark of its copyright holder. This site makes no claim to Elliot Quest, its characters, screenshots, artwork, music, or any intellectual property contained within. Opinions expressed on this site do not necessarily represent the opinion of site staff or sponsors. Staff and freelance reviews are typically written based on time spent with a retail review copy or review key for the game that is provided by its publisher.