Ginger: Beyond the Crystal is a 3D platformer that's more fun to look at than it is to play. That's not to say that the game is gorgeous, only that spending time interacting with it all too often feels like a chore.

There's nothing wrong with the general premise, at least. Years ago, the people communed with a goddess who kept them happy and safe. Eventually, that goddess stopped responding. Before she fell silent, she gave her followers a gift in the form of a small child named Ginger. The people raised him as one of their own. Then, several years later, a stranger came to town with a powerful crystal. The wicked object knocked the world for a loop, draining the good and pure crystals of their power and turning them a malevolent red hue in the process. Now, Ginger must cleanse the world of evil and save his tribe. 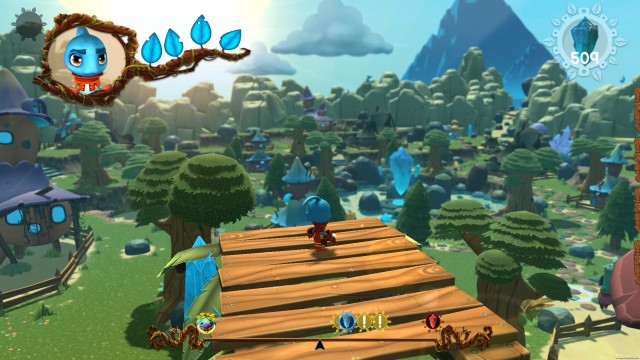 The game's world is divided into three primary regions. Each one contains five standard action stages. Initially, only a single stage is accessible as you arrive in a new region, but you can clear it and use the miniature crystals that you gather to free additional villagers, which eventually removes barriers so that you can enter another stage. Finishing levels also allows you to dive into a large red crystal and cleanse it by completing a purification stage. It's all slightly confusing at first, but you'll get used to it before long.

Although the action and purification stages are in theory the game's focus, look forward to wasting way too much time in the hub worlds that connect them. You have to run around a lot, gathering items such as wood and stone. Once you have enough supplies on hand, you can select a building to construct, which makes new cosmetic items available from a traveling merchant and contributes to your effort to access new stages. Otherwise, the structures are purely cosmetic.

The first hub area is pretty simple. You can navigate it freely and will only encounter foes during special events. However, later areas present new hazards and their layout forces you to constantly pay attention to where you're going in order to avoid getting lost. There's a map you can consult when necessary, but it doesn't appear while you are playing. You have to pause the action and check it from a menu, or else rely on a not especially helpful bar at the bottom of the screen that shows your approximate location compared to a few potential points of interest. 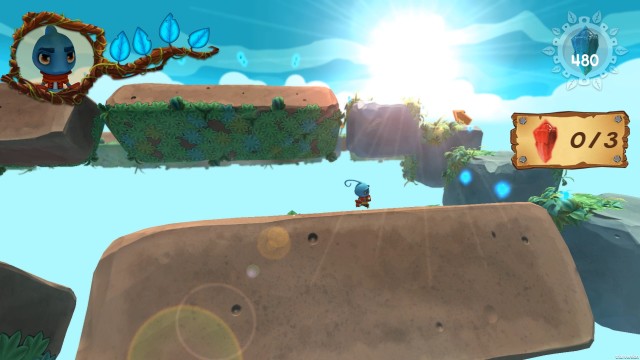 Action stages are reasonably varied without being interesting most of the time. You typically have to make your way from one end to the other, gathering little crystals along the way and defeating enemies. However, there usually are multiple routes that you must follow in a specific order. You might come to a fork in the path and try to head down a canyon, for example, then discover that weeds quickly form a wall to block you from proceeding. In that case, you must explore another route to find some weed killer, then return to the obstruction and show the nasty foliage who's boss. Checkpoints are generously placed, so you don't lose a lot of ground if you happen to die at some point along the way.

A little backtracking never hurt anyone, but some of the stage objectives prove quite irritating. For instance, one stage makes you climb along a series of platforms, breaking open beehives to collect jars of honey for a hungry bear. You have to smash five of them within the time limit, and it's easy to miss one of the jars, which means you get to start over after wasting something like a minute and a half. In another stage, you have to navigate a graveyard maze, fighting monsters while you try to find frog statues so that you can use magic to slide them into position. If you take a wrong turn, the blunder will probably cost you enough time that you have to try again from the beginning. The timed challenges are just plain irritating.

In a show of creativity, the developers introduced a variety of costumes for Ginger to acquire on his journey. You can switch between them whenever you like using the controller's shoulder buttons, and most stages require you to do precisely that. It's usually pretty obvious when you need a particular suit, because you'll find a circular patch of white light where you can stand and interact. Unfortunately, there are times when the game doesn't recognize that you're even in position, so you might have to shuffle over a patch a few times to trigger the required prompt. 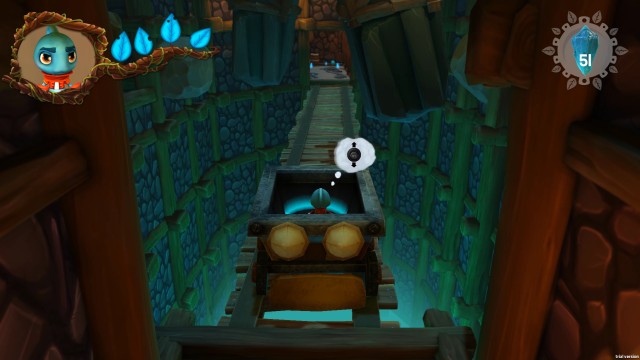 Unfortunately, the costumes aren't much fun to use. Your first real option is to become a minstrel and play your lute (or is it a guitar?), which requires you to play a memory game. You must watch a series of notes, then press the corresponding buttons to play the tune back however many times it takes to get it right. That gets tedious, and you have to do it every time you play through the stage. Another costume lets you turn into a mouse and crawl through holes, but functionally it's just a warp. You press the button and the mouse crawls through an opening to appear elsewhere in the level, or returns with an item.

Purification stages are more straight-forward and don't require you to cycle through costumes, but they find other ways to irritate. You have a limited number of lives, and there are no checkpoints. Since ledges are floating in space and usually turning and drifting in various directions, it's easy to take a leap and miss your target. Jumps are harder to judge here than in a lot of 3D platformers, and sometimes a destination looks much closer (or more distant) than it actually is. Adjusting the camera usually helps, but that proves necessary more often than is ideal.

Another problem is the game's tendency to avoid giving the player sufficient information. You can often figure things out from context, particularly if you have played a lot of platformers over the years, but there are times when the way forward is unclear and you just have to try everything that occurs to you until something finally works. For instance, there are spiderwebs and other barriers in some stages that must be cleared using fire. However, there's no information in-game about where you can obtain that precious fire. Even once you have the ability to unleash your inner pyromaniac, the game doesn't specifically tell you how to do it, so you have to experiment. 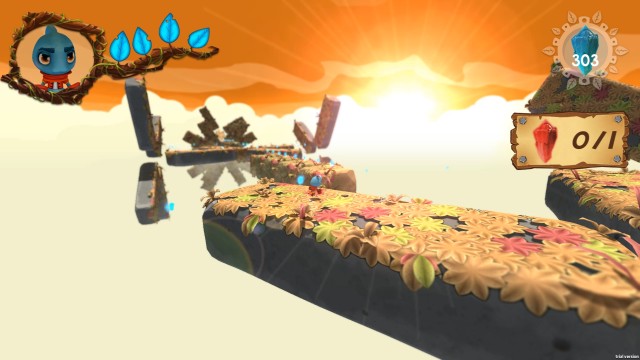 In addition to the issues noted above, the game suffers from extended load times when you enter and exit some areas. Simple stages don't take long to access (maybe 5 or 10 seconds), but some areas trigger a 15- or 20-second load time. Then, the camera might trick you into heading the wrong way at first, which could cause you to accidentally exit right after entering. Besides that, clipping issues are common. If you get stuck in a stage, you can at least pause and reload, but a better solution would have been to avoid such issues in the first place.

A good 3D platformer is a beautiful thing. At its best, the genre ignites the imagination and allows players to explore fantastic worlds with favorite characters. Ginger: Beyond the Crystal doesn't really do any of that, though. It starts out well but quickly wears away at a player's patience, due to a variety of minor technical issues that build on one another over time. There are some genuinely neat ideas at work here, but they're buried within an overall package that practically begs to be avoided.
2/5

If you enjoyed this Ginger: Beyond the Crystal review, you're encouraged to discuss it with the author and with other members of the site's community. If you don't already have an HonestGamers account, you can sign up for one in a snap. Thank you for reading!

© 1998-2020 HonestGamers
None of the material contained within this site may be reproduced in any conceivable fashion without permission from the author(s) of said material. This site is not sponsored or endorsed by Nintendo, Sega, Sony, Microsoft, or any other such party. Ginger: Beyond the Crystal is a registered trademark of its copyright holder. This site makes no claim to Ginger: Beyond the Crystal, its characters, screenshots, artwork, music, or any intellectual property contained within. Opinions expressed on this site do not necessarily represent the opinion of site staff or sponsors. Staff and freelance reviews are typically written based on time spent with a retail review copy or review key for the game that is provided by its publisher.