I was free and clear, with relatively few bruises to show for the half-dozen years I spent playing Wii games. The high-definition Wii U has been on the market for over 12 months now, and the PlayStation 4 and Xbox One are already last years news. I didnt have any pressing reason to return to the hundreds of readily available titles from Nintendos previous console generation, but I did anyway. There are gems there that Ive not yet experienced, Im almost certain, and Im determined to discover a few more of them before I put the little white box to bed. I just chose an awful place to start my search, and that awful place was Heathcliff: The Fast and the Furriest.

Heathcliff and I go way back. When I was a young lad, I used to watch the cartoon series on Nickelodeon whenever I visited my grandmas house on weekdays (my parents were quite content without a television signal), and I even bought some of the books from the school book club. They were very simple and innocent, but I liked the artwork and the characters. So do a lot of other folks, even now. The cartoon apparently still runs in newspapers (now drawn by George Gatelys nephew) and theres even occasional talk of a movie. I like the sound of that, but only if it turns out better than this botched Wii affair.

Perhaps the best thing about Heathcliff: The Fast and the Furriest is the title, a more clever play on The Fast & The Furious than the game deserves. Certainly, the story itself is nothing to write home about. The gist, as quickly told through a few panels arranged to resemble a comic, is that Heathcliff must race to save his feline lady friend Sonja--and presumably, the rest of the world--from an invading group of evil alien cats. Thats as good an excuse as any for Heathcliff and acquaintances to drive really quickly around a variety of cartoony tracks, but it also cuts one recurring character out of the action from the get-go and thats not good when there are so few of them to start with. A limited roster is the least of the games problems, though. 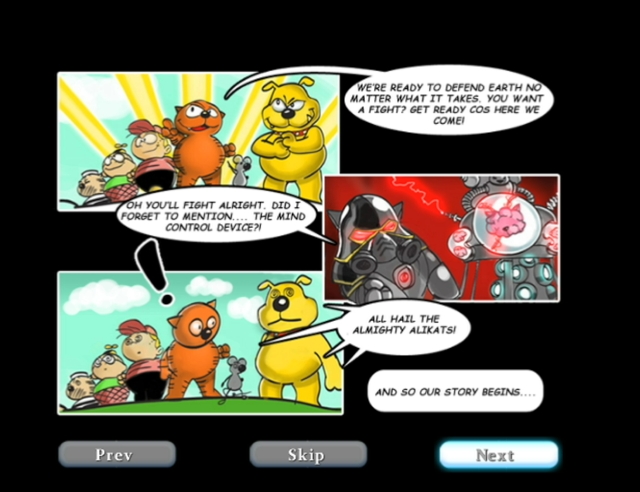 The bulk of the experience is divided between the Story and Race modes, with assorted menus besides in case you want to keep track of your best time on some tracks or whatever. You can point the Wii Remote at the screen to navigate the various options, but sometimes pressing the A button confirms a choice and sometimes youre expected to press the 2 button. The developers didnt seem to know if they want you to use the pointer device to get around, or the d-pad and number buttons. They settled for a mix of the two, without much rhyme or reason.

Menus are interrupted, as you might fear, by rather lengthy load screens. They pop up before you ever begin playing, then again between most menus and races. Theres nothing as bad here as the worst PlayStation games or whatever, but you do have to wait longer than feels quite fair. The developers at EC-I dont appear to have optimized much of anything for the Wii hardware, which is certainly capable of handling games of this sort without forcing so much downtime.

When you actually begin racing, youll find that the environments, though relatively sparse, are otherwise visually appealing. Vibrant colors are on display all around, with a blurry backdrop thrown in for good measure, and its all quite effective when admired from afar aside from the fact that the various venues are so similar (at least, the locales I was ever able to see bore a strong resemblance to one another). Look at screenshots of the game and it looks like it must be pretty good, but theres a difference between glancing at a still shot and trying to move a kart around the tracks. That difference is called play control.

Vehicle handling in The Fast and the Furriest is designated to the motion-sensing portion of the Wii Remote. You tilt the controller left or right to steer in the respective direction, while using the numbered buttons to accelerate and brake. The A button activates any power-ups you find littered around the track, Mario Kart-style. If you have a Wii Wheel, you can snap your Wii Remote into that shell and hold it like a racing wheel, which should delight youngsters or those looking to somewhat replicate an arcade experience. The only problem--and its a doozy--is that the karts control in such an over-sensitive manner that theres basically no salvaging the experience. 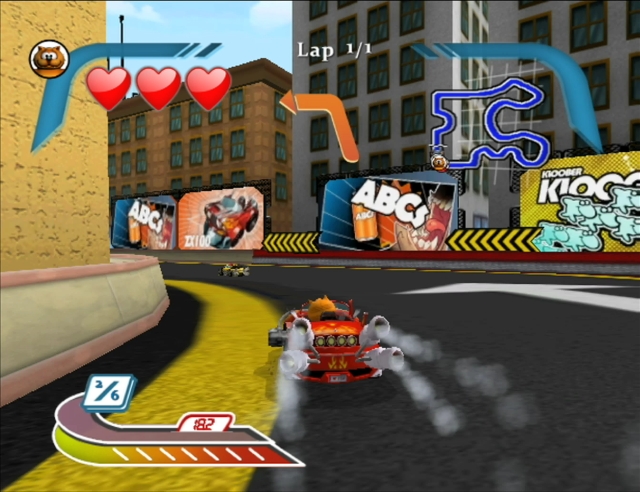 When I began playing, I selected the default difficulty setting, which is Easy. If you want, you can skip to Normal, and theres a higher setting that is unlockable. I figured the default setting would be a bit of a cakewalk but would ease me into things nicely. I was, of course, quite wrong. Immediately off the line, the other racers kept close to my tail, and then they started passing me on each corner. If I banged lightly against a wall, someone would pass. If I didnt corner beautifully, someone would pass. In almost no time at all, I would be left in the dust, and theres just not much chance of overtaking the competition, even if youre not driving like a crazy loon, even if youre hitting the speed-boosting zippers and even if youre using the items to their best advantage. Make one wrong move as you ease around a corner and youll likely be stuck weaving back and forth, trying not to overcorrect. Then youll perhaps ram headlong into another wall and begin the cycle anew.

I genuinely have no idea how anyone would ever get good at this game. Ive played touchy racers before and Ive been able to adapt to the controls without much difficulty. I admit to not always being the most skillful of virtual drivers, but I usually do well enough to clear tracks and make progress quickly. In The Fast and the Furriest, even on the very easiest setting, I couldnt place anything better than 6th, which is the worst possible position. I would feel humbled by the whole experience if the controls werent so ridiculously bad.

When I saw that someone had made a game based on the beloved Heathcliff comic, I was excited. I knew better than to expect a masterpiece, but I figured the Heathcliff: The Fast and the Furriest would still be good for some cheap thrills. $6.00 and a few days later, I became the owner of one of the worst racing titles available on the platform. Theres not enough unique content, load times are excessive, tracks are dull, menu navigation is tedious and the controls are so touchy that driving is a chore rather than a delight. This one needed refinement it never got, and now what it needs more than anything is to be put out to pasture. Even if you like the license, avoid this one.
1/5

If you enjoyed this Heathcliff: The Fast and the Furriest review, you're encouraged to discuss it with the author and with other members of the site's community. If you don't already have an HonestGamers account, you can sign up for one in a snap. Thank you for reading!

© 1998-2020 HonestGamers
None of the material contained within this site may be reproduced in any conceivable fashion without permission from the author(s) of said material. This site is not sponsored or endorsed by Nintendo, Sega, Sony, Microsoft, or any other such party. Heathcliff: The Fast and the Furriest is a registered trademark of its copyright holder. This site makes no claim to Heathcliff: The Fast and the Furriest, its characters, screenshots, artwork, music, or any intellectual property contained within. Opinions expressed on this site do not necessarily represent the opinion of site staff or sponsors. Staff and freelance reviews are typically written based on time spent with a retail review copy or review key for the game that is provided by its publisher.