So impressive is Super Meat Boy's legacy that any game which is even remotely similar is right away deemed to be an SMB-like. And of course, people are inherently lazy and saying SMB-like is a lot easier than saying hardcore precision platformer. Rage Among The Stars is one of these games, but we won't delude ourselves into believing it is on the level of Super Meat Boy. Hell, it's not even on the level of most of that games most generic imitators.

No, but Rage is definitely... an entry in the genre. And that's something, since games of this ilk don't seem to come along very often. And so this game, while being wholly unspectacular and problematic in many ways, may have disproportionate value to you just because it exists to scratch that itch. Just know that the scratching mightn't be as cathartic as you hoped; the scabs even unsightlier.

Precision platformers demand from the player, above all else, well, precision. And so it's natural that in turn, players demand from these games the same. There's nothing more infuriating than a very difficult game whose controls are not up to snuff. Rage gives us a well mannered double jump, which feels floaty, but predictable. For the first few levels, you will feel you have the matter well in hand, and when you die, you'll curse yourself. 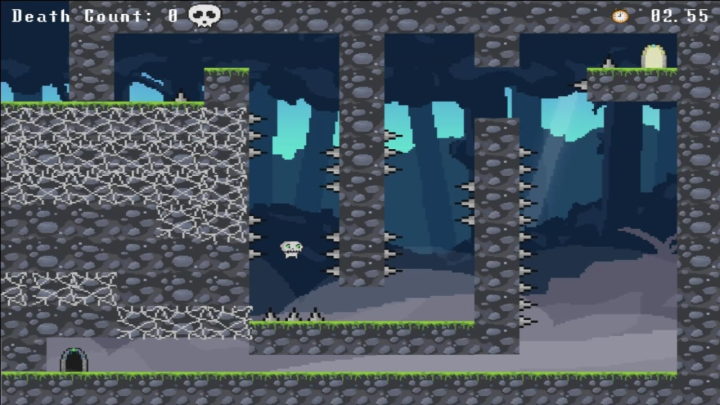 That doesn't take long to change. Soon you'll be cursing the game instead. Rage loves spikes the way SMB loves blades. Unfortunately, the game has a problem with vertical spikes in particular. I never had any issues traipsing through a bed of horizontally-laid spikes. But ones along a wall? That's another story. And in keeping with the wall theme (problems love to compound, don't they!), wall jumping isn't as precise as it could be. So when these two malformed ingredients are combined within one level... there's one trip to hell early on that I have tried to block out, which requires that you wall jump in between groupings of spikes while steadily ascending. Suffice it to say your patience will be tested.

But I mean, that's the name of the game, isn't it? We knew what we were getting into! In an attempt to tone things done somewhat, there are two difficulty levels on offer. You can play the game, ostensibly the way it was meant to be played. Or you can switch on "easy mode" (ha) which emasculates our character by putting a pink flower in the avatar's nonexistent hair (he appears to be an alien skull sitting atop a tiny, doughy body). He's not cute, or charismatic, he's just our onscreen marker of countless deaths. Do your best to drag him from level-to-level, jumping and dodging and cursing all the way. And spikes aside, a few levels will feature very sloppily implemented moving platforms, which are slight and slippery and don't want to accept your landings. One level requires you to ascend a narrow chamber full of these platforms and my frustration level was extreme. 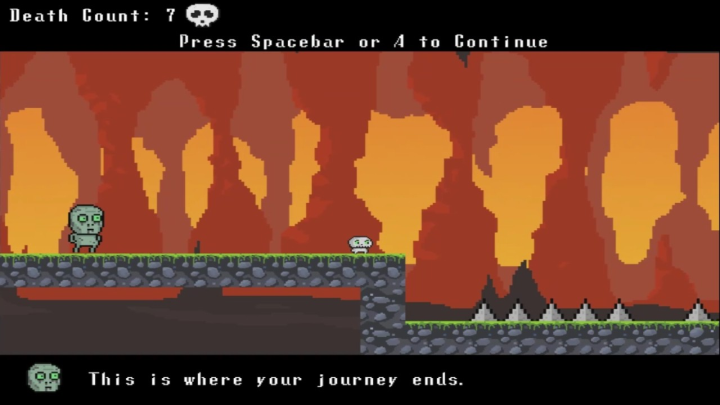 And yet, perhaps because I'm one of genre's champions who requires that above-mentioned itch to be scratched from time to time, I stuck with this imperfect entrant and fought to its end; most people would will not appreciate the game's obnoxious difficulty. And I get that's literally the name of the game. But I'm fairly certain the developers wanted our rage to be arrived at fairly and their game doesn't consistently do that. There are some sadistic bits that maim and kill fair and square, which do live up to the spirit of the game. There are areas where you must advance in almost complete darkness. There are areas with disappearing platforms. There are areas featuring what has become somewhat of a staple in this type of game: a fall down a chasm whose sides are alive with danger and demand from you some measure of finger gymnastics to navigate your avatar safely to the bottom.

Yes, the usual tropes and traps are here, and are a welcome sight. And when the levels cooperate with our hero's flawed skill set, you are in for a couple hours of hardcore fun, if you have the patience. Just be prepared for those hours to be interspersed with sections which will kill you with impunity in manners which feel most clumsy and unfair. My advice is simple. If you love Super Meat Boy and its ilk, pick up Rage Among The Stars on sale and play it on easy. Not because you suck, but because doing so helps mitigate the game's control problems. If you're not an SMB-style game worshipper... Well, why are you still here?
2/5

If you enjoyed this Rage Among The Stars review, you're encouraged to discuss it with the author and with other members of the site's community. If you don't already have an HonestGamers account, you can sign up for one in a snap. Thank you for reading!

© 1998-2020 HonestGamers
None of the material contained within this site may be reproduced in any conceivable fashion without permission from the author(s) of said material. This site is not sponsored or endorsed by Nintendo, Sega, Sony, Microsoft, or any other such party. Rage Among The Stars is a registered trademark of its copyright holder. This site makes no claim to Rage Among The Stars, its characters, screenshots, artwork, music, or any intellectual property contained within. Opinions expressed on this site do not necessarily represent the opinion of site staff or sponsors. Staff and freelance reviews are typically written based on time spent with a retail review copy or review key for the game that is provided by its publisher.