Ten years ago, an independent project titled Crimson Room invaded online message boards and Flash sites. The downloadable point-and-click adventure dropped players into a colorful chamber, with little exposition and a single goal: escape the room. The design hearkened back to a simpler era, when adventure games focused on trial-and-error gameplay and obtuse puzzles. Now, ten years after Toshimitsu Takagi introduced his original vision, a sequel has arrived to once again lock players within those four familiar red walls.

If you haven't played the original Crimson Room, finding yourself in such a position might prove confusing at first. A blue door conspicuously marks the only exit, and finding a way to open it is your obvious next step. However, the required process isn't similarly obvious. As I played, I often found myself clicking and trying to utilize props that wouldn't come into play until much later. Over the course of the game, the room's layout also changes, and tools that at one time served no purpose suddenly prove valuable in unexpected ways. 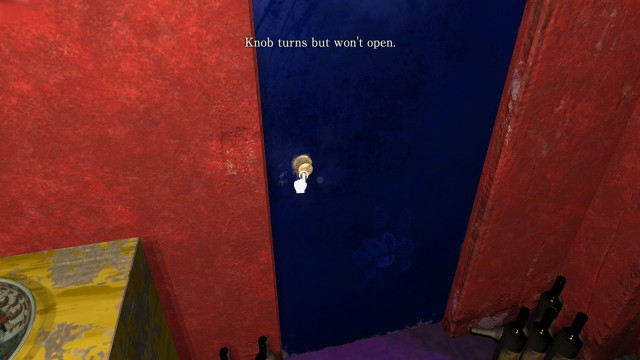 As it was in the original Crimson Room, the mystery is experienced from a first-person perspective. You can pick up items or combine them, and those two actions make up the bulk of your role in solving the puzzle and making your escape. New this time around is the ability to walk around freely, and to crouch so that you can peek underneath objects or draw closer to items that might be located closer to the ground. The entire available area is about the size of a crewman's bunk on a ship, so there isn't much space to navigate. Still, the added mobility proves helpful when it allows you to check furniture's perimeter to find a note that's been carefully tucked away, or to discover an all-important pocket knife.

To interact with objects, all you must do is pick them up and click to indicate where you would like to use them. You can wield only one item at once, but any discarded items will be available in a communal area. This prevents you from dropping something useful somewhere and having to search to find it again. When the solution to a puzzle at hand isnt immediately obvious, sometimes the best approach is to use every item at every interactive point, until a solution finally presents itself (a generally reliable technique that I picked up in my early days of playing classic Kings Quest and Monkey Island titles). 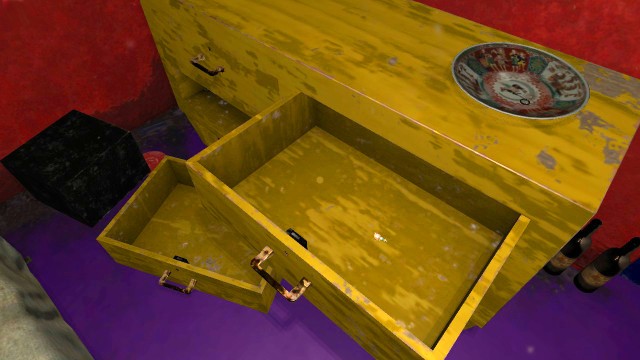 If you haven't played the original Flash game, some of the puzzles and possible solutions in Crimson Room: Decade will likely feel quite obtuse. Without an affinity for abstract thinking, for instance, you might completely fail to see how opening and closing a set of curtains might make a difference in your current circumstances. Midway through my adventure, I took a break to play the original Crimson Room some more. That proved helpful, since many of the items featured in the update are similar to those that were featured in the initial installment. A reworked puzzle that was featured in the first game might be solved here in a completely different manner, however.

Crimson Room: Decade won't push most PC hardware to its limits. Developed in Unity, the title performs decently across numerous hardware configurations. Graphical settings and enhancement options are non-existent, save for some brightness adjustment and mouse tweaks. I played through the campaign while using only a modest gaming machine, and the frame rate remained constant in the low 20s or so. Enabling mouse smoothing features made looking around a more pleasant experience, but added a slight bit of input lag. 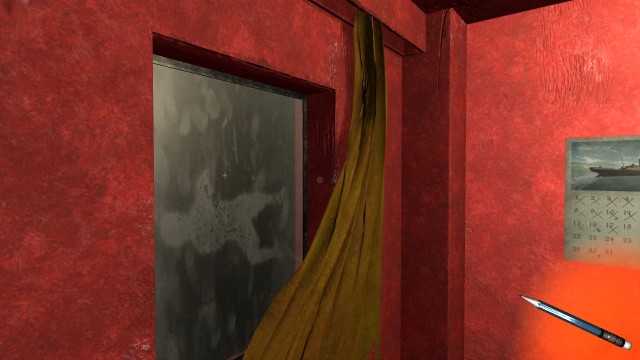 Theres a story to be unraveled in Crimson Room: Decade, related to the identity of the person trapped in that red room, and the reason for that confinement. An opening movie sets the tone, and the notes hidden in nooks and crannies around the chamber provide additional insight into the setting. The game can easily be experienced without paying any attention to the story, but the extra details provide a new point of interest for those who like such things.

Ten years is an incredibly long time in the gaming industry. Some would say it's too great a gap between releases within a franchise. Perhaps because of that delay, though, Crimson Room: Decade is able to stick closely to the formula established by its predecessor and still feel fairly fresh and enjoyable. It's just a shame that the attempts to modernize the experience with a new engine and improved visuals didn't quite accomplish that goal.
3/5

If you enjoyed this Crimson Room: Decade review, you're encouraged to discuss it with the author and with other members of the site's community. If you don't already have an HonestGamers account, you can sign up for one in a snap. Thank you for reading!

© 1998-2020 HonestGamers
None of the material contained within this site may be reproduced in any conceivable fashion without permission from the author(s) of said material. This site is not sponsored or endorsed by Nintendo, Sega, Sony, Microsoft, or any other such party. Crimson Room: Decade is a registered trademark of its copyright holder. This site makes no claim to Crimson Room: Decade, its characters, screenshots, artwork, music, or any intellectual property contained within. Opinions expressed on this site do not necessarily represent the opinion of site staff or sponsors. Staff and freelance reviews are typically written based on time spent with a retail review copy or review key for the game that is provided by its publisher.