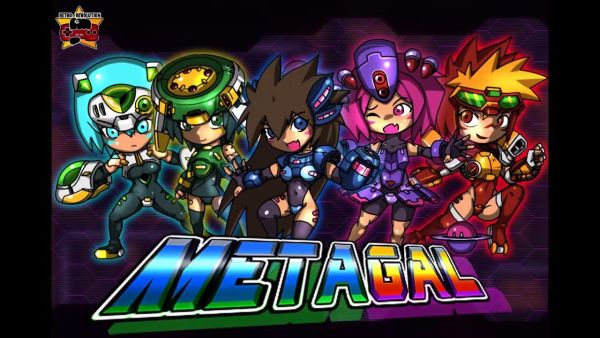 Let's start by addressing the elephant in the room: Metagal is a Mega Man clone. You can't discuss the former without bringing up the latter, because Metagal wears its inspiration on its sleeve. The game stars a cyborg named Meta on a mission to rescue her creator from the evil genius Creeper, who happens to have a fascination with skulls. Unfortunately, Meta can't just blow down Creeper's front door and charge into his compound with guns blazing. Four villainous cyborgs equipped with destructive weapons block her path. As luck would have it, though, Meta's creator imbued her with the ability to steal her opponents' weaponry after defeating them. Each new toy she earns also boasts a wonderful advantage over one of the remaining bosses, rendering her easier to defeat.

You might be inclined to dismiss Metagal as an inferior clone. The beginning of its campaign may confirm your suspicions, because the take-off is bumpy. Metagal's mechanics are loose and its animations are slick, but not ideally so. The game moves at such a quick, awkward speed that you'll spend the first stage or so careening into bullets and slamming into foes. The worst part is trying to get used to leaping and shooting simultaneously. If you don't have the rhythm down just right, you'll end up missing your target.

Acclimation requires practice. In time, your mind adapts to Metagal's odd physics and timing, allowing you to blast Creeper's robot army with ease. You learn to deal with pesky flying or plummeting enemies, and to scotch robots perched on out of reach platforms and plateaus with grace. With your skills honed, you out-maneuver them and dodge their projectiles, while returning a volley of your own and reducing them to charred metal. Eventually, you figure out how to survive onslaughts without barreling haphazardly into skirmishes, saving yourself some energy for future barrages. 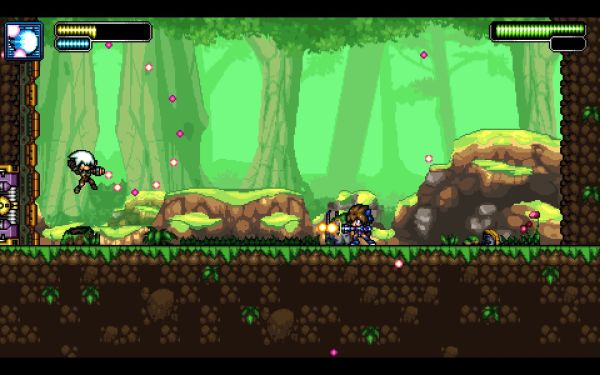 The price of recklessness is not pretty. You could charge into to the fray, unmindful of your opponents, and still come out on top. However, you would be missing a substantial portion of your health afterwards. If Metagal doesn't toss you a restorative power-up afterward, you could then find yourself approaching a tricky sequence with next to no hit points. Trust me, it's no fun taking on a segment full of beehives with only a teeny chunk of your life remaining. Metagal may be a simple platformer, but it's no pushover.

If you need any further proof that Metagal has a mean streak, look to its devious assortment of obstacle courses. One stage pits you against spinning wheels from which multiple flaming tongues extend. You have to take cautious steps to survive these scenes, especially when nearby adversaries bombard you. Some of the most dreaded sections, though, involve cannons that warm up and fire massive beams after a few seconds. Once they unleash their blast, there's no stopping them. Scramble past them quickly or it's lights out.

These sequences are where Metagal comes to life. It's addictive and exhilarating, negotiating a series of tight platforms that occasionally give out on you and send you plunging into a pit. Or pushing your way through an underwater sector filled with spikes, where pressing the jump button too hard leads to a painful death. Or riding airborne explosives in an effort to cross a canyon. Precision is paramount during this trial. Should you fail to leap to the next platform in time or give a floating bomb's explosion enough space, the burst will fling you into the great unknown. 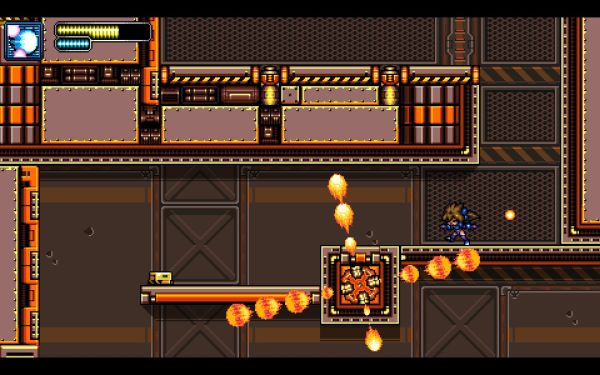 Your reward for survival is a traditional boss encounter that befits the game's old school theme. Each boss, referred to as a "gal," utilizes a discernible pattern. One gal rides a mini-tank that burns rubber at you, while she also tosses bouncing bombs to keep you on your toes. Another absorbs your shots or deflects them with her shield, but occasionally drops her defense when executing certain offensive moves. The fight that had me pulling my hair out involved pulsating explosions that linger on the screen and draw you toward them. That boss also possesses a muddling body-swapping technique that causes you to lumber into the aforementioned gravity blasts.

Do you know what's not addictive and exhilarating about Metagal's obstacles, though? That would be the dash function. Meta dashes when you double-press left or right. When working as intended, this move allows you to cover ground more quickly and execute long jumps. There are numerous segments where you must walk slowly, where it's important that you advance a few feet, stop, take a few more steps, stop and so on. Occasionally, those repetitive movements trigger Meta's sprint, causing her to inadvertently crash into a trap or a creature.

Metagal softens the blow by providing you with "rebirths," gear-shaped items that lie in various positions throughout the campaign. They allow you to resume play at the beginning of a sequence, rather than at the previous checkpoint. Besides the rebirths you find, there also are the ones that foes drop from time to time, which makes it easy to build up a healthy supply of them. Bear in mind that you have infinite lives, as well. Even if you muck up a dozen times--and if you're like me, you will--you have immortality to fall back on. It's a relief to know you can reach a boss and not have to take a stage from the top if you don't manage to defeat her within a couple of attempts. 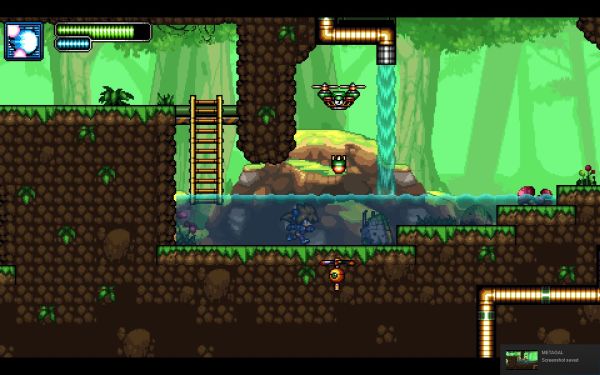 It's fair to say that Metagal is a blast, albeit an imperfect one. There are a few minor factors that dull its luster a touch. For one thing, cutscenes sport clumsily written chatter, highlighted by an inconsistent use of apostrophes. This doesn't hamper Metagal's entertainment value, but the overall package is less polished when "can't" is sometimes spelled "cant," for instance. Also, there were a few spots where the stage design is outright cheap because it doesn't allow you to escape without taking damage. During one scene, you have to plummet onto a baddy who's just below you. You don't have much time to react before a killing laser cuts loose, so your only recourse is to get cozy and hope you have enough hit points.

Some players might be disappointed to find that there are only four "robot masters" in Metagal, but I thought its campaign's length was perfect. If it provided any more stages, it would have run the risk of overstaying its welcome. Imitation is the sincerest form of flattery, but such love letters are best when they're short and sweet. Metagal concludes with a fitting final boss encounter after only eight stages, and is better for it. It offers just enough thrills to remind you why you love Mega Man so much. I think that's enough.
4/5

If you enjoyed this Metagal review, you're encouraged to discuss it with the author and with other members of the site's community. If you don't already have an HonestGamers account, you can sign up for one in a snap. Thank you for reading!

© 1998-2020 HonestGamers
None of the material contained within this site may be reproduced in any conceivable fashion without permission from the author(s) of said material. This site is not sponsored or endorsed by Nintendo, Sega, Sony, Microsoft, or any other such party. Metagal is a registered trademark of its copyright holder. This site makes no claim to Metagal, its characters, screenshots, artwork, music, or any intellectual property contained within. Opinions expressed on this site do not necessarily represent the opinion of site staff or sponsors. Staff and freelance reviews are typically written based on time spent with a retail review copy or review key for the game that is provided by its publisher.