Whenever I find myself bogged down with my main gaming projects, I like to revisit something from yesteryear because those old games can usually be played through in a handful of days, at most. I can burn through it, see if my past experiences match up with the present and crank out a quick and decisive review.

With Super Castlevania IV, things are a bit more complicated, though. It might not have taken me a long time to play through it again, but determining how I feel about it wasn't an easy task. In some ways, it's a great game. In others, it's decent, but pales in comparison to the series' third outing on the NES. I really liked it back in the day and I still like it -- it's just that those positive vibes aren't so unanimous.

To start with the good stuff, even if this was a very early SNES game, it still looks and sounds a lot better than any of the NES installments. I remember when I first saw a SNES in action, I was playing A Link to the Past with a friend and was amazed at how the music was so much more full and vibrant than what I was used to. That is also on display here, along with some nice touches. When fighting Dracula, as you get closer to defeating the pesky vampire, his theme will fade out to be replaced with Simon Belmont's -- something that will pump you up while playing even if the reality of the situation is that he's one hit away from killing you and you haven't figured out how to consistently dodge his attacks.

Graphically, enemies are drawn with more details, there is a larger palette of available colors and so on. This leads to a nice amount of level variety. After going through forests, caves and towers to reach Dracula's castle, you'll find spike-infested dungeons, treasuries coated with gold and other sights, such as the evil count's ever-so-familiar clock tower. Regardless of how undead its inhabitants are, Dracula's realm never felt so alive, with ghostly couples dancing in ballrooms and massive golems crumbling to nothing under your onslaught. 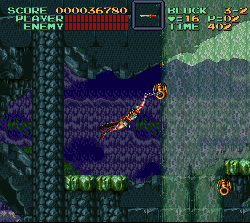 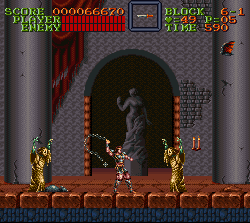 No member of the Belmont family has ever been as versatile as Simon is in this game, as well. Now, you can control your jumps in mid-air, which is a nice touch. Saves on the loss of lives due to one solitary slip-up while trying to handle gaps in the floor while medusa heads are flying in your general direction. Even more noticeable are the whip controls. In the previous Castlevania games, your hero had a handful of options. He could whip in front of him. He could turn around and whip to that side. Or, he could jump in the air and whip in front of him, but a bit higher up this time. Obviously, this led to you having to overcome any number of blind spots, often hoarding the axe as your special weapon of choice since that one is thrown at an arc to give you some semblance of attack versatility.

Not here, friend. Not here. Simon's whip is a do-anything force of nature. You can whip to the front and the back. You can whip directly above your head and at 45-degree angles to each side, while also using it to clutch onto certain rings in order to swing like it's Bionic Commando all over again.. You can make it limply dangle, flipping and flopping it to and fro in order to block enemy projectiles, as well as lightly damage nearby foes.

Before I lose track of what I'm writing about and this review goes off-topic and really X-rated, let me re-focus to say this is the aspect of the game that gives me those nagging "second thoughts" about how great Super Castlevania IV actually is. If we look back at Castlevania III and why it was so deliciously difficult, the first thing that must be mentioned is enemy placement. It seemed like nearly every level, even the early-game ones, had foes in tricky locations where it took a good bit of skill and timing to dispatch them without suffering damage in return. Auto-scrolling levels would become brutal as I'd find myself trying to scale a tower while having to deal with something or other poised to knock me off ledges to my death. Any stage where monsters would attack from above, such as the birds dropping those annoying-as-hell hunchbacked midgets had the potential to be the stuff nightmares are made of, as I'd have to wait for them to fall and hope I could whip them before they started hopping like frenetic, homicidal jackrabbits. 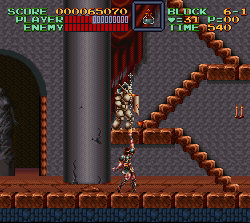 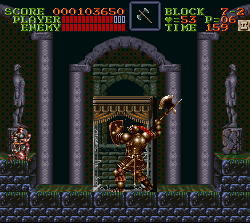 Super Castlevania IV utilizes that same approach to enemy placement and it all gets diminished by your new-found mobility. Remember how you'd feel really nervous climbing up staircases knowing that a heavily-armored foe was waiting, throwing massive boomerang axes with regularity? Now you can just perch below many of them, whip upward and watch them die in a location where it's physically impossible for them to even touch you. By whipping up and possibly at an angle, most of those flying enemies will find it difficult to get the drop on you. The game stays the same, you're just too versatile for a lot of it now.

And a bit over-powered, perhaps. For a good portion of the game, it seems like everything, including bosses, will go down quickly to either your whip or one of the better sub-weapons. While it's not commonly found, if you can pick up the boomerang/cross thing, bosses might as well not even show up. They'll appear on the screen, the fight will start and I only had to stand still and spam that weapon because I knew it'd die before my health was depleted. The first boss I found myself having to use anything resembling strategy to defeat was the giant gem-encrusted bat in the treasury level and that was solely because it was too high in the air for the cross to reach. I'd imagine if I had the axe for that fight, it'd have been as easy as the other bosses had been to that point.

Not to say this game is a pushover. Many of the levels are designed a bit diabolically, in particular the bloodI mean green slime-coated (thanks, censorship!) dungeon, which is loaded with instant-death spikes. Your whip might utterly wreck all the monsters you encounter, but those spikes and pits will take their fair share of lives from your tally. And by the time you get to the end, odds are you'll have forgotten all those easy parts because you'll be throwing your controller and screaming odd mash-ups of random profanities. After completing the requisite clock tower, you'll have a nice ascent up to Dracula's tower; that is if you replace "nice" with "insanely stressful", as you'll have to race a giant gear up the first portion of it with the penalty for getting caught being death. Outlast the gear and you'll find yourself jumping from one rapidly-ascending block to another while trying (often unsuccessfully) to avoid spiked ceilings and the instantaneous death they'll provide. 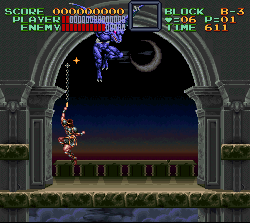 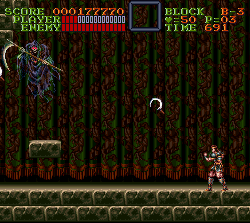 Make a Faustian bargain with Mephistopheles to get past that stage and you'll just have the final stretch to go. Which is a gauntlet of bosses that all are designed in a way that spamming the cross and hoping to be the last one standing will only lead to a humiliating death. Anyone who jumped on the Castlevania train around the time Symphony of the Night was released will be SHOCKED at just how much Slogra and Gaibon were neutered for that game. Here, you don't fight them both at once, you get each one separately -- and they'll still make you cry for mercy. Slogra, the skeletal bird-man-monster-whatever, has a giant spear, a quick (and damaging) stabbing attack and responds to any attempt at aggression on your part by jumping in the air, hoping to land right on your head. Break his spear and, no bother, he'll simply put his head down and charge you. Gaibon is a bit more straight-forward. He flies around and spews fire at you. The more he's hurt, the more attacks he'll deliver. After that, Death makes his required appearancewith a few new tricks, such as an attack that attempts to suck you into him for collision damage while, at the same time, destroying any projectiles you might be throwing at him because he looks like an easy target just hovering there on the ground. And, of course, Dracula. A grueling battle against a foe with a variety of different attacks and seemingly as durable as his three lackeys put together.

Yeah, if you beat Super Castlevania IV, you did beat a tough game, as that final stretch is absolutely brutal, requiring split-second timing, fast reflexes and the ability, gained through many deaths, to memorize level designs and boss attacks. It's so tough that it feels kind of jarring, as most of the ground you'll cover to get to that point ranges from "easy" to "tricky, but not Castlevania tough". It leads to this weird vibe where I'll play through a number of levels, generally being pretty relaxed and then, all of a sudden, realize I'm white-knuckling my controller and my heart rate has doubled because I know that one teeny-tiny wrong move is going to lead to an emphatic failure.

And so, how do I rate this game? By the end, it was giving me all that I wanted and more from a Castlevania game. Brutal level designs, sadistic bosses, the whole works. But getting to that point was mostly anti-climactic and, at times (and I hate to say this) almost boring. Being able to kill enemies in locations where they had no way to reach me made levels that would have been tough in another Castlevania a piece of cake to complete. When this game is good, it's great; it just isn't consistently good. The technology might be superior, but for my money, give me Castlevania III any day of the week.
3.5/5

If you enjoyed this Super Castlevania IV review, you're encouraged to discuss it with the author and with other members of the site's community. If you don't already have an HonestGamers account, you can sign up for one in a snap. Thank you for reading!

© 1998-2020 HonestGamers
None of the material contained within this site may be reproduced in any conceivable fashion without permission from the author(s) of said material. This site is not sponsored or endorsed by Nintendo, Sega, Sony, Microsoft, or any other such party. Super Castlevania IV is a registered trademark of its copyright holder. This site makes no claim to Super Castlevania IV, its characters, screenshots, artwork, music, or any intellectual property contained within. Opinions expressed on this site do not necessarily represent the opinion of site staff or sponsors. Staff and freelance reviews are typically written based on time spent with a retail review copy or review key for the game that is provided by its publisher.