For the longest time, it was evident that Metal Gear just wasnt for me. I tried, God knows I tried. I beat the PSX not-quite original twice but instead of learning to appreciate it more, I just found more things to be annoyed about. I had the second game on launch (because it came packed with the console, admittedly, but still) but forced myself through significantly less hours before deciding my time was better spent elsewhere. I was the minority on this, and that was fine. The series existed as this thing other people enjoyed and I didnt. And then Metal Gear 5 happened.

I think my love affair with MGS5 revolved entirely upon how ridiculously open it was, so all the stealth tactical espionage bollocks and overwritten political fanfic plotlines were safely ignored while I wandered around the world, lightly trolling friend and foe alike. Once, my travels took me beneath the scope of an entrenched sniper sitting pretty in an armoured crows nest. I think the game wanted me to have an exciting snipe-off, darting between points of cover to try and find the perfect angle to finish off my foe from afar. I didnt do that. I called down an air supply drop and parachuted a jeep right on his tower. When trying to sneak into an enemy base, I spent the time and effort needed to learn patrol routes and enemy numbers, like I was supposed to. I used this information to highlight a window of time an entrance would be unguarded. But I didnt use this to steal away inside; instead, I filled the entrance with a number of inflatable decoys, waited for the guards to return and triggered them. In seconds, they were surrounded with half a dozen Snake-shaped balloons and promptly lost their shit while I giggled behind a rock. Ive a million little stories like this and, even though I never completed the main story of the game, it seemed Hideo Kojima had finally won me over.

AND THEN he did the unthinkable and rescued Silent Hill from the heartbreaking cycle of destruction Konami had trapped it in. Forever farmed out to third party developers who collectively missed the entire point of the series, Kojima released a playable teaser of his new vision, and it was universally adored. What followed should have been a boom period for Konami, a comeback tour for the ages. They would have to go hard to mess things up. So Konami went hard. They went harder than anyone had gone before. They cancelled Silent Hills, then they fired Kojima, then they sent lawyers in to ban him from accepting any awards his games had won. Then they tried to prove that Metal Gear Solid could still continue without its iconic creator, who had helmed the series since 1987. What theyd done by this point is foster an unprecedented amount of consumer ill will; the post-Kojima MGS would have to be spectacular to overcome that, so Konami got hard to work. First, they googled what was popular in video games ten years ago and came up with crafting sims, open world survival and zombies. And then they made a game so insultingly bad, they didnt so much as kill their golden goose as they did coat it in concrete and fire it off into space. 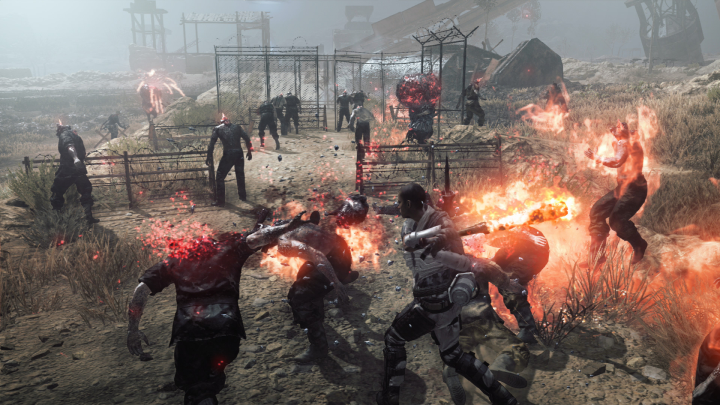 Metal Gear Survive isnt just a bad Metal Gear game; it manages to be bad all by itself. Spectacularly bad. It feels like a weird indie Steam game in that period where everyone was trying to copy 7 Days to Die, but awkwardly built on a AAA game engine designed for grander things. It even tries to distance itself early; rather than take place in the same universe as previous Metal Gears, a random Big Boss heavy finds a wormhole to an alternative dimension, and is sent through to pilfer resources, or whatever. Only, when he arrives, he finds it a dust-filled desert world filled with the reanimated corpses of soldiers sucked through the hole previously, who casually try to kill you. Your goal, therefore, is to survive and find a way home. How do you go about this? Blandly.

You have to collect resources to build a base, and then you collect more junk to make your base grander, or stronger, or stock it up with human survivors and, to do this, you have to explore the bland world before you. Here, you can collect wood or nails or scrap metal until you reach your weight limit, then you limp back to base, use your junk as best you can, and venture out again to repeat endlessly. Well, not endlessly, because everything you do counts against you. You get hungry or you get thirsty, or your stamina gets low, so you have to constantly keep on top of all these things. To help you with this, Survive grafts a monotonous Alexia to nag you constantly. Not drank anything in a while? Pay attention to your fluid intake, it says. Gone more than a dozen steps? Pay attention to your stamina. It tells you when youre hungry to prompt you into hunting food, but find a goat and punch it to death, and you cant eat it on the spot like you could in 2004s Snake Eater. No, you drag that carcass back to your base, with your low stamina and grumbling tummy, or you starve to death. Also, theres zombies.

The zombies themselves arent that much of a threat aside from when they do that whole horde thing theyre best known for. In another world, this would be a pretty cool sandbox experiment of sorts; imagine if you had all the insane possibilities of MGS5 and had the chance to field test them not on intelligent enemy soldiers, but mass numbers of shambling mutants? Smacking zombies in the face with a detachable rocket fist, or dividing them with inflatable decoys. Thats not how Survive plays out and you can limp through the majority of the game with this one genius tactical play:

1// Find a choke point
2// Construct a fence.
3// Stand behind the fence and poke the encroaching zombie horde to death with a stick. 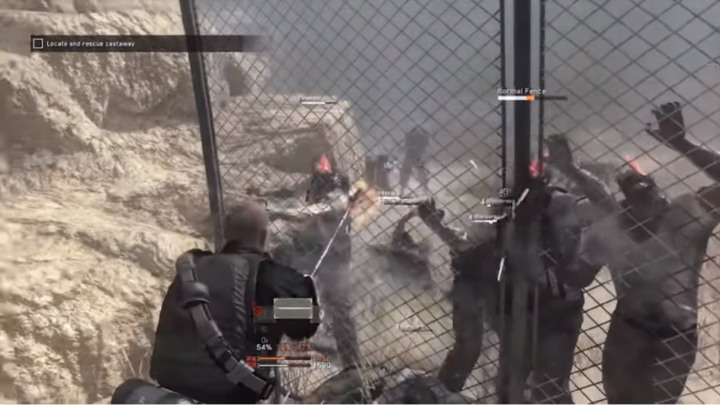 And then you explore about, pick up junk, return to base and then do the same thing over and over again. Even when you discover something of worth, getting there is such a chore it feels like an uneven trade-off, and all progress can suddenly become undone because the random junk generator has failed to drop a mountain dew or something in your path for the last half hour and youre too thirsty to continue. Metal Gear Survive is perhaps the worst thing a video game could be - its boring. Playing feels like a chore, an unrewarding trudge towards nothing of value. How can you be worse than that? Konami found a way:

The games riddled with microtransactions, for one. The damning report that you had to buy extra save slots with real world money isnt exactly true, but it does hide features behind a paywall that should be readily available on whats a full retail release. Heres another; even in single player mode, the game demands youre always online. Survive will not work unless this is adhered to. This means, someday, Konami will shut down the servers and this game will cease to work at all. As I write this, Steam tells me theres only 36 people playing this while MGS5 is hosting over 2,000. I suspect the day when this game gets euthanized might be sooner rather than later. I suspect there wont be many tears.

If you enjoyed this Metal Gear Survive review, you're encouraged to discuss it with the author and with other members of the site's community. If you don't already have an HonestGamers account, you can sign up for one in a snap. Thank you for reading!

© 1998-2021 HonestGamers
None of the material contained within this site may be reproduced in any conceivable fashion without permission from the author(s) of said material. This site is not sponsored or endorsed by Nintendo, Sega, Sony, Microsoft, or any other such party. Metal Gear Survive is a registered trademark of its copyright holder. This site makes no claim to Metal Gear Survive, its characters, screenshots, artwork, music, or any intellectual property contained within. Opinions expressed on this site do not necessarily represent the opinion of site staff or sponsors. Staff and freelance reviews are typically written based on time spent with a retail review copy or review key for the game that is provided by its publisher.