Of the many games which have come down the pike trying to shamelessly approximate the feeling of playing the revered classic Super Metroid, Super Skelemania, a tiny game from a tiny studio, may have come the closest. The highly touted Axiom Verge probably comes just as close, and did so with its own idiosyncrasies and brand of aplomb, and that game probably looks and plays more the part. But for the precise Super Metroid atmospheric recipe: oppressive alienation and foreboding, haunted and otherworldly hallways, and ability to excite when new areas fraught with unique dangers are discovered  this is the jackpot. (Albeit, a very small jackpot.) This is Super Metroid in a single sitting.

The developers have made no bones about the fact Super Skelemania is small in scope, actually billing it as a single-sitting metroidvania. You shouldn't have any difficulty beating the game in under two hours. And once you already know what you're doing: well, there are 15-minute speed runs on YouTube already. This is not to say that the game is devoid of challenge  youll have plenty of moments where youre not sure where to go next, plenty of theories about progression proven wrong, false starts, and dead ends. 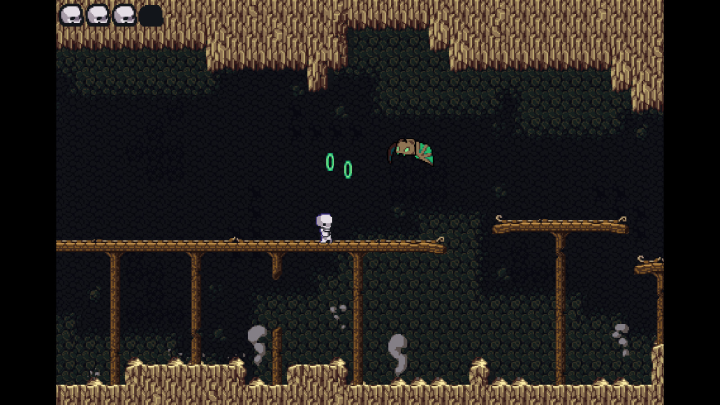 You begin your adventure on a barren alien plain which is only missing Samuss iconic yellow ship; from there, you are forced to move leftward and downward into the dark belly of a malevolent planet occupied by giant skull spiders, ubiquitous spike traps and geysers, and a murderous frog king. Youll need to scour this world, leaping up ladders while triceratops-like creatures patrol platforms, in search of curious powers and five gongs to sound to bring about the almighty evil, who you must slay to have a chance at returning home.

As with any other metroidvania, your hero starts out with very basic skills. Unlike any other metroidvania, your hero is a skeleton, and the developers werent going to miss an opportunity to have him use his unique skeletal physique as a weapon. His neck elongates like Mr. Fantastics, and he bashes enemies with his skull. Appearances aside, the actual function feels a lot like wielding the Vampire Killer whip in any one of the Belmont familys early adventures.

Along the way, our hero will accrue some rote upgrades: added health, and the power to dash through enemies and solid rock alike. But other upgrades are rather special: the ability to Bowl your own skull down narrow passages (the games answer to Samuss Morph Ball), and the Dive ability, which covers dangerous ground quickly and gracefully. Super Skelemania does a very good job at requiring that you use the power you just learned almost immediately, and I'm not just talking about getting out of the item room wherein the power was found. Furthermore, the game encourages chaining abilities (dash, backflip, dive!) to move about the world very quickly  speed runners will love this. 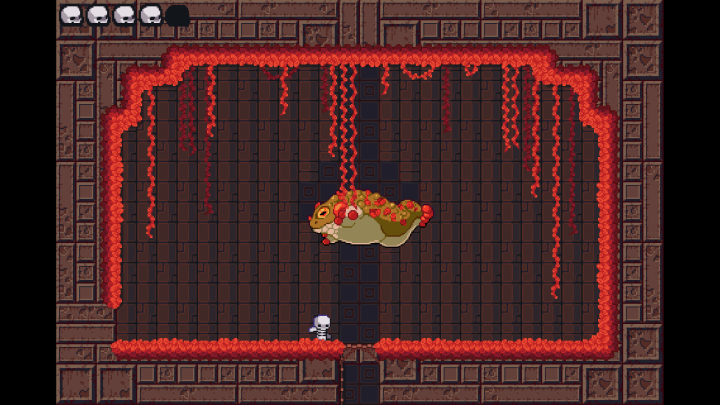 There are five interconnected underground areas, each boasting a very distinct alien look and excellent theme music. It would have been relatively easy for a game this short to get away with employing homogenous corridors and a stripped down score, but the developers didnt take the easy route. While Super Skelemania may not be anywhere as clever or involved as the game which likely inspired it, it does its best, on its own very small scale, to keep pace in terms of sheer atmosphere. The sights bring weird horrors; the sounds speak of melancholy and fear. And any metroidvania worth its salt should furnish moments where you think: Hey, what area is this now? This looks dodgy and yet, Im at an impasse in the previous area  I'd better soldier on and hope theres a save point around the corner This game does that.

Aside from Super Skelemanias lack of size  which was quite intentional and is a strength at least as much as it is a weakness  my only gripe with the game is the map. It isnt the prettiest, or clearest. I suppose you could also argue that for what it is, the game is a bit pricey, as well. But I think its important that such a game exists: it succeeds in being a scaled down entry for a genre that customarily presents much larger stories, but theres no compromised vision here. In a world of metroidvania novels, Super Skelemania is a short story, told just right. And like a great short story, it will stay with you, and invite you to return (for speed runs, naturally).
4/5

If you enjoyed this Super Skelemania review, you're encouraged to discuss it with the author and with other members of the site's community. If you don't already have an HonestGamers account, you can sign up for one in a snap. Thank you for reading!

© 1998-2020 HonestGamers
None of the material contained within this site may be reproduced in any conceivable fashion without permission from the author(s) of said material. This site is not sponsored or endorsed by Nintendo, Sega, Sony, Microsoft, or any other such party. Super Skelemania is a registered trademark of its copyright holder. This site makes no claim to Super Skelemania, its characters, screenshots, artwork, music, or any intellectual property contained within. Opinions expressed on this site do not necessarily represent the opinion of site staff or sponsors. Staff and freelance reviews are typically written based on time spent with a retail review copy or review key for the game that is provided by its publisher.