Ha, get it? Myth-take? Haha! Oh, it's not funny? Well, that's intentional, you see. It's just my way of preparing you for your journey through Immortals Fenyx Rising. Because the entire game is narrated by Prometheus with color commentary by Zeus, and said color commentary tends to be really, really bad humor. So you see, my horrible pun was clever after all. If you can survive it, you can survive this game.

Actually, a lot has been made of this narrative structure, with many considering these two commentators rather grating. And yes, it isn't funny most of the time, and Zeus' humor is basically only one note about what a jerk he is. It also doesn't help that the best gag is in the tutorial-ish intro, leaving everything else hollow. But still, it's in the background, and I was able to tune it out. Maybe you'll find it funny (humor is subjective after all), but even if not I hope you can ignore it. Because avoiding a fun adventure for such a minor reason would be a travesty of titan-ic proportions (ok, I'll stop).

As stated, your adventure is narrated by Promotheus, whom Zeus is begging for help after Typhon has been set free and is wrecking havoc. But Promotheus instead narrates a story happening in parallel: the story of Fenyx, a simple shield bearer who ends up the only survivor after getting shipwrecked on the Island of the Gods and now has to deal with Typhon's wrath. She (or he) must go it alone after realizing everyone else has been turned to stone, but after meeting Hermes realizes she can get help by freeing four of the gods from the curses Typhon put on them. Zeus doesn't think you'll win, but you'll show him, right? Yeah, the narrative structure is weird, and the game's writing is clearly irreverent and whimsical, but it actually does pay off a bit at the end. So even if it is grating, pay at least a little attention.

But you don't need to give it much thought, because really, what's important is the adventure, the gameplay. You have undoubtedly heard of this as an Ubisoft Breath of the Wild due to its colorful and cartoonish look, the shrine-like underworld, and even some blatant copycat elements such as a Magnesis power. Sure, some of those are so obviously clone-esque that you have to role your eyes at least a little bit, but thankfully at the heart of the matter, Ubisoft captured the most important aspect from its more famous inspiration.

Yes, there are a ton of open world games out there, but so many of them are so routine in their setup. Assassin's Creed has you climb a tower and then fills your map with little tasks, no exploration required. Skyrim has plenty of dungeons you could discover and explore, but you're often better off going to the towns and searching for the quests that involve them instead. But here, like in Zelda, you are just tossed out into the world with barely a goal and told to go explore. Yes, there is a questline, but it's refreshingly non-linear (you can free the four gods in any order, and even complete some of those individual tasks out of order) and without the sense of urgency you often get in other open world games. And yes, you CAN climb a hill and manually mark a bunch of points on your map like Assassin's Creed, but trust me, it's better if you don't. 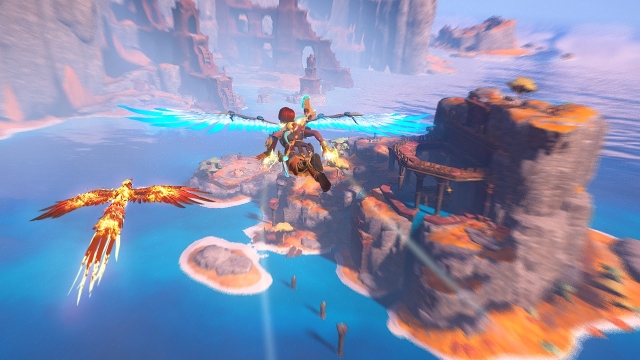 Because this world is DENSE. Head off in any direction and you will soon find four or five distractions. And you just can't pass them up. While Zelda had shrines, koroks, and monster camps as the main distractions, there's a lot of different things to find here, all with different rewards. You have shrines (often providing lightning to upgrade stamina) and monster camps (often guarding chests with currency to upgrade weapons/armor), yes. You also have mini-puzzles in the overworld that hide more chests, or more major puzzles (firing a bow like Odysseus, creating a constellation, memorizing a tune on a harp, or running a race) that reward you with coins from hell to upgrade your skills. Or you have ambrosia hidden on peaks or other hard to find areas that upgrade your health. Or you have a few optional boss encounters. There's so much to do here that you always feel like you are just on the verge on another significant milestone in your upgrades, and always want to push forward to see what's beyond the next hill.

It helps that many of these puzzles, especially in the shrines (yes, they're technically vaults, I don't care), can be solved in many ways. Some of your skill upgrades can help you cheat a bit, which is cool. The most obvious one is the ability to create a statue of yourself, which can be used to press switches (yes, one of the Zelda inspirations is LOTS of pressure switches) instead of the blocks or stones you might have to find. But even then, be careful, because you can only have one of these statues, and thus delete it if you make a new one. And you may still have needed that switch pressed 10 minutes later, and now have to go backtrack and fix what you screwed up! So it can help you out, but only a little bit. Meanwhile, one particularly memorable shrine to me had a treasure chest on a ledge that was juuusst barely higher than my jumps could reach. After racking my brain forever, I realized one of your offensive skills pushes you into the air without using your jump. Hmmm.... It was such a wonderful little a-ha moment, as it involved something that never before was used for puzzle solving, but still perfectly logical.

Speaking of combat, it's certainly fast and has some stylistic flair. You have three main weapons: sword, axe, and bow. You have typical combos, and then a variety of other skills. Most of those skills aim to increase the stun meter on enemies, which eventually knocks them over and allows you to wail on them for quite a while. Enemies are reasonably varied and naturally taken from Greek mythology (cyclopes, minotaurs, gorgons, harpies), but they do tend to repeat after a while. Still, it ain't bad.

So undoubtedly, this game has a lot going for it. I scoured practically everything in the first area. And the second. Did a thorough survey of the third. Maybe less of the fourth. And almost none of the final area. Wait, what happened? Well, everything is great, don't get me wrong. But it just doesn't hold up forever. One critical concern (and perhaps a necessary evil for open world games) is that the overworld puzzles never get too complex. You see a blocked treasure chest, and you automatically start searching for the switch that needs a block or the torch that needs lit. It's never more than that. The Odysseus challenge (flying a guided arrow through the loops on the handles of axes) seemed like a cool reference the first time I saw it, but boring by the fifth. Shrines are better, since they are more varied in style and type of puzzle, but honestly don't quite reach the cleverness of some of the shrines in Zelda.

But even worse is that it is way, way too easy to become all-powerful. Sure, this is a common complaint in open world games due to leveling up too much or whatever, but there ARE no levels here. It's just that some of the advanced skills are absurdly overpowered once you level up your equipment. I could max out the stun meter on bosses in one or two uses of these skills (which you are also invincible while performing, by the way), and then destroy half their health. No exaggeration: late-stage bosses could be defeated in mere seconds. I don't want to give away any spoilers, but there was one boss I knew was coming based on the structure of the game that I was eagerly anticipating, something well-known from mythology. A similar fight early on (when I was not overpowered) was great fun. But when I finally got there, it was a joke. I barely took any damage and it was over before I even saw his moves. Honestly, random mook hordes are more dangerous than bosses in the late game, simply because one can snipe you when you're killing his friend. It just made combat unfun at the end.

And if the individual puzzles become stale, the combat becomes stale, and there's nothing new to find (everything is just a variant of the same style puzzles), what's the use of continuing to explore? Like I said, I didn't bother to near the end of the game.

So it's not perfect. But don't take that as a reason not to get it, and don't take my downer ending of a review as a reason to fret. I spent a good 50 hours in the game, and even if it doesn't hold up for an amazing 80 hour experience or whatever, the first 90% was totally worth it. That's the beauty of these open world games; you can get what enjoyment you want out of them without being forced into more than is necessary. And is it derivative of Breath of the Wild? Sure, but it's almost 4 years later, so what's wrong with finally getting another similar experience? It's still a darn good game, a fun game, and just different enough from everything else to make it worthwhile.

If you enjoyed this Immortals: Fenyx Rising review, you're encouraged to discuss it with the author and with other members of the site's community. If you don't already have an HonestGamers account, you can sign up for one in a snap. Thank you for reading!

© 1998-2021 HonestGamers
None of the material contained within this site may be reproduced in any conceivable fashion without permission from the author(s) of said material. This site is not sponsored or endorsed by Nintendo, Sega, Sony, Microsoft, or any other such party. Immortals: Fenyx Rising is a registered trademark of its copyright holder. This site makes no claim to Immortals: Fenyx Rising, its characters, screenshots, artwork, music, or any intellectual property contained within. Opinions expressed on this site do not necessarily represent the opinion of site staff or sponsors. Staff and freelance reviews are typically written based on time spent with a retail review copy or review key for the game that is provided by its publisher.