New Super Mario Bros has had one of the more turbulent lives in the Mario series. Upon release, it was the first side-scrolling Mario game in about 15 years and it generated a lot of excitement and goodwill from veteran players eager to consume something in this beloved series that isnt a sports title, mini-game collection, or remake of a game they had already bought. It was the best selling game for the DS and the second best selling game in the series, only eclipsed by the original Super Mario Bros.

Since its release, opinions of New Super Mario Bros have become more muted. Enthusiastic critical reviews comparing it positively to Mario games of yore have been replaced by player reviews over the years that suggest the game received some initial kindness due to the excitement of just being a Mario game when it didnt feel like there were any. Since 2006, weve had more Mario games than at any point in the series history. New Super Mario Bros is now a well-defined series and Nintendo has continued with Mario 64-style exploration adventures too, with Super Mario Galaxy and its sequel, Super Mario Odyssey, and Super Mario 3D World bridging the gap between the two stylesand thats without mentioning all the re-releases and games available through Switch Online.

Over 15 years later, its difficult to look back at New Super Mario Bros and not see how important it was in sending a message to Nintendothat players still liked jumping around on platforms and they should make more of these. But now the word new in the title seems comical. Even at release, it was clearly a throwback. Whats so new about this thing anyway?

This Game is Not New

My history with this game is probably typical of someone my age. I purchased it almost immediately on release. To see Mario running around and grabbing flag poles in what looked like a modern take on the original Super Mario Bros I had played as a child filled me with all sorts of dopamine. I breezed through it, collected all the star coins, andunlike the Mario of my childhoodI never played it again.

Once the novelty of being a (at that time) rare Mario game wore off, it was no longer exciting. It was just fineI guess. The New in the title seemed to suggest the game offered something novel, but it didnt. The trimmed down power-ups, the linear stages, the flagpole at the endthis felt and almost looked like a remake of the original Super Mario Bros. I would have said calling it new was disingenuous. Here on HonestGamers, the most recent review starts with the very statement new in name only and thats not an uncommon conclusion. 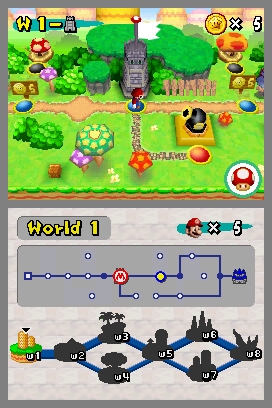 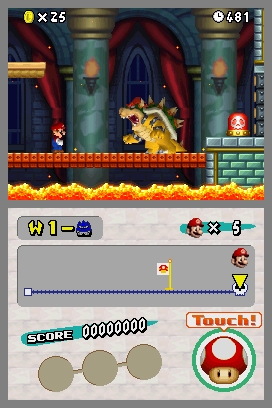 For some, this map and boss tickle all sorts of nostalgia feelies; for others, this is the first time they are seeing this style of game.

New isnt what you think it should be here. The concept of being new is temporal, but a game is fixed in time and unchanging in its own little world. The variable isnt the game; its the player. Players are new or old experienced, and and they bring those experiences into the game to create a one-time event. It sounds silly to point this out, but the time, place, and personal experience can turn one game into something completely different for two different people. We saw that with Dragon Quest IX in a very concrete way, but its just as true with New Super Mario Bros as well.

So lets try an experiment: If you search for New Super Mario Bros DS on YouTube and look at any of the videos of this game, here is a sample of comments youll find:

Besides making me feel old, these comments (and literally thousands like them) tell us something else. New here is not the gameits the player. Being the first side scrolling Mario game in 15 years, there was a backlog of younger players that never experienced this series in this form. A game is an experiencea relationship to the playerand New Super Mario Bros was is an example of one game experienced differently between two generations: the older players who were excited to see a game in the tradition of the ur-nostalgia object in their hearts to which all subsequent games were unwillfully compared against (the unrealistic expectations), and the younger players who had never had their own game where the titular plumber moved on two axis instead of three.

Its two games in one package, but you can only play one of them.

When comparing Super Mario Bros games from the original through to Yoshis Island, it would be shocking if they shared any code in common. The wheel wasnt just re-inventedit was burned and re-built in the ashes of its predecessors. Super Mario 3 added copious variety to a formula where (to me) all the levels looked the same. Super Mario World added secret exits and a level of exploration and replayability that had not been seen before. Yoshis Island was so different, it started a new series. Lets not even talk about the crazy stuff R&D2 was doing to Mario on the Gameboy. The 3D games were no exception either, breaking new ground with every instalment. Except when they were shamelessly selling you games youve already bought, Nintendo never made the same Mario game twice.

New Super Mario Bros is the first time the series received a throwback, adopting conventions the series had disregarded over a decade ago: linear levels, flag poles, fire flowers, and Bowser on a collapsible bridge. Its the first iterative Mario game, building on the original title with elements from new games entwined. 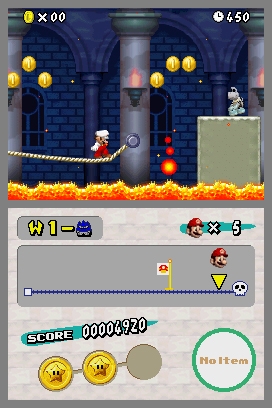 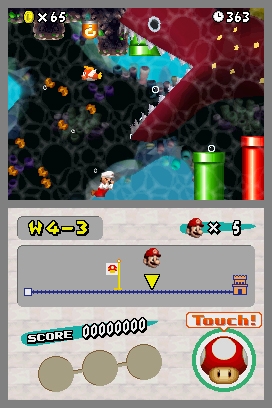 Physics of the rope reacting to Marios weight (left) were not possible in previous Mario games, nor were giant enemies with fluid movement (right).

Mario has some new moves, courtesy of Mario 64, like his delightful butt stomp and wall kick, as well as a secondary focus on collectable star coins. From Super Mario World, we inherit secret exits and multiple routes, though not to the extent of the former. Theres also a few new power ups, though they end up being infrequent novelties, usually only acquired for accessing secret exits. We can find antecedents to most of the design to New Super Mario Bros.

The addition of polygons over sprites makes some things possible that were not previously though. New Super Mario Bros is a 3D game played on a 2D plane (although some enemy 3D models are pre-rendered for performance). This allows for more free-form level design (but not expiration), dropping the tile-based layouts found in every previous side-scrolling entry in the series. There are now slopes of varying severity, swinging ropes, ledges, and set pieces not possible with tiles. Occasionally, the camera will even change its zoom level, allowing levels to accommodate larger or smaller areas when needed. While the tech might not be new, its new to a series that had been largely dormant.

This is perhaps where the generational divide comes in. For those of us that had experienced each successive Mario game as a re-invention of everything we new about gaming, smearing our minds to the wall behind us, New Super Mario Bros is the first game in the series to deliberately not break new ground. It could haveNintendo was not shy about using the DSs dual screen and unique input methods in novel ways, but there was a conscious effort to not make the Mario equivalent of Phantom Hourglass.

By 2006, work on Super Mario Galaxy was already underway. New Super Mario Bros was never intended to bust open side scrollers and set the world ablaze. It was a reenvisioning of a style of games that had largely fallen to the wayside, an important part of series history, and a friendly introduction to a new generation of players that doesnt pre-date. Only that last part is new.

Replaying New Super Mario Bros in 2022, it hasnt changed in 15 years (how could it?), but I certainly have. Where I previously found it to be too easy, it is now just right. Where levels were too short, they are now just long enough. Where I wanted more secrets and stuff to look for, Im fine just looking for 3 coins and the occasional secret exit. I no longer want a portable game to be a console game that last for dozens of hours and kicks me in the teeth. It more relaxing and more fun than I had remembered.

And I have better appreciation for just how cool it is that the enemies hop to the music.

The New Mario series has developed a style of its own nowsmooth and clean with incremental enhancements that allow new mechanics in levels without dumping everything that came before it. New power-ups have been added, more powerful systems have allowed for bigger objects in levels, and multiplayer became more accessible with the move to the Wii U and Switch. But the core of the New series has not changed much from this first game.

Ive watched my daughter (currently eight) play Super Mario 3D Worldnot understanding the camera, mashing attack buttons, burning through lives, and creating completely unpredictable results any time her character left the ground. 3D games are hard to grasp, especially for younger players. At this same time, she eats up Super Mario Maker and just enjoys jumping around. Looking at New Super Mario U Deluxe, theres a character in multiplayer that doesnt take damage and is advertised by Nintendo as great for new players.

The new in New Super Mario Bros was never about the game; it was always about the player.

© 1998 - 2022 HonestGamers
None of the material contained within this site may be reproduced in any conceivable fashion without permission from the author(s) of said material. This site is not sponsored or endorsed by Nintendo, Sega, Sony, Microsoft, or any other such party. New Super Mario Bros. is a registered trademark of its copyright holder. This site makes no claim to New Super Mario Bros., its characters, screenshots, artwork, music, or any intellectual property contained within. Opinions expressed on this site do not necessarily represent the opinion of site staff or sponsors. Staff and freelance reviews are typically written based on time spent with a retail review copy or review key for the game that is provided by its publisher.