While Ratchet & Clank Future: Quest for Booty is a pretty fun diversion, it's one of those games that left me wondering exactly why it exists.

In 2007, Insomniac began a new Ratchet & Clank series for the PlayStation 3, consisting of either three or four games, depending on how one feels Into the Nexus fits into the mix. The first game, Tools of Destruction, ends with Clank getting abducted by an alien race called the Zoni. The third game, A Crack in Time, offers the resolution to that issue.

Released between those two full-size games in 2008 was Quest for Booty -- a short title released on the PlayStation Network that essentially plays as a sequel to Tools of Destruction, while concluding with a very brief bridge leading into A Crack in Time.

Making all of this confusing for me is how PlayStation Now has all the games in this seriesexcept for the first one. Fortunately, we have this little thing called the Internet to get people like me up to date on the Future adventures of the Lombax hero and his robotic sidekick.

So, one of the villains of Tools of Destruction was a robotic pirate named Slag. As per the norm for video game baddies, Slag got slagged during the course of that game. However, in the bumbling Rusty Pete, the dude had one hell of a devoted follower. Devoted enough to lure Ratchet to a tropical island in order to find a way to resurrect his boss by means of one of those "I'll help you find what you're lookingnah, I'm here to help ME!!!" plots. 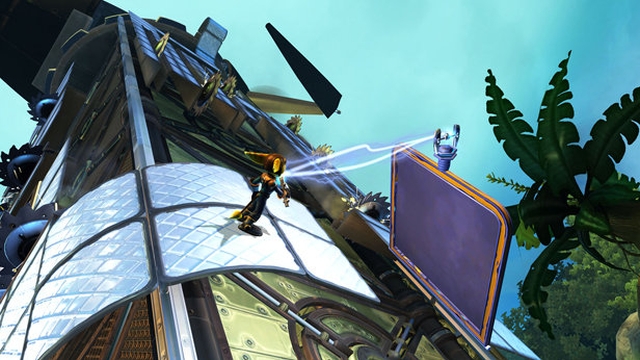 The game, which can be completed in a mere handful of hours, takes place on that tropical island, as well as a couple other locations -- a cave, the hideout of legendary pirate Angstrom Darkwater and a fleet of pirate ships. While there is a decent amount of combat, many of its challenges revolve around platforming and puzzle solving. After fighting through a pirate fleet and landing on Hoolefar Island, Ratchet's first job will be to climb to the top of five towers in order to get their wind turbines working again -- a task that only offers a scant few battles against some pretty non-threatening foes.

Move on to the cave and Ratchet's main task will be to regularly grab brightly glowing grubs in order to chase away invincible nocturnal creatures who would chew through his life otherwise. After a huge multi-wave battle taking place during a brief return to Hoolefar, you'll move to Darkstrom's hideout and need to solve puzzles to prove worthy of collecting the MacGuffin this game's plot revolves around. Finally, you'll return to the pirate fleet for a lengthy multi-phase battle against the final boss.

And, overall, everything is pretty fun. The game isn't overly difficult, although a few of its challenges definitely showed some teeth. It took me a few times to get past the large battle on my return trip to the island and I didn't succeed on a few of the non-combat challenges on my first try. However, I never found myself paused for too long on anything, making the game breezy and enjoyable to get through.

The combination of Quest for Booty's brevity and its focus on platforming and puzzles did lead to one big issue, though. At the beginning of the game, when Ratchet goes from the pirate fleet to Hoolefar, he loses all of his sub-weapons, leaving him with nothing but his fancy multi-use wrench. As you play through the game, you'll regain all those other goodies, leaving him with a total of seven or eight extra means of attack. 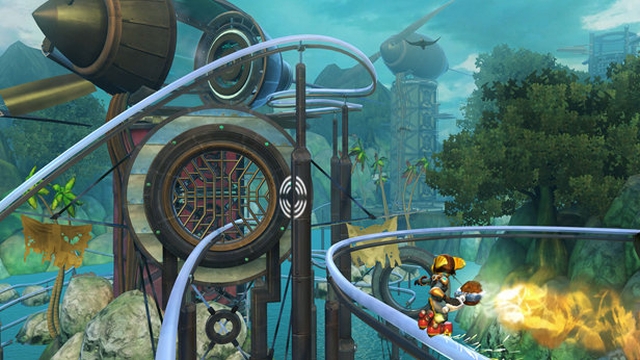 In a game where combat often is secondary to other stuff. It's kind of weird to have this large collection of weapons and so few opportunities to take advantage of them all. I used the Fusion Grenades a lot, the Shock Ravager whip-thing and Combuster gun a fair number of times and, really late in the game when I got something called Nano Swarmers, they proved really useful against bosses because it's hard to top a weapon that attacks nearby foes automatically while I'm focusing on avoiding whatever they're trying to do to me. As for the rest, I'd need to do research simply to remember what they are or how they're used in battle. There simply isn't enough content to make everything useful, especially since weapons level up if you use them enough. I found it best to focus on the ones I liked the most in order to make them more powerful and maximize their usefulness against powerful foes.

I had fun playing Quest for Booty. It's a quite pretty game that kind of reminded me of an interactive Pixar film -- both in appearance and how it effortlessly melded a epic-feeling, if short, quest with humor that often was actually pretty funny. There's a decent variety of challenges. You'll ride rails, regularly jumping from one to the next in order to avoid obstacles. You'll use the tether ability attached to Ratchet's wrench to manipulate platforms and you'll be forced to overcome foes ranging from pitiful crabs to imposing ghost pirates to massive machine-gunning robots.

But it's also a game that doesn't get the most out of its weaponry, can be cleared in an afternoon and really offers very little to the overall story of the Future series other than the final scenes letting everyone know that regular Ratchet adversary Doctor Nefarious would be returning for A Crack in Time. Even if I found this game enjoyable, it just feels unessential -- a filler title primarily created to keep the series fresh in the minds of its fans. If you like Ratchet & Clank, it's definitely worth playing, but the experience is too short to be particularly memorable.

If you enjoyed this Ratchet & Clank Future: Quest for Booty review, you're encouraged to discuss it with the author and with other members of the site's community. If you don't already have an HonestGamers account, you can sign up for one in a snap. Thank you for reading!

© 1998-2021 HonestGamers
None of the material contained within this site may be reproduced in any conceivable fashion without permission from the author(s) of said material. This site is not sponsored or endorsed by Nintendo, Sega, Sony, Microsoft, or any other such party. Ratchet & Clank Future: Quest for Booty is a registered trademark of its copyright holder. This site makes no claim to Ratchet & Clank Future: Quest for Booty, its characters, screenshots, artwork, music, or any intellectual property contained within. Opinions expressed on this site do not necessarily represent the opinion of site staff or sponsors. Staff and freelance reviews are typically written based on time spent with a retail review copy or review key for the game that is provided by its publisher.