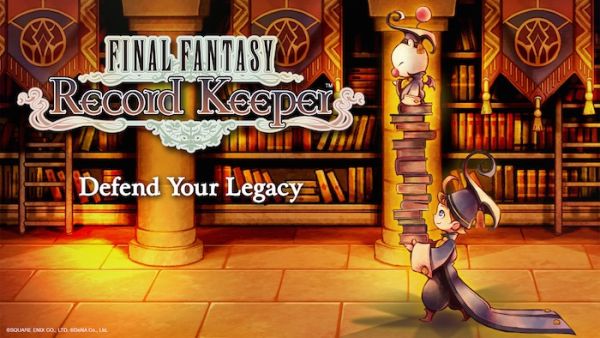 Final Fantasy Record Keeper sounds like it should be the ultimate free-to-play fan service. The mobile app offers nearly every playable hero from Square Enix's hit brand, as well as some classic villains and characters from side games (e.g. Ramza from Final Fantasy Tactics and Wol from Mobius Final Fantasy). Record Keeper also eschews party limitations present in other "freemium" RPGs, allowing you to craft an entourage of your choosing. In other words, you could form a faction of all protagonists, all antagonists or a combination of rivals to form unlikely team-ups. Just imagine uniting Cloud, Sephiroth and Aeirth, and the resulting awkward silence as they travel together. Do I smell a sitcom?

A massive quest lies before you and your hand-picked troop. Fourteen realms, one for each main Final Fantasy title, await you. These domains are further split into stages, based on key events from their respective games, so that you are pitted against relevant monsters and bosses. For instance, the initial gauntlet in Final Fantasy VI is a tour of the town Narshe and its mines, where you battle wolves, bandits and spritzers. After ten simple fights, the monstrous snail Ymir (aka Whelk) pops up for a quick boss encounter that's surprisingly true to the source material. Not only does Ymir retain his original appearance, but also many of his AI routines and abilities. Yes, as in FFVI, if you strike his shell, he counters with a thunder-based attack.

For a couple of months, the rigmarole of entering new stages, crushing familiar baddies and toppling bosses remains charming. Like me, you might log into Record Keeper daily to take advantage of attendance prizes and to check out special events. I even staved off the temptation to tap "auto-battle," mainly so I could enjoy Record Keeper's simplified version of the ancient ATB combat system. And yeah, I'll admit to publicly dorking out to the game's soundtrack, featuring genuine cuts from classic Final Fantasy scores. I'm a sucker for Nobuo Uetmatsu's "The Dreadful Fight" and "Terra's Theme." I can't help myself.

Unfortunately, when you play a game that's charming but not substantial, that initial enchantment eventually wears off. Eventually, I became reluctant to initiate the app, but unable to break away from it. After all, there were always new levels to delve into and prizes to earn. However, it didn't matter if I took part in a skull-crushing nightmare dungeon, participated in an event for impressive rewards or advanced the campaign, because the experience seldom differed. I'd enter a stage, tap auto-battle and set my phone down to do something else. I'd hear the victory fanfare minutes later, signifying that it was time to tap a few on-screen buttons before putting Record Keeper back on auto-pilot.

Sure, I could forego the auto-battle option and manually engage my foes, but doing so doesn't alleviate the tedium. You see, Record Keeper's version of ATB is primitive, since each party member only has five commands: fight, defend, soul break (basically the same as limit breaks), and two additional abilities for you to set. By "abilities," I don't mean broad categories like time magic, blitz or lore, as seen in various Final Fantasy titles. Rather, each ability is a specific skill or spell, such as cure, firaga, water strike or the Ifrit summon. On top of that, most non-boss enemies perish after a basic strike or two. With so few options, there's no reason to abstain from automated violence.

On the flip side, if you're not powerful enough to stomp the opposition into the dust, then you're pretty much screwed. Though you may succeed in defeating many of the goons leading up to the area boss, it's likely your squad will lose significant portions of their hit points along the way. You'll soon realize that attempting to conquer a mission that's out of your league is a fool's errand, especially once the boss trounces you with minimal effort. In terms of challenge factor, Record Keeper fails to offer a middle ground.

It's possible to slay a super tough boss, but the requirements for accomplishing such a feat nullify many of Record Keeper's perks. In order to win that sort of confrontation, you need to ensure your survival while maxing your damage output. An easy way to accomplish this is to take advantage of synergy bonuses, which means utilizing a realm's native party members and equipment. For instance, Steiner equipped with a coral sword deals more damage in a Final Fantasy IX stage than he does in any other event. While this sounds neat, relying on this method to tackle trickier segments spoils Record Keeper's customization aspect.

If you don't want to toss customization out the window, you could always farm mythril and use it to acquire new armor and weapons. If you're lucky, you'll stumble upon powerful weaponry and items that provide your warriors with advanced soul breaks. In my own playthrough, I managed to obtain a knife that imparted a devastating "burst soul break" unto Vaan. Thus, the man I once regarded as the brand's most annoying character suddenly became my greatest asset. After boosting him, upgrading his knife and even raising his level cap, I saw him single-handedly dispatch overpowered bosses. Of course, that's only because I was lucky enough to receive his knife in the first place, and I was fortunate that the boss in question didn't drop Vaan before his soul break was ready to use.

Unfortunately, both of the above strategies require grinding and farming. In other words, the only way to liven up Record Keeper's dull battle system is to play the living hell out of Record Keeper's dull battle system. To make matters worse, the game regulates your play time by imposing stamina on your group. Every time you enter a dungeon's tier, you spend stamina. If your supply is insufficient, then you can't enter a tier. More advanced levels require so much stamina that you'll be lucky to take on one boss every hour or so.

Final Fantasy Record Keeper's core concept is lovely. Unfortunately, DeNA didn't utilize it to its fullest. The experience grows wearisome after a couple of months, and any methods needed to spruce it up are not worth your time. I commend the developer for crafting a nostalgic, free-to-play Final Fantasy entry that does justice to some of the franchise's greatest moments. Sadly, due to its repetitive nature and reliance on luck, I can't wholeheartedly recommend this mobile installment.
3/5

If you enjoyed this Final Fantasy Record Keeper review, you're encouraged to discuss it with the author and with other members of the site's community. If you don't already have an HonestGamers account, you can sign up for one in a snap. Thank you for reading!

© 1998-2021 HonestGamers
None of the material contained within this site may be reproduced in any conceivable fashion without permission from the author(s) of said material. This site is not sponsored or endorsed by Nintendo, Sega, Sony, Microsoft, or any other such party. Final Fantasy Record Keeper is a registered trademark of its copyright holder. This site makes no claim to Final Fantasy Record Keeper, its characters, screenshots, artwork, music, or any intellectual property contained within. Opinions expressed on this site do not necessarily represent the opinion of site staff or sponsors. Staff and freelance reviews are typically written based on time spent with a retail review copy or review key for the game that is provided by its publisher.