I remember having qualms about the new aesthetic High Moon brought to the table in the wake of Micheal Bays adaptation of Transformers. My favourite autonomous technological organisms were at a glance - from a distance - malformed and unfamiliar in design. Not to say I hadnt seen some interpretations of these characters before, but the embattled, edge-worn style took some getting used to. But then I started playing it and forgot all that, because this is the one where they got everything right.

You could, arguably, play this game and not pay any attention to the story, which is both deep and many decades old by this junction. There is a specific appeal to this franchise, but you could comfortably ignore the multilayered narrative elements without detriment to game mechanics. Thats a good thing, because if you do have any appreciation of the characters and their very violent universe, youll notice the ample amount of time and work that have gone into reproducing well known situations and characters.

As this is the direct sequel to War for Cybertron it bears mentioning that on nearly every front this is the more mature, experienced and attractive evolution of its older cousin. I say cousin because Fall of Cybertron feels like a different game, though most of the characters have the same models and designs. Environments are brighter, more varied in pallete and design; story progression is more linear but caters more favourably to variety in playstyle and new mechanics; events are more epic and combat less frustrating, being shorter in duration with more frequent breaks to reduce combat fatigue. 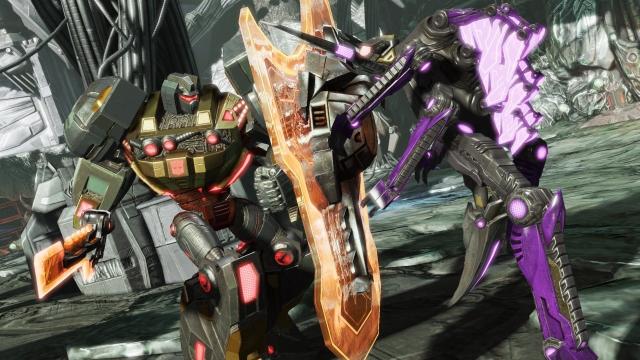 I want to gush about this game, but I have to get one - and possibly the only - gripe off my chest right now: Every cutscene has badly mixed audio! Sound effects and music blare over dialogue which is drowned out so as to be incomprehensible. This may not be Shakespeare, but we did pay to hear our favourite characters voices as well, so its a disappointment when High Moon pulls off a decidedly epic starring appearance and flubs it so hard. As the cutscene audio is baked in, theres no way to make adjustments, and it just feels like the result of rushed development.

Fortunately, the rest of the game fares far better, and its high points easily compensate for minor flaws such as this. Before we get on to those high points, though, why dont we traverse the battlefield specific so we know what were dealing with: This is a story based shooter wherein you assume the role of famous, and infamous, Autobots who are trying to escape the dying planet, Cybertron, and the Decepticons who are trying to enslave/destroy them. The story is presented in chapters, where youll play one select character for some - if not all - of the duration of that chapter.

At any point during a chapter you can and will automatically be shunted from one character to another, and the story will provide a sort of on rails vector for these transitions. Its actually quite smooth and most of the time entertaining to try out a new character with interesting abilities and personality. Youll begin by playing as Bumblebee for a sort of tutorial mode to acquaint you with game mechanics, have a major run in with the story, and then be sent on your way to play through the game to catch up to this major plot upset. 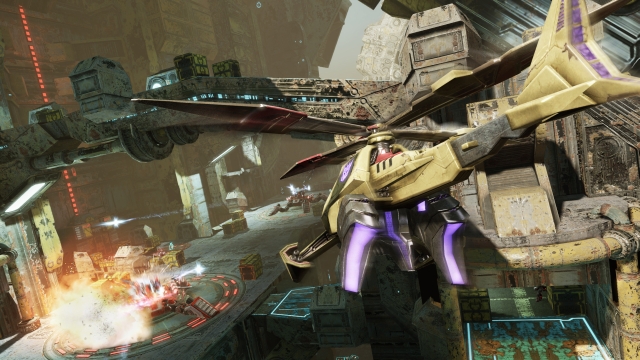 Yes, its got one of those oh no thats bad moments, but I have to say it didnt exactly have me hanging on the edge of my seat. Ive seen these characters go through so much at this point that ... well ... I dont care except for what the game allows me to do about it. Thats the point, I suppose, and a good standpoint for a game, no less. I cant cite a single complaint about the characters I was given to play with, except for Soundwave, who was underutilized, but then combat isnt exactly his forte. Not much fun being the odd bot out, even if he is one of the coolest of the lot.

The pacing of level design is such that you really are given a chance to properly explore characters like Jazz, Cliffjumper, Starscream and Megatron. There are enough recognizable Generation One story beats and recreations to endear this game to anyone looking for those cues, though you may be disappointed by the lack of Frank Welker, though his replacement does a fine job as Megatron. On the subject of voice acting, the team assembled here gives as good as they get, and I dont recall hearing a single weak performance or false note from these industry regulars.

A big shift in mechanics, however, comes in the form of how the bots use abilities and upgrades. Instead of gathering floating energy bits to recharge abilities, they recharge automatically over time and can be augmented by upgrades purchased at Teletraan stores located throughout your journey. There youll spend your hard won currency on weapon upgrades, performance enhancements, drones, shields and much more. Anything you unlock is available to all subsequent chapters irrespective of the character you happen to be playing. Theyll even be preserved if you choose to play again after completing the game, which is handy. 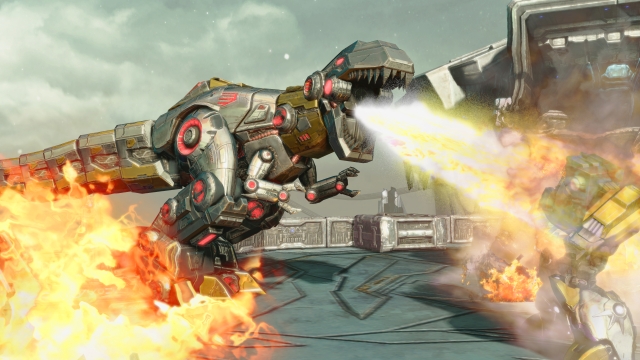 Theres even a rating system that will show you what other players think of all this, but Id say it was wise of High Moon to omit comments. Overall its much easier to deal with Teletraan than hope youll stumble into what you need along the way, because you can equip weapons youve unlocked along with all of their upgrades, which is very useful indeed. The only drawback I encountered was that its only possible to unlock a couple of weapons and all of their upgrades fully on a single playthrough, but that may not be a problem for you if you plan to play through more than once.

Transformers: Fall of Cybertron had to step up in a big way thanks to the accomplishments of War of Cybertron, which really was a return to form for the franchise. How many Transformers games can you rattle off that had mainstream appeal before this one? It might not be aging all that well, but it brought the franchise back into gaming relevance, and that is not to be underappreciated.

High Moon took two big chances by giving us one playable Combiner and one unplayable but suitably presented Metroplex who takes center stage in his commanded performance. Both are fun and the latter even awesome. Imagine being a kid getting to play with these digital toys, hm? Pardon me for sounding like a grizzled old man when I remark that all we had was our imagination and plastic to batter around. Not to digress too far here, but I can see how full realization of these characters may be underwhelming compared to our imaginations - a point I know I made in my review of War for Cybertron. 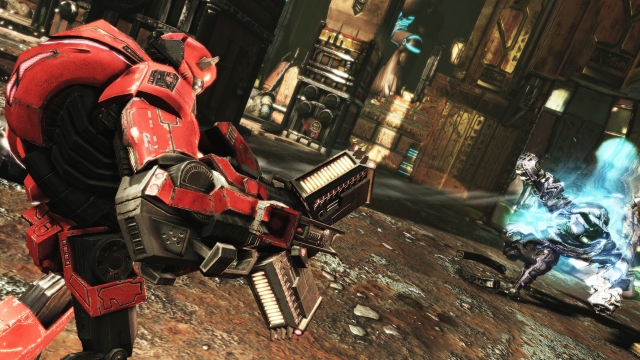 While were at the tail end of this review, I might as well mention the other two modes of this game that arent Campaign. Escalation will pit you against foes of increasing strength while Multiplayer ... well, pits you against anyone still willing to do so. You can unlock two female Transformers to play in these modes, but unfortunately they dont have a place in this games story.

If you enjoyed the previous game at all, youll undoubtedly fall in step quickly with the improvements made here and have a thunderously good time. I havent even mentioned some of the most exciting cameos, simply because I believe theyre worth discovering for yourself. Even so, your place in the action is assured and role well defined, so Id recommend you give this examination of Cybertrons civil war a try.
4.5/5

If you enjoyed this Transformers: Fall of Cybertron review, you're encouraged to discuss it with the author and with other members of the site's community. If you don't already have an HonestGamers account, you can sign up for one in a snap. Thank you for reading!