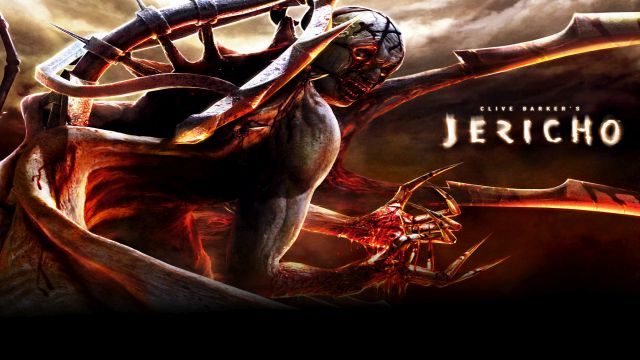 Pyxis Prime is a prison. However, it doesn't contain rapists, murderers or thieves, but its intended purpose is to hold a single inmate whose only crime was birth. This being is referred to as the Firstborn, God's initial attempt at life. Displeased with His first life form, God decided to lock it away in a Purgatory-like dimension. Understandably, the Firstborn didn't appreciate its incarceration, and thus tried to escape numerous times. Thankfully, a septet of warriors versed in magic, psychic powers, and witchcraft--known as Jericho--thwarted every attempt...

Clive Barker's Jericho delves into a modern day Jericho team, comprised of a motley crew with skeletons in their closets. Following a breach in Pyxis Prime's "security," Jericho assemble to deal with those responsible for the issue and reseal the Firstborn. You first take the role of Capt. Devin Ross, a psychic healer. Through him you catch glimpses of the life that each member leads. However, the significant bits of the story don't get rolling until after Devin dies early in the campaign, murdered by his winged archnemesis Arnold Leach. However, Devin's role does not end because of his death. Rather, he takes on a spiritual form and possesses his teammates, thereby allowing you to switch between characters at will.

Shifting from one teammate to another works in Jericho's favor, both in terms of narrative and gameplay. Through this feature, we uncover the cast's shady pasts and even come to empathize for them all the more as the campaign advances. For instance, we discover that Billie Church was raped by her father, but has pulled her life together enough that she doesn't allow her traumatic past dictate the kind of person she is in the present. There's also Father Paul Rawlings, a priest who hasn't exactly been the most virtuous person in accordance to his beliefs. We learn that the man has a weakness for drink, which has led to his inability to maintain his vow of celibacy. Before you can call him a hypocrite, though, the man says something completely expected but nonetheless valid: "I'm only human." Each member of the game's squad is "only human," which is what makes all of them prime candidates for horror story characters. Having a cast audiences can identify with and root for usually makes for more terrifying situations, especially when each combatant is thrust into grim circumstances. 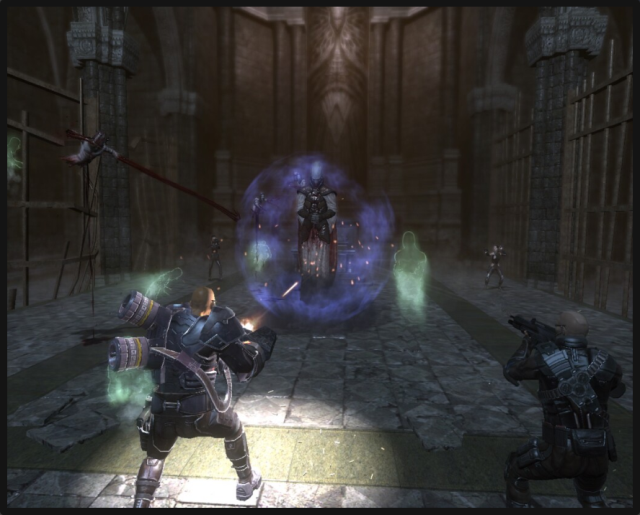 Changing teammates also allows you to experiment with each character's spells and weaponry. I'll admit that it's pretty damn neat, at first, to see what your squad is capable of. Billie Church, for instance, carries a nodachi that's perfect for stealth kills. She also uses blood magic that can immobilize or immolate her victims. Of course, if you're more into sheer power, you can assume the role of Frank Delgado. Frank comes equipped with a super-powered minigun and carries a semi-automatic pistol on the side. For times when his firepower isn't enough, he also summons a dragon-like fire elemental to reduce the opposition to cinders.

If you couldn't tell, I've been scraping for positive things to say about Jericho. The game promises an awesome story loaded with action and scares. While it mostly delivers on the narrative front, Jericho falters when it comes to interaction.

For starters, the game isn't scary whatsoever, mainly because it relies too heavily on enemy design to drive its fear factor. The problem is that the monsters are cool-looking, decked out with horribly deformed bodies, blades for arms, gaping sores aplenty and even tentacle-like fingers. There are even some fiends covered in pustules that explode after taking a certain amount of much damage. Unfortunately, I find myself admiring the monster designs more often than trembling at the sight of them. What's worse is that none of the situations involving these creatures play out in terrifying ways. The monsters usually burst onto the scene and the members of your team regard them as standard targets and commence gunning them down. Your teammates' cool and calm demeanors during combat doesn't tell me that I should panic whenever the beasts arrive. Rather, it makes me quite confident that my team will survive another round and not suffer a grisly fate. Without the fear of failure and the prospect of winding up some grotesque monster's lunch, there's really nothing to fear at all. 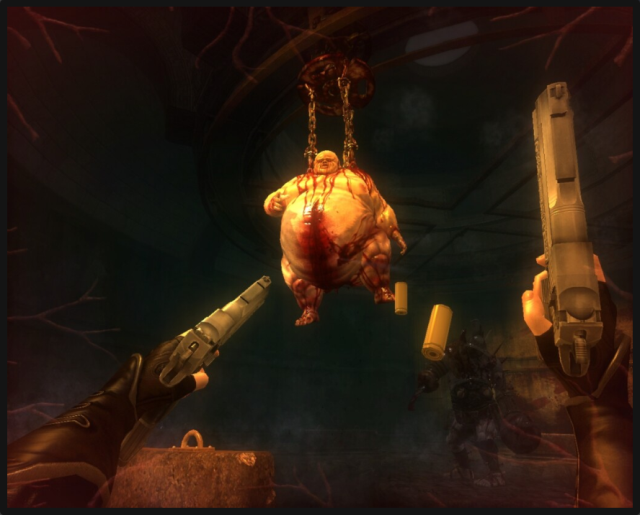 An expansive and imposing bestiary could have bolstered the experience, but sadly you fight the same enemies ad nauseam. This is especially so about the bladed enemies and the pustule-covered menaces. Nearly every fight involves gunning down hordes of these two, as well as whatever era-specific monsters that happen to populate your current stage. You'll seldom find yourself altering your strategy, and it isn't long before you realize the game basically rehashes the same battle repeatedly.

Level linearity also doesn't help, though Jericho does sport great environmental visuals. You'll tear your way through the gritty ruins of a Middle Eastern city, wade in waist-deep filth through abandoned Roman baths, blast foes to bits in the depths of a medieval keep and match both wits and strength with undead priests in a Sumerian temple. Each setting is fittingly dingy and shadowy, and perfect for hiding vicious demons and fell beasts. They also beckon you to explore more deeply, even though you cannot. Rather than providing branching pathways or convoluted corridors with hidden secrets and goodies, Jericho's interdimensional construct consists of a tight rail with few opportunities to stray from its prescribed path. 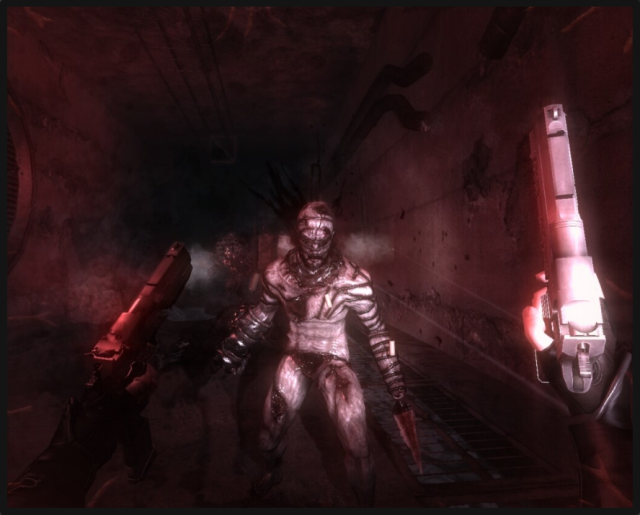 What especially drives me absolutely nuts about Jericho, though, is the game's faulty squad AI. You may notice instances in which your teammates fail to run for cover when they should, allowing bladed freaks slice them to ribbons. Worse, they tend to gravitate in droves around the exploding puss-monsters, resulting in multiple deaths when the creatures detonate. Thankfully, death is not permanent in Jericho. You can revive your comrades via magical healing an unlimited number of times. Unfortunately, since your teammates have a propensity for getting killed, you will sometimes find yourself playing healer more often than front line warrior.

Clive Barker's Jericho is rife with fantastic ideas that are poorly executed. Worse than that, it's a great story with likable characters attached to a mediocre first-person shooter. Good stories can only carry some titles so far. I think a great many of us enjoy gaming for its interactive elements. I don't know about any of you, but it wasn't a human story that got me through Super C or kept me playing Escape Goat. Don't get me wrong, though; I won't dog effective storytelling in video games. It's just that interactive elements should be the primary concern of a project. Narrative can still play a pivotal role, but I tend to find a game's mechanics and interactive concepts are much more important.
2.5/5

If you enjoyed this Clive Barker's Jericho review, you're encouraged to discuss it with the author and with other members of the site's community. If you don't already have an HonestGamers account, you can sign up for one in a snap. Thank you for reading!

© 1998-2020 HonestGamers
None of the material contained within this site may be reproduced in any conceivable fashion without permission from the author(s) of said material. This site is not sponsored or endorsed by Nintendo, Sega, Sony, Microsoft, or any other such party. Clive Barker's Jericho is a registered trademark of its copyright holder. This site makes no claim to Clive Barker's Jericho, its characters, screenshots, artwork, music, or any intellectual property contained within. Opinions expressed on this site do not necessarily represent the opinion of site staff or sponsors. Staff and freelance reviews are typically written based on time spent with a retail review copy or review key for the game that is provided by its publisher.