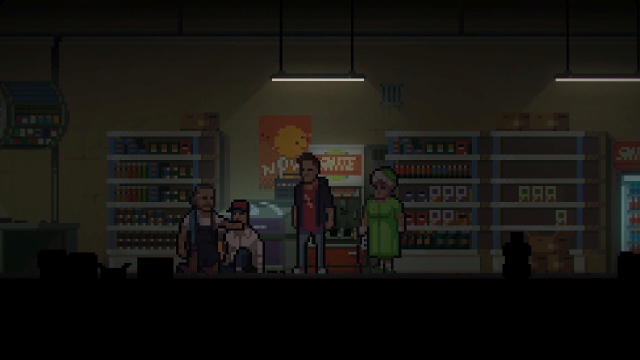 The Long Reach's opening segment absolutely beckons you to play the game to completion. Its retro-style pixel graphics mesh well with its dark lighting and gritty atmosphere, hooking you with the promise of a macabre, faux-retro adventure. You first follow a brief subplot involving a buffoonish man as he makes his way to a corner shop. Upon entry, you know something awful is about to go down, and boy does it ever. From there, the tale cuts to a trio of scientists conducting an experiment. You don't know the nature of this research, but given the grisly display you just watched, it can't be good. And just as they begin the study--BAM--the world flips upside down.

The protagonist, Stewart, has apparently passed out, and now awakens to a wrecked lab. At this point, the game has effectively worked its spell on you, and you must see it through.

You must learn more about this experiment.

You must discover who or what trashed the laboratory.

You must find some way to ignore the horribly off-putting dialogue choices.

Yes, sadly, this game doesn't entirely make good on its strong start. The first cracks show early on, when you notice a lot of sarcastic dialogue choices and NPC responses that don't sit well with the gloomy mood. At one point, a character mentions they have a sister named Meg, to which someone replies, "Shut up, Meg!" Yeah, that's right; there's a dated "Family Guy" reference in this modern horror game. On top of that, numerous other bits of pop culture find their way into the proceedings, and they're quite out of place. Stewart, for instance, comments on a someone's stormtrooper helmet, and somehow the experience loses some of its horrific touch.

That's only the start of it, too. With each new chatty scene, you get a different set of dialogue options for Stewart. Among them, you receive lines that transform him into a facetious dick. I'll admit, conversations like these could work in the right situation, but this isn't it. The game ends up feeling more like it's trying to be an off-beat comedy and failing at it. Obviously, you don't have to pick the saltier selections, but just their inclusion breaks immersion enough that it's hard to take Reach seriously. 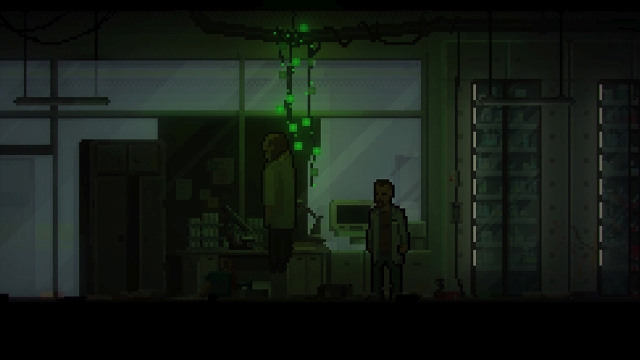 Never mind that exactly no one in this story is likable. Horror fiction works well when you care about at least one character, and you can't bear to see them suffer an ill fate. Any piece worth its weight exploits this principle repeatedly, placing our beloved hero in danger as often as possible. In this case, Stewart runs afoul of some pretty creepy perils. As he ventures out of his portion of the lab, he finds the facility on lockdown, and that most of the staff has gone insane. One man thinks he's a very friendly, albeit skittish, pet dog. However, another dude (Alan) stalks the halls, armed with a bloody instrument he isn't afraid to use.

Although moments with Alan prove to be decent visceral scares, they could've had a heavier punch behind them if you actually cared about Stewart. The thing is you don't know anything about the guy. By the end of the game, all you learn is that he's tone deaf and he's got a penchant for snarky remarks. Why should anyone care if he makes it out of the facility alive? What stake does he have in this situation besides just his life and freedom? Nothing about the guy resonates, unless you also happen to be a smartass with very little personality.

Still, you feel compelled to venture through the title because you want some answers. However, you're terrified that the explanation you receive is going to hamper the experience further. One of the main things driving the fear factor here is that you don't know exactly what's going on. Eventually, you get some of your answers, and you can't help but grimace a little. For one thing, the person dishing the info doesn't give you a full explanation. They try to offer up a simplified, incomplete one because Stewart isn't smart enough to understand the situation. Give me a break. Look, I'm a fan of horror stories offering as little info as possible to maintain the "fear of the unknown," but a weak revelation like this comes off as more of a cop-out. 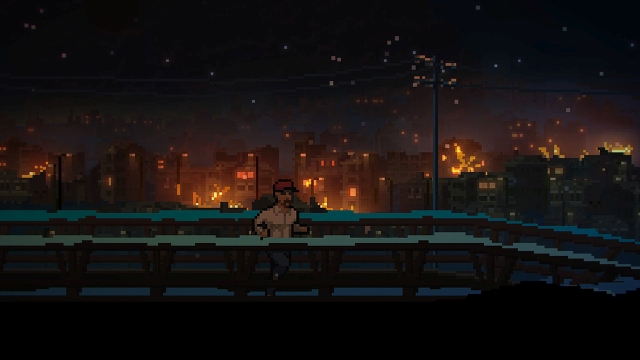 Some of the game's inventory-based puzzles might keep you interested, because they are somewhat engaging. One, for instance, requires you to fire up a generator. You accomplish this by finding the necessary items, which are hidden in your vicinity. All you need to do is explore the hallways, enter rooms attached to them and snoop around. Eventually, you locate the goods you need, you know almost immediately what purpose they serve, and it's satisfying watching the pieces fit together.

Unfortunately, you bump into of a lot of irritating challenges, too. Quite a few of them lean heavily on trial an error, such as one task that transpires during a hallucination. You find a bell on a tree, plus a few nails sticking out of its trunk. Next to the tree is a giant door covered in ivy, which recedes a little when you ring the bell. Your objective here isn't clear at first, but by spamming your entire inventory, you eventually find out which objects to place there and how to properly use them. 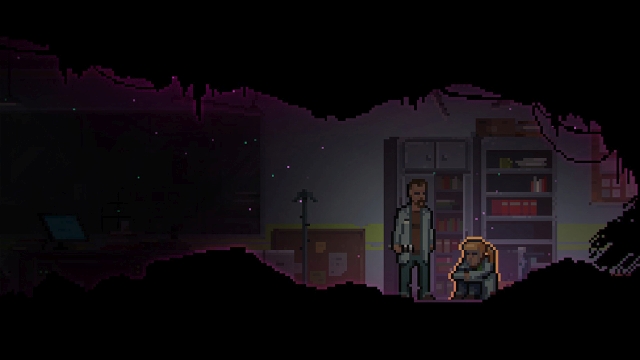 Another one that almost pushed me over the edge revolved around a man hanging in a pharmacy. You use an extension cord to provide some light, but after that you don't know what to do. Your goal here isn't obvious, and it seems like the game just wants you to gawk and a guy who hung himself with Christmas lights. It took me some time to figure out what to do, mostly because the game offered no hints or suggestions. Stewart just says, "Welp, there's a dead guy," and that's that.

Near its end, this game tries to be a psychological mind-bender. The problem is you stop caring about the plot by that point. Granted, some of the stuff you learn is neat and creative, and the conflict itself--what little the game divulges--has some creepy implications. However, apathy sets in somewhere about halfway, when you decide you definitely don't like Stewart that much, or any of his cohorts for that matter. You have no one to root for because so many characters are either flat out awful people or under-developed. If its powerful introduction, appeals to nostalgia and sarcastic blather are any indication, The Long Reach is something of a narcissistic game. It's more focused on getting players to dig the title itself, and less interested on providing reasons to invest in its campaign or its tale.
3/5

If you enjoyed this The Long Reach review, you're encouraged to discuss it with the author and with other members of the site's community. If you don't already have an HonestGamers account, you can sign up for one in a snap. Thank you for reading!

© 1998-2020 HonestGamers
None of the material contained within this site may be reproduced in any conceivable fashion without permission from the author(s) of said material. This site is not sponsored or endorsed by Nintendo, Sega, Sony, Microsoft, or any other such party. The Long Reach is a registered trademark of its copyright holder. This site makes no claim to The Long Reach, its characters, screenshots, artwork, music, or any intellectual property contained within. Opinions expressed on this site do not necessarily represent the opinion of site staff or sponsors. Staff and freelance reviews are typically written based on time spent with a retail review copy or review key for the game that is provided by its publisher.