Are you in the market for a genuinely interesting story full of intrigue, torture and Satanism? But one told in such a condensed manner that the entire premise comes off as more of a back-of-the-book blurb then a fully fleshed story? Are you also looking for a new adventure game? But with stilted animation, overly easy puzzles and a disparagingly short run time? What a wildly specific experience you hanker over; thats a little odd. But not to fear, my weird chum, because Pendolo have you covered. The game youre after is Yesterday. Prepare to be mildly underwhelmed!

Thats more than a little unfair, because Yesterday does several things very, very well, but theyre constantly undercut by the short run time and the abbreviated feel of the story its trying to tell. Thats the real crime: Yesterdays tale deserves a stronger commitment and more time to develop. It deserves its chance to be told in full.

Its almost the tale of John Yesterday, whos almost a historical expert on Satanism, or is he perhaps some kind of a private investigator? Who knows? Certainly not John! He has amnesia. And, I know, thats been the crutch of bad video game storytelling since forever, but Yesterday makes the bold attempt to be that one game that actually uses it to good effect. 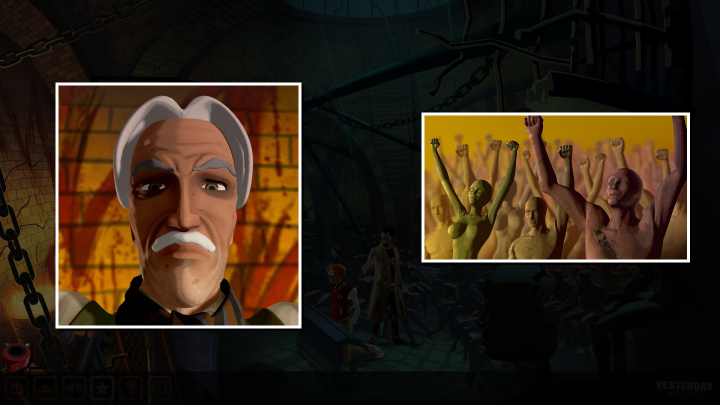 Maybe it works because while Yesterday is certainly Johns tale, the story has grander designs than just talking about John. Is that overtly cryptic? Good. As a protagonist, Johns importance to the main character role is routinely adjusted on the fly. Hell, you dont even meet him until the second chapter, with the first bit of inventory-based sleuthing based around his eventual benefactor, Henry White. These weird time jumps bleed into each other to tell a tale hell-bent on bitch slapping continuity and playing havoc with your expectations. The problem is that each time youre left to digest a particularly impressive plot twist, another is waiting, barely concealed, the next scene over.

Yesterdays run time should be less than five hours. Its not very long, and the puzzles involved are not particularly challenging. Should you get stuck--and shame on you if you do--then the game tries to cock block you Alt+Tab-ing away to a YouTube walkthrough via a built-in hint system. Only, in quite a clever manner, it tries to make you at least work for your shortcuts. Rather than just hurling direct answers at you through the entire adventure, the game expects you to at least put in some effort to figure things out for yourself. The hint icon needs to be full before it will help you out of your conundrum of choice, and you can only fill it by trying out various solutions. True, you can bypass this by abusing the ancient method of randomly clicking everything on everything else until: a) something unexpectedly works and offers you a new angle; or b) the hint system tires of your inability and gives you an answer. But its a well thought out way to try and keep the player invested.

I never really had to use the function, and perhaps thats my problem; Im a genre vet. One of the proudest moments in my life thus far came when I managed to beat the original Discworld long before GameFAQs.com was even a thing. I finally outsmarted that damn goat in Broken Sword. Ill out-Monkey Island-quote you in a heartbeat (dont push me; Ill do it!). Ill replay The Longest Journey every few years for fun. Those of you nodding along with my proven mental pedigree will likely find yourselves in the same boat I occupied; most of those titles are luxurious marathons, and those expecting carefully drawn-out epics to fulfill their Adventure itch are going to feel short-changed by Yesterdays abridged nature. 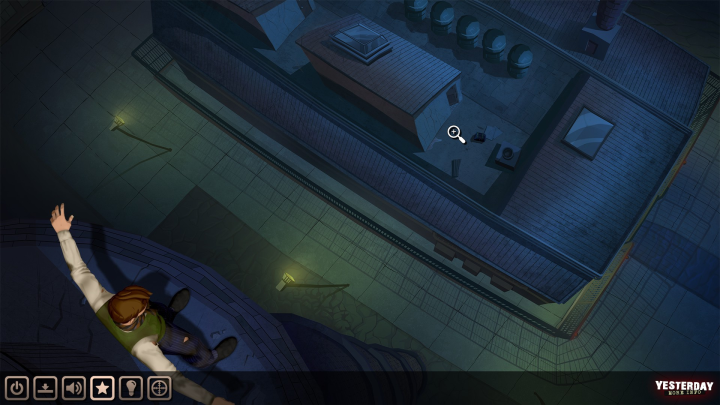 But maybe not you. Maybe the idea of such a prolonged trudge through a game horrifies you, and perhaps that turns my issues with Yesterday into your saving grace. Though sometimes rendered bumpy and stifled, the games short, focused narrative never particularly slows down. The ease with which the puzzles are solved, the availability of a uniquely interactive hint system and the cunning containment of each area (that ensure you know the answer is always nearby, and the key to your puzzle isnt some pixel you failed to sweep over several scenarios ago) means it rarely hangs in place while you struggle over an obscure solution.

Which can help you smash through Yesterday in a handful of sittings without issue. This makes it ideal for players perhaps looking to ease into the Adventure genre, giving you lazy slackers plenty of time to check your social media or, urgh, go outside. Its even been toned down for your weakling sensibilities, having the most suggestive torture images removed and taking out a few instances of nudity. Even still, Yesterday managed to surprise and impress me with some of its ever-winding tale and sometimes clever story crafting. Puzzling my way to its conclusion may not have stroked my ego, but it wasn't an awful way to whittle away an afternoon.
3/5

If you enjoyed this Yesterday review, you're encouraged to discuss it with the author and with other members of the site's community. If you don't already have an HonestGamers account, you can sign up for one in a snap. Thank you for reading!

© 1998-2021 HonestGamers
None of the material contained within this site may be reproduced in any conceivable fashion without permission from the author(s) of said material. This site is not sponsored or endorsed by Nintendo, Sega, Sony, Microsoft, or any other such party. Yesterday is a registered trademark of its copyright holder. This site makes no claim to Yesterday, its characters, screenshots, artwork, music, or any intellectual property contained within. Opinions expressed on this site do not necessarily represent the opinion of site staff or sponsors. Staff and freelance reviews are typically written based on time spent with a retail review copy or review key for the game that is provided by its publisher.