Larry Laffer is a protagonist whose time has come. Heh heh, heh heh. Sorry, but it's probably best if I make it clear from the onset that I'm going to be ever so slightly juvenile and crude at various points during this review's remainder. Lowbrow humor is, after all, what the Leisure Suit Larry franchise has been about since its conception in 1987. Penis jokes. Nerdiness. Profanity. Nudity. SEX! They're all here, and Larry isn't having any of it. Or rather, he's not having any of that last thing, despite his efforts to the contrary.

Leisure Suit Larry: Wet Dreams Don't Dry begins as Larry wakes in an underground bunker. How did he get there? We may never know. But there he is, still dressed in his ridiculous white suit and still glowing with unearned confidence (or maybe just a cocktail of sweat and too much cheap cologne). He rides an elevator to the city street overhead and finds himself standing in front of a familiar haunt: Lefty's Bar. So of course he heads inside, where he meets a selfie-taking hipster girl who consents to let him purchase her a brew from the barkeep. Whatever ingredients that suspicious beverage contains don't go down easy, so she rushes off to the restroom and Larry follows not long after her. One thing leads to another, and before you know it, he's fishing a smartphone out of a pile of sludge and getting acquainted with a virtual assistant who leads him back to the headquarters of Prune, where the device was manufactured. There, Larry meets Faith, the (most recent) woman of his dreams. She says she will only date him if his Timber score is over 90. The obvious joke would have been "over 9000," but the writers didn't go for it. I'm slightly disappointed in them. 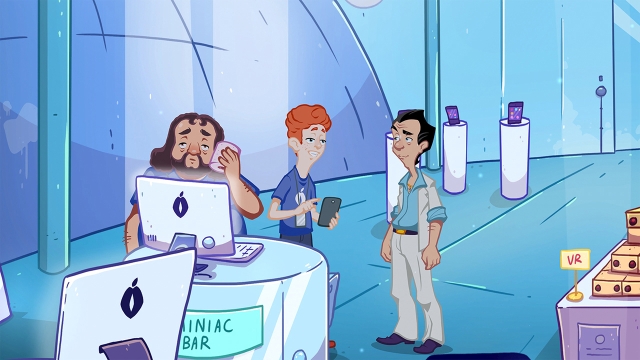 Your overall goal as you play is to help Larry acquire the prescribed score by putting himself out there in an exaggerated 2018 world. Only by pleasing enough women--and men--throughout the city of New Lost Wages can Larry hope to have Faith. It's true: he has been given a license to screw. After all, how else is a middle-aged nerd going to get people to talk him up on social media? What other hope does he have of going viral?

Dating is complex in this world. You start by finding Larry a few matches (and sprucing up his dating profile so he looks better online than in person, of course). Then you have to prove you're actually worth your prospective date's attention, by completing the sort of tasks for which these point-and-click adventures are known. That means a lot of running back and forth between the various locations--or rather, catching a ride with Unter--and looking all over for items that can be manipulated, collected or combined to yield positive results.

More than I expected, playing Wet Dreams Don't Dry reminded me of assembling a puzzle, albeit one with drag queens, bouncers, hipsters, "influencers," sex shop owners and entrepreneurs rather than jigsaw bits. There are dozens of environments, beautifully drawn and filled with enough jokes that I was still noticing new things on my fourth and fifth trips to some destinations. Larry usually has several objects in his possession, and they seem mostly inane or bizarre at a glance, but he can look them over and often use them to fill in more of the story. Then he can revisit familiar territory and suddenly he'll have a better idea why there is a bowling ball on that one counter, or a gramophone in the juice bar those bearded hipsters operate, and so on and so forth. The moments when the light comes on and you know what to do next feel great. Best of all, they usually also feel earned. The puzzles are fiendishly difficult at times, but fair. I rarely resorted to the cheap trick of trying to combine random items from my inventory, because the writing and descriptions were solid enough that I didn't need to cheat as long as I was willing to think outside the box. 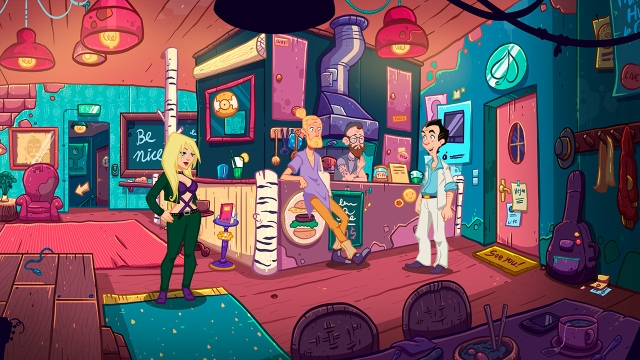 Sometimes, the game got in the way of that process. I would have an idea where I needed to go, but first I needed an item to gain entry (i.e. lube). And I would know about how to acquire that bauble, but first I needed to complete some other task that had me stuck. I kept unearthing new clues pointing to a solution I already had figured out, but I couldn't get new details on the other challenge that had me stymied. Because the world is sufficiently expansive--not huge, but big enough and intricate enough--and progression tries its best to be non-linear outside of a few necessary choke points, I usually had several balls in the air at once. I just couldn't touch any of them, which left me feeling like the world's most inept juggler. Then things would come together and suddenly I was off and running.

In point-and-click games, sometimes it can feel like you must explore every inch of screen to make sure you don't miss anything. Smartly, the developers let you press a button to highlight every possible point of interaction. This feature is all but necessary in the sometimes crowded environments, a convenience well worth utilizing. It saves a person the trouble of moving the cursor over every tiny detail in hopes that a prompt will appear, lets them focus on the stuff that actually matters. I played through most of the first half of the game without recognizing the resource I had been given--which is entirely my fault--and I probably could have saved myself a fair bit of frustration by letting go of my foolish pride and just enjoying the ride. It's amazing how missing even one item can gum up the works. (Props to me: that's a witty zinger, since one of the items that eluded me longest was a piece of chewing gum players can find in one of the earliest environments.)

Other elements of the interface are less effectively implemented, unfortunately. That's especially true of the inventory management system. The player has to press a button to bring up the PiPhone, confirm with another press or two that they want to access inventory, move the cursor over the desired item, press a button to confirm, then press another one to put the item in Larry's hand so he can then apply it as needed. Or, he can attempt to combine it with other items in his inventory. That feels needlessly arduous. Even by the time I was approaching the end of the surprisingly long and hard (you know I had to go there) campaign, I sometimes found myself pressing the wrong button, or pausing to contemplate what buttons I needed to press to make that cucumber do my bidding. It's not super intuitive. 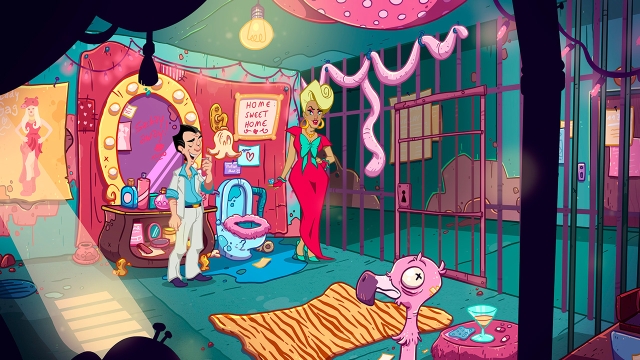 Before I wrap this review up, I probably should (reluctantly) go over a quick list of things some players might especially appreciate being warned about, this being 2019. If your politics and ideas tend heavily toward the conservative side, or if you're liberal and you don't see how any of the beliefs you hold dear might reasonably be mined for comedy, you may do well to give Larry a pass. This is not an adventure that's gracious to most extremes that don't involve dildos. The characters you're expected to get busy with are developed more than I anticipated, but at the end of the day, sex with a babe--just about any way he can get it--is Larry's stated goal. A pivotal sequence involves helping two men to admit their feelings for one another and explore a more meaningful relationship. There's a fairly random bit that dunks on Donald Trump. And the game's overall message seems to be that we're losing our humanity as we allow ourselves to become slaves to technology and its surrounding culture. If you click to try to use some items on the drag queen character--who clearly identifies as female and makes a lot of jokes about loving cavity searches--you will sometimes get a stock message that "He probably won't like that" (though elsewhere, the pronouns used do seem to fall in line with that character's identification). I can imagine any of those things offending one person or another. If the game had a higher profile, I just know angry articles and debates would blossom around those points of possible contention on a slow news day.

Hopefully by now, even if you didn't before, you know what's coming if you choose to play Leisure Suit Larry: Wet Dreams Don't Dry and you know if the highlights of the experience justify the offense you might take. Your purchase gets you the chance to reconnect with Larry Laffer, the somehow lovable loser with an unquenchable thirst for T&A. The world is bigger. The jokes have modern twists that lampoon new targets. The puzzles are sometimes devious and the freedom to progress as one sees fit can at times twist itself into a roadblock. Put that all together and what you get is probably the most satisfying take on Larry the world will ever see. It's not likely anyone's definition of perfect, but it'll still do the job in style.
4/5

If you enjoyed this Leisure Suit Larry: Wet Dreams Don't Dry review, you're encouraged to discuss it with the author and with other members of the site's community. If you don't already have an HonestGamers account, you can sign up for one in a snap. Thank you for reading!

© 1998-2020 HonestGamers
None of the material contained within this site may be reproduced in any conceivable fashion without permission from the author(s) of said material. This site is not sponsored or endorsed by Nintendo, Sega, Sony, Microsoft, or any other such party. Leisure Suit Larry: Wet Dreams Don't Dry is a registered trademark of its copyright holder. This site makes no claim to Leisure Suit Larry: Wet Dreams Don't Dry, its characters, screenshots, artwork, music, or any intellectual property contained within. Opinions expressed on this site do not necessarily represent the opinion of site staff or sponsors. Staff and freelance reviews are typically written based on time spent with a retail review copy or review key for the game that is provided by its publisher.