Imagine a first-person shooter where you execute zombies whilst chugging beer and cracking cheesy jokes. That sounds like an interactive experience along the lines of "Shaun of the Dead" or "Army of Darkness," doesn't it? I'm willing to bet you even heard Bruce Campbell's voice ripping clever quips in between savage blasts from his boomstick, or Simon Pegg muttering delightful throwback jokes with each thwack of his cricket bat. Unfortunately, that's not how the first-person shooter, Zombeer, actually plays out. Replace the aforementioned weapons with a glowing purple dildo, and swap out the zingers for phoned in comedy you can't even find in a straight-to-video "American Pie" film. That's the Zombeer I know and love at least don't hate.

It starts with an interesting premise, anyway: you're an infected college kid (named "K") trying to rescue your girlfriend during a zombie apocalypse. However, unlike the rest of the world, you have yet to transform into a ghoul because you're sloshed and alcohol staves off the effects of zombification. Luckily, there's a brand of beer called "Zombeer" that happens to be in vending machines all over campus, including at the library. So in addition to gunning down walkers, you must occasionally knock back cold ones to prevent your humanity from slipping away for good. Of course, you also have to mind your blood-alcohol level. Otherwise, you'll end up drinking yourself to death and reanimating as a flesh-eater. 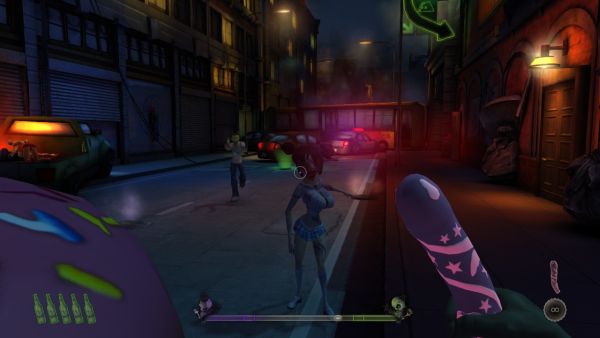 The notion of using beer as a survival mechanism might sound nifty on paper, but its implementation leaves much to be desired. Brews are plentiful and easily obtained, so it's not like this facet contributes much to the game's difficulty. More than anything, it provides an unnecessary and easily managed meter to babysit. Sadly, this defining feature comes off as a halfhearted attempt to add depth to a dated, lukewarm FPS, while providing it with a synthetic sense of "edginess." It would have worked better as a secondary element, rather than a major point of emphasis.

With each gulp, our hero either belts out a charming, beer-inspired pun, or says "Cheers" in various languages. At first, you might not even register that he's speaking, because his lines are such empty, meaningless chatter that they're easily ignored. However, there are only so many times you can hear "Prost!" or "Brew Beerymore!" or "It's a Brewish Holiday!" before K's incessant blather compromises your defenses and gets on your nerves. Bear in mind, you'll encounter this feature from beginning to end. Think about it now: Zombeer requires you to pound brewskis every twenty seconds or so, and each guzzle prompts an unfunny quote. With a campaign lasting over two hours, this design choice is akin to water torture.

As you do your best to ignore K's twaddle, the game barrages you with unnecessary pop culture references in a feeble attempt to improve its dismal element of hilarity. These allusions tend to crop up without either warning or context. For instance, you exit a ventilation duct on a roof and spot a talking dragon, a la Skyrim. Zombeer and The Elder Scrolls possess few common elements, so this reference's inclusion is not only forced, but baffling. At another point, you enter the grounds keeper's office and discover his name is Willie. On his office wall is an elaborate scheme to build a rifle and snipe people named after Simpsons characters. For once, the writers tried to give a hat-tip some context. Unfortunately, it's an amateur attempt at a joke with an awkward punchline. How is Groundskeeper Willie murdering the citizens of Springfield supposed to be funny? 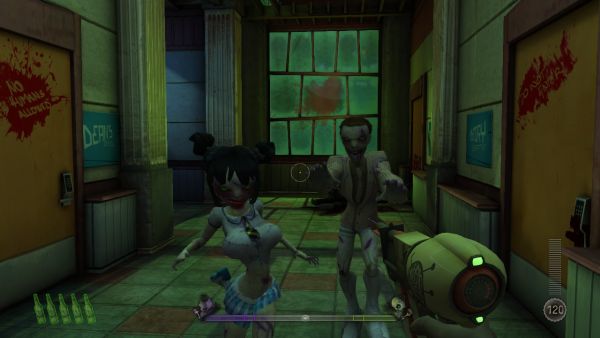 Zombeer seems to believe that arbitrarily dropping material from other IPs is inherently chuckle-worthy. Imagine if someone walked up to you and shouted a joke's punchline without delivering the setup, or yelled "Voltron!" for no apparent reason. That's what it's like to use blatant, out-of-context pop culture references as a source of humor.

Put aside its comedic components and Zombeer is a middling shooter at best. For starters, the game offers a yawn-worthy arsenal. In addition to the phallic bludgeon I spoken of earlier, you also get a nail gun, Zombeer grenades and an octopus-shaped firearm that's basically a shotgun. To make matters worse, the campaign mostly spams the same melee-based foes ad nauseam. They're nothing a few shells or easily-scored head shots can't handle.

Thankfully, you do run afoul of adversaries with special abilities that almost break the tedium. For example, screaming mimes make appearances, as well as dancing deadies who exude an aura that boosts your drunkenness. Unfortunately, these creatures spend most of the campaign warming a bench rather than infusing the game with a much needed boost in challenge factor. 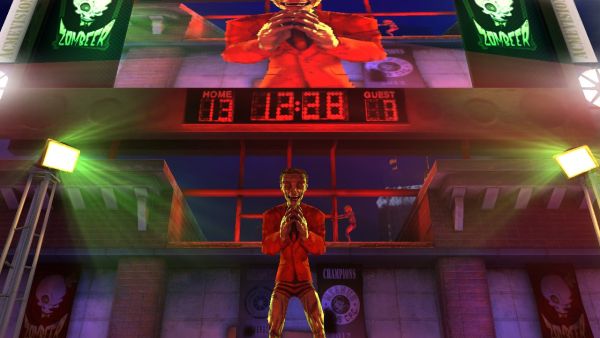 The only other thing a game with mostly tacked on features needs to pull off a hat trick is a few QTEs. Surprise, surprise, Zombeer contains a handful of them, including a boss battle that's not only a series of simple quick time events, but also a watered down arena segment. Honestly, I probably wouldn't have addressed the game's QTEs were it not for that boss encounter and one buggy section in particular. During this scene, K enters a library as a zombie spots him. Why he didn't just bust a cap in the creature's noggin is beyond me. K instead ends up trying to shut the library door on the creature, while a QTE commands you to press... Is that the letter "I"? Is it a number "1"? Regardless of which of the two keys you input, the game fails to respond and you die. I nearly gave up on Zombeer because of this scene, as I couldn't advance the storyline without completing it. I thought that maybe this was an unresolved glitch and decided to test out random keys. As it turns out, "D" was the correct response. D. Because that looks a lot like I.

Plenty of gamers have enjoyed Zombeer, likely because it plays to their sense of humor. I won't look down my nose at anyone who finds this game funny or entertaining, because comedy is subjective. However, I also can't give this game my stamp of approval. I found it to be a dull, draggy shooter that panders to nerds while failing to do anything meaningful. Think of it less as an equivalent to "Shaun of the Dead" and more as an interactive successor to "Scary Movie."
2/5

If you enjoyed this Zombeer review, you're encouraged to discuss it with the author and with other members of the site's community. If you don't already have an HonestGamers account, you can sign up for one in a snap. Thank you for reading!

© 1998-2020 HonestGamers
None of the material contained within this site may be reproduced in any conceivable fashion without permission from the author(s) of said material. This site is not sponsored or endorsed by Nintendo, Sega, Sony, Microsoft, or any other such party. Zombeer is a registered trademark of its copyright holder. This site makes no claim to Zombeer, its characters, screenshots, artwork, music, or any intellectual property contained within. Opinions expressed on this site do not necessarily represent the opinion of site staff or sponsors. Staff and freelance reviews are typically written based on time spent with a retail review copy or review key for the game that is provided by its publisher.