Ive been trying to figure out why The Walking Dead: Michonne is struggling to make much of an impression. I dont really know, I guess it could be a number of things. Maybe its down to the enforced brevity the spin-off has decided to foster, offering half the chapters a full season has boasted, with shorter episode running times besides. Maybe the burden of assumed knowledge is too heavy. Every other game has starred (mostly) unique characters, telling you only what it felt you needed to know about them as the titles progressed. Michonne has no such freedom; shes a large part of both the comic and the T.V. series, and youre expected to know this. The setting of the mini-series coincides with her disappearance during a few issues of the comics, exploring why she left and ultimately why she came back. Its a lot of existing knowledge to expect of your audience, but maybe thats not it either. Theres a sense of foreboding danger and impending loss that the other games were saturated in that simply does not exist here. Michonnes a survivor, a pre-established badarse roaming the zombie-filled wastelands fearlessly. The shambling army of the undead never feel that much of a threat to her. She can die, sure, but thats your fault for failing a QTE. Its not supposed to happen because such simple danger is irrelevant to her. Theres a clear disconnect present thats not been there before. Youre not overcoming obstacles; youre poking keys to advance the inevitable. 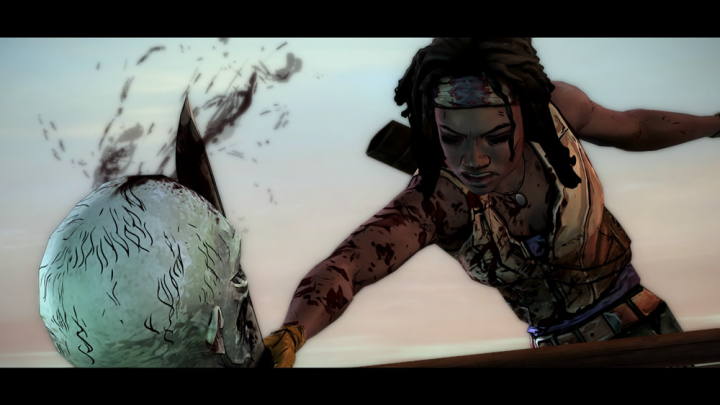 This could have been spun if you had something to protect, but Michonnes supporting cast are poorly fleshed out and difficult to care about. They fade in out out of proceedings, given only reason to exist when the plot feels it necessary. Theres no time offered to explore them as characters, so all thats really presented is an Us vs. Them aesthetic. The Them part of the equation do throw up some brief and shallow examples of existing within a shade of grey, but the main driving force behind them is so ham-fistedly moulded to be an antagonist its sometimes hard to take him seriously. I half expected to have a conversation with someone that started with Oh, that Randall! Off drowning kittens again, I wager! Or Hes unable to get to sleep each night unless he rubs glass shards in the eyes of orphans, that rogue!

Team Us dont fare a lot better. Theyre simply not given the time to be established as anything stronger than a brief list of attributes that youre supposed to bond with instantly. At one point, such a character offers to give himself up so that the rest of the party might survive and my initial reaction was to shrug and let him do it. Sure, why not? Another character makes the right noises towards becoming something of substance before hes killed off in the most bafflingly moronic way. Its forcefully injected to advance the plot in such a sloppy way that you can foresee it the second the stupid, stupid chain of events are put into place. 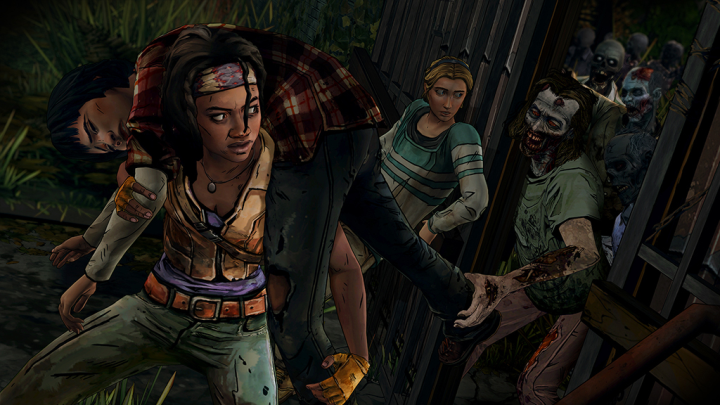 So the entire weight of expectancy falls on the shoulders of Michonne, a protagonist who needs prior knowledge to understand fully, someone with no reason to fear the shambling dead and someone with nothing of worth to protect. Much as the first chapter, the sporadic highlights are the moments when shes forced to battle her own leaking sanity. Awful moments of quiet lead her fumbling mind back into atrocities of the past she works hard not to relive, but remain an integral part of her, regardless. She sees things that cant be there. She recreates past scenarios long beyond her control. These unwanted bubbles of horrific memory bleed into the real world, torturing Michonne, plaguing her anew with waves of guilt and impotence. It makes her uniquely vulnerable. It shows that the reason shes so driven in the real world, so obsessed with ways to keep her mind busy. It reminds you that, without these distractions, shes right back to where you found her at the start of the first chapter. With a gun to her head, wanting it all to just be over.

But these moments are fleeting, even in a game of Give No Shelters brief running time. Its a lot to ask of the third and final chapter, to give substance to the previous entries when theyve offered so little to build upon. So add that to Telltale offering a new server to host game saves on that has the unfortunate side effect of crashing your game every fifteen minutes or so just to put the boot in. The upside is you can turn that off to enjoy a bug free couple of hours. Theres no such fix to elevate those couple of hours above mediocrity.

If you enjoyed this The Walking Dead: Michonne - Episode 2: Give No Shelter review, you're encouraged to discuss it with the author and with other members of the site's community. If you don't already have an HonestGamers account, you can sign up for one in a snap. Thank you for reading!

© 1998-2020 HonestGamers
None of the material contained within this site may be reproduced in any conceivable fashion without permission from the author(s) of said material. This site is not sponsored or endorsed by Nintendo, Sega, Sony, Microsoft, or any other such party. The Walking Dead: Michonne - Episode 2: Give No Shelter is a registered trademark of its copyright holder. This site makes no claim to The Walking Dead: Michonne - Episode 2: Give No Shelter, its characters, screenshots, artwork, music, or any intellectual property contained within. Opinions expressed on this site do not necessarily represent the opinion of site staff or sponsors. Staff and freelance reviews are typically written based on time spent with a retail review copy or review key for the game that is provided by its publisher.