Party Pigs: Farmyard Games takes a good idea--athletic pigs competing in sporting events while the other livestock watches on in approval--and fumbles it badly. The end result is a nearly complete disaster, partially saved only by solid artistic design and the vague notion that someone at Data Design Interactive probably wanted to make something wonderful. Its a shame the effort ultimately failed.

The games package promises seven games in one, and the menus suggest that there are a total of nine. The former number is closer to the reality, but still oversells the actual value here. The unique events offered are the 100M sprint, the 110M hurdles, the long jump, the high jump, the hammer toss, the javelin throw, the 100M swim, and the high dive. 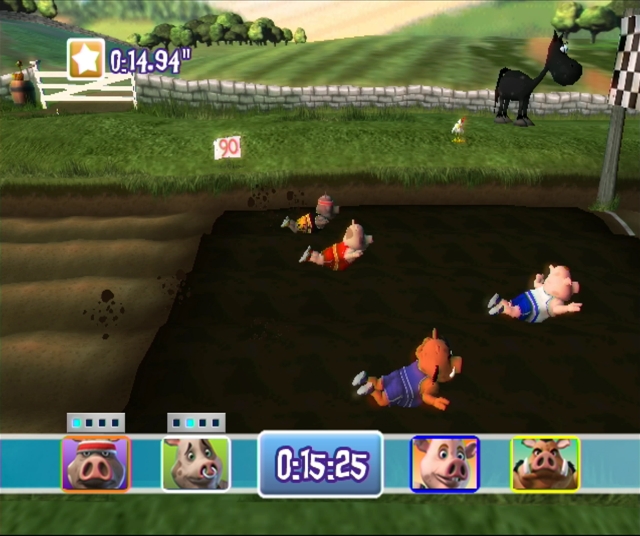 A number of the individual attractions are quite similar to one another, and none of them are more advanced than the typical mini-game you would encounter in something like Mario Party. In any event that requires running--the sprint, hurdles, high jump, long jump and others--you move the Wii Remote and Nunchuk up and down in an alternate pattern, as if your arms are trotting along a track. Then you press the A or B button when prompted. In the case of the hurdles, you must press one or the other of the two buttons at numerous points along the way, which is surprisingly difficult (and not a lot of fun) to do when youre also frantically waving the two pieces of the controller up and down and the cord between them is vengefully lashing at your chin.

Additional mini-games also require that same obnoxious movement. The javelin toss is really just a long sprint, followed by you adjusting the angle of the Wii Remote and pressing a button, so theres not a lot of extra variety there even if the on-screen animations are different. The 100M swim feels largely the same, only you periodically have to press A to catch a breath of air, and at one point you have to press the Z and B buttons simultaneously to perform a kick that will turn you around to swim back toward the starting line and sweet victory. 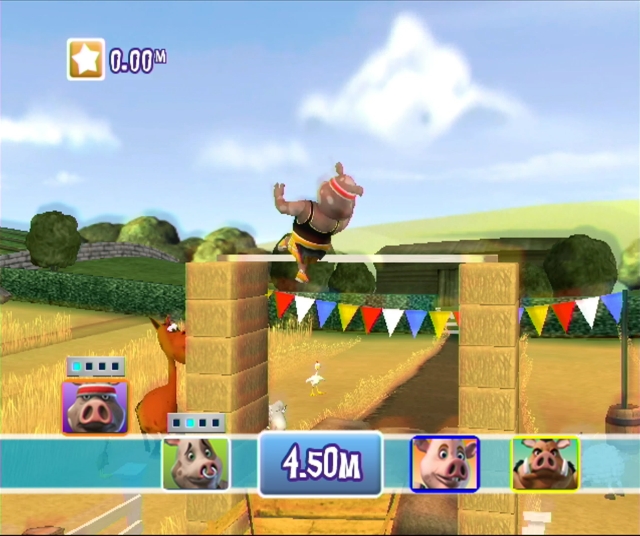 One event that controls slightly differently from the norm is the hammer toss, which instead has you hold your Wii Remote upright while holding the B button, and then move it in a circular motion to cause your pig to start spinning in circles. When you have done so for long enough, the camera changes perspective and you have to release the B button and swing the Wii Remote forward to signify that the hammer should be sent flying in an arc. The controls in-game can be just slightly vague, so its difficult to know exactly what youre expected to do unless youve read the manual.

The problem with each of the games is that theyre really very basic and dont require skill beyond the ability to swing your arms in repetitive motions a lot, which can quickly lead to sore limbs and even shortness of breath. The whole process grows tedious quite quickly.

Most games are initially locked, and divided into a few categories. If you play through the Group Games and Special Games, youll access additional options until theyre all available, though this isnt immediately evident from within the game. There are so few events to even experience that unlocking everything feels like a mere formality and shouldnt require more than a few minutes of effort. Tellingly, you might still find yourself tempted to stop playing before youve accessed everything, which is quite the feat for a game that offers so little unique content. 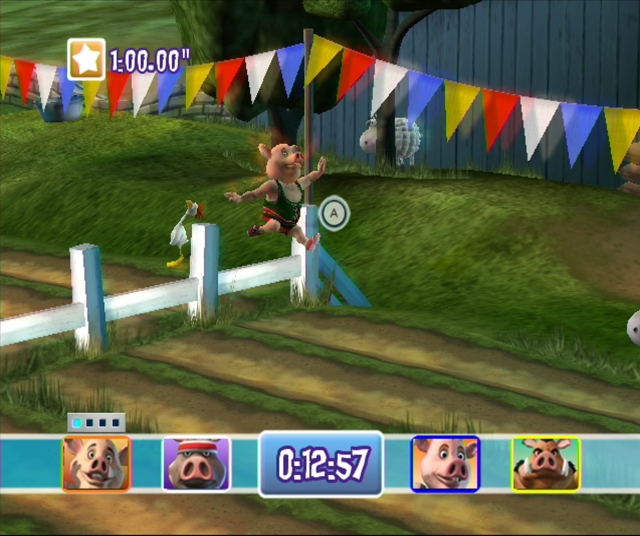 The one thing Party Pigs: Farmyard Pigs does nail, though, is presentation. Menus are bright and colorful, but the real treat is the farmyard environment. Its illustrated quite boldly, with adorable animals that seem genuinely interested in what the crazy pigs are doing. Meanwhile, the music that plays in the background is rousing enough to suit the crazy on-screen action. Theres room for a bit more personality here, perhaps, but the general sense is that the artists did excellent work that deserved to be part of a better game. Theres also an option to view their handiwork from the main menu, so thats nice.

Party Pigs: Farmyard Games probably could have been a neat title, in the hands of experienced developers with more time and a more generous budget. Youll find that the basis for a solid multi-player experience is certainly here, but the team didnt build on it properly. The end result is an extraordinarily shallow experience, one that doesnt last long enough to satisfy those who measure their enjoyment by hours of unique content, and one that probably lasts entirely too long for those who consider every minute a precious gift. Youngsters, meanwhile, will probably be more easily amused by a free app on their phone, leaving one to wonder just who is likely to find something to enjoy here. Pig aficionados, maybe?
1.5/5

If you enjoyed this Party Pigs: FarmYard Games review, you're encouraged to discuss it with the author and with other members of the site's community. If you don't already have an HonestGamers account, you can sign up for one in a snap. Thank you for reading!

© 1998-2020 HonestGamers
None of the material contained within this site may be reproduced in any conceivable fashion without permission from the author(s) of said material. This site is not sponsored or endorsed by Nintendo, Sega, Sony, Microsoft, or any other such party. Party Pigs: FarmYard Games is a registered trademark of its copyright holder. This site makes no claim to Party Pigs: FarmYard Games, its characters, screenshots, artwork, music, or any intellectual property contained within. Opinions expressed on this site do not necessarily represent the opinion of site staff or sponsors. Staff and freelance reviews are typically written based on time spent with a retail review copy or review key for the game that is provided by its publisher.