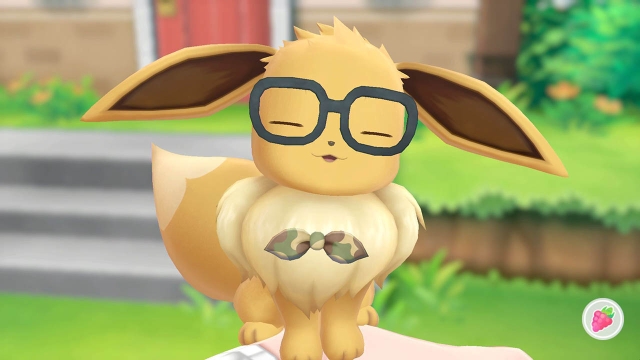 For the most part, you already know what you're getting with Pokemon: Let's Go, Eevee! It's the original Kanto-set adventure, remade and somewhat revamped. You're still a ten-year-old kid who embarks on a journey to catch all of the Pokemon, compete against other trainers in turn-based combat and become a hometown legend. The main difference this time is that Charmander, Bulbasaur and Squirtle take a bench during the opening act, allowing the spotlight to shine on the equally adorable Eevee.

Not only is Eevee your starter, but it's also a virtual companion. You can feed it, pet it, give it a high five and die from cuteness overload. Seriously, this is part of the reason I signed up.

That and the visual face lift this game received. It's great to see the Kanto region reimagined as a fully 3D environment, rather than a bland black-and-green mixture decked out with the occasional house, stream, tuft of grass or bush. This time, countrysides burst with bright light, pleasant scenery and a palette that really pops. Darker locales like Pokemon Mansion and the Saffron City Gym exude more atmosphere than before, balancing this rather lighthearted adventure.

However, as relaxing, gorgeous and wholesome as this title may be, it's still got plenty of frustrating hiccups...

If you remember the original "Generation One" games, you probably recall routes littered with amateur trainers waiting to take you on. These folks presented almost no challenge and were only fun to face for about the first few hours of play. After a while, slapping all of them around proved to be a dull, tedious task. In Eevee, you can avoid most of them, but that's not a necessarily a wise move. These competitors mainly exist to bump up your experience and drop items, and slipping past them can leave you under-leveled. Should that happen, you'll likely get trounced once you reach the next gym. 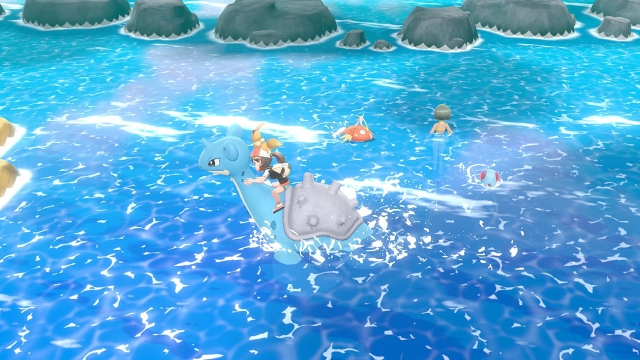 As it turns out, this Eevee is a capable fighter. It softens its foes with "tackle," critically damages them using "bite," and just levels them using "take down." As a result, pretty much any match that doesn't involve a boss, a legendary Pokemon or a gym leader ends in short order, and you take on hundreds of these nobodies to just stay properly leveled. Occasionally, the game might throw out a Pokemon Eevee can't handle, such as Onix or Machoke. Dealing with them isn't a hassle, though, because you can build a party of up to six Pokemon. All you need to do is include ones that can wreck Eevee's weaknesses and you're golden. Onix may seem tough against the titular combatant, but all it takes is a little flower like Bellsprout to drop it.

Believe me, the gym segments are worth the preparation because they're among the best portions of the campaign. Plus, the occasional special battle keeps you on your toes, like the ones against Team Rocket's leader Giovanni or the legendary super-boss Articuno. With these battles, there's pleny of dramatic build up, leading to a conflict where the opposition either obliterates you quickly or hits you with enough debuffs to force you to strategize and not just rely on "Bite-Take Down."

The capturing end of the experience thankfully provides a respite from the scores of tiresome, simple fights. As before, wild Pokemon emerge all over the place, just waiting for you to kidnap and Stockholm Syndrome them. This feature remains the most satisfying part of the campaign, as you collect, level up, evolve, trade or do whatever you want with the creatures you find. If you're like me, you'll lose hours just powering up some of your buddies so they transform into beefier, more wicked versions of themselves. 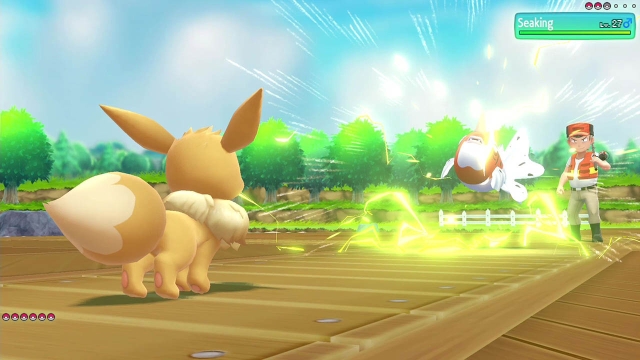 Though you still encounter Pokemon while roaming around, this remake does away with random scuffles. Instead, Pokemon appear on the main screen, and you collide with them to catch them. You no longer have to beat them senseless before lobbing Pokeballs at them, either. Instead, you enter a screen that's very similar to Pokemon GO's first-person encounter sequence. There, you use the Joy-Con's motion controls to throw a Pokeball, hoping to nail your target at just the right time to boost the chances of securing it. If you're playing in portable mode, you move the Switch itself around instead to aim and toss a ball with the A button.

Be warned: if you insist on using the Joy-Cons, then keep a stress bag or something handy because they love to screw you over. You see, Pokemon don't just hold still and wait for you to seize them. They move around, sometimes hopping to the left or right. In response, you need to swipe the motion controls in the corresponding direction, and therein lies the problem. Sometimes, you swing left and your ball flies forward and misses by a mile. Other times, you execute a proper forward throw, and your ball sails way over your target's head. Granted, these misinterpretations don't occur often, but they still happen regularly enough to make you scream obscenities as cartoony characters.

Before long, you begin to wonder when you can link up with your GO account. After all, that is one of this title's selling points. Sadly, you can't do so until you reach Fuchsia City (about two-thirds of the way through), where Go Park replaces Safari Zone from the original. There, you can transfer any Kanto Pokemon you've caught in GO, thus earning you a Mysterious Box that allows you to secure the "new" mythical Pokemon, Meltan. However, any Pokemon you transfer to Eevee! cannot go back to the mobile app, so you need to be absolutely sure you're prepared to send them. 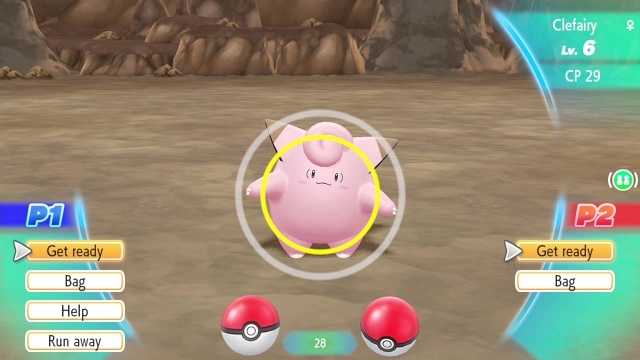 The biggest letdown of all is that in order to complete this entry's Pokedex, you need to spend an additional $30 on the "Pokeball Plus" peripheral. Otherwise, you won't be able to obtain Mew without save hacking. Call me a miser, but that decision is ridiculous. If you had no plans to pick up Pokeball Plus, you're now stuck with the dilemma of either wasting money on something you don't want or forgoing Mew altogether. I know this franchise is just a means of generating merchandise that accrues piles of cash, but this the most poorly disguised shakedown I've seen the come from the brand.

Ultimately, though, Let's Go, Eevee! is a decent distraction from everyday life, but one that isn't without flaws. If Game Freak intends to remake other generations using this style, they'll need to fine tune some of their features. Personally, I say ditch the GO-like capture system, introduce an adjustable difficulty rating and to hell with that Pokeball Plus nonsense. I shouldn't have to spend additional money just to get one damn Dex entry. Let's hope that Let's Go, Marill! or whatever it's going to be called improves on those missteps while maintaining Eevee!'s high points.

If you enjoyed this Pokémon: Let's Go, Eevee! review, you're encouraged to discuss it with the author and with other members of the site's community. If you don't already have an HonestGamers account, you can sign up for one in a snap. Thank you for reading!

© 1998-2020 HonestGamers
None of the material contained within this site may be reproduced in any conceivable fashion without permission from the author(s) of said material. This site is not sponsored or endorsed by Nintendo, Sega, Sony, Microsoft, or any other such party. Pokémon: Let's Go, Eevee! is a registered trademark of its copyright holder. This site makes no claim to Pokémon: Let's Go, Eevee!, its characters, screenshots, artwork, music, or any intellectual property contained within. Opinions expressed on this site do not necessarily represent the opinion of site staff or sponsors. Staff and freelance reviews are typically written based on time spent with a retail review copy or review key for the game that is provided by its publisher.