Yomawari: Night Alone is creeping horror done right. Rarely, if ever, will you find yourself overly disturbed by some perverse grotesquery or suffer a cheap jump scare at something lurching suddenly out of the shadows. Its different; more subtle. Instead of being in your face the entire time, Yomawari specialises at putting you in a constant state of unease. Of exploring a twisted world dressed up in normality, but, at the same time, being completely wrong on almost every level.

Some of that resonates due to how hard it fosters a sense of protectiveness between you, the player, and the unnamed little girl who serves protagonist. Shes adorable, resplendent in her pastel-shaded pixels, armed with her floppy hair bow and cute rabbit backpack. Forced to explore her town at night to track down her missing dog and the older sister who went searching ahead of her, she shares the streets with things that have no real right to exist. Sometimes, these are purposefully simplistic monstrosities, depicted in a rough caricature of a childs drawing. Poorly-sketched hanged men float about the streets, rushing towards the girl only should they catch sight of her. She cant fight back and shes not sturdy enough to withstand any kind of attack. If shes caught, she dies. 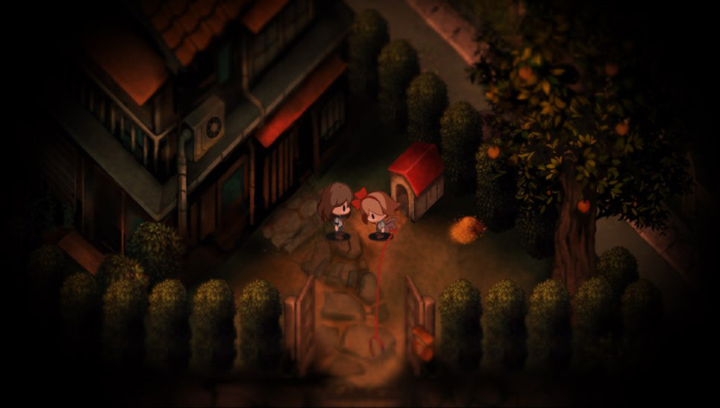 Her only real defence is to either sneak through the monsters undetected or to run away once spotted and hide. Theres things like bushes and signs dotted generously around the town that she can cower behind, giving her complete safety but plunging the outside world into comprehensive darkness. Aside from a red blip mapping out the rough location of the threat that flickers in time with her thudding heartbeat. Its creepy, but its still perfectly safe (so long as you dont emerge until the threats wandered off); the real challenge is getting there. The girl can sustain short bursts of speed to try and get away, but her already lacking stamina is further depleted depending on her fear level, which is measured by the intensity of her heartbeat.

Yomawari knows that these obstacles are prone to provide plenty of deaths as youre forced to learn each monsters quirks through trial and error. Some work purely through line of sight, while others hunt by sound alone, making a tip-toeing girl invisible. Some are stationary until disturbed by a light source, while others show no signs of even seeing the small girl slink around in the shadows, but still offer a game over screen should their sporadic, unpredictable movement patterns so much as graze her. These monsters and their placement provide a lot of the games most devious puzzles as you try and find a way past them while staying alive, so its to Yomawaris credit that these numerous deaths are not harshly punished. Any items you obtain stay in your inventory, relieving you from dying at the same point over and over while you try and obtain a trickily placed object. The towns also littered with jino shrines which serve as save points so long as you leave a small offering. This is rarely an issue thanks to the numerous coins you can constantly find laying around.

The shrines also serve as quick-travel points which is a godsend seeing how exploration heavy Yomawari is. Your objectives are always purposefully vague, offering you goals as nebulous as Find Sis and then leaving you to roam about the town in an attempt to achieve them. Theres no guide mark or compass pointer telling you which way youre supposed to go, so youre left to stumble around, literally in the dark, armed only with a flashlight in a town filled with walking nightmares who want to kill you. Youll often discover items to help you on your path; early on you can examine little burial mounds youll need a shovel to dig up, and the girl will remark theres probably one in the sandpit. Or you can occasionally stumble upon an item belonging to your sister that might suggest youre on the right track. Something innocent and not at all ominous, like one of her shoes discovered in a partially dug ditch. 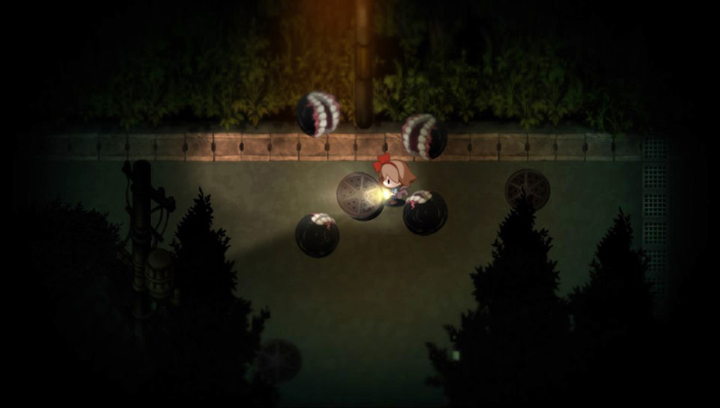 The purposefully minimalistic design of Yomawari: Night Alone forces you to focus in on things you might otherwise miss. Theres no real music backing the game, so you instead have a soundtrack of echoing footsteps, chirping nocturnal insects and the sound of the girls thudding heart. It means you can pick up on little noises that you might otherwise miss. It also means those noises exist for a reason. That scream that sounds like broken glass? The brave or the foolhardy can try and track it down. Maybe theyll never find its source. Or maybe theyll pass a house at exactly the wrong time and see the pale features of a distressed infant scroll across its windows. Those crayon-like drawn figures that just stand motionless in the street creep you out? Just wait until you pass them and hear shrill childish laughter. Dare look behind you? Theyve grown fangs and are suddenly right on your tail.

And so you forge on into the town, because theres nothing else you can do. You collect pebbles to throw into corners in the hopes of distracting floating eyes that morph into balls of chomping death when they spot you and you hope you can free yourself from the tendril-like grip of the inky blank hand thats snaked out of a sewer lid before the ghouls close in. Theres little to prepare you for the cavalcade of macabre secrets the town holds, and that any form of reason is in equal parts unexplained and lost somewhat in translation only adds to its unwholesome vibe. The girls evil town exists; it doesnt need you to understand its origins or why theres a burning corpse chilling behind the incinerator; these thing occur regardless of your understanding.
4/5

If you enjoyed this Yomawari: Night Alone review, you're encouraged to discuss it with the author and with other members of the site's community. If you don't already have an HonestGamers account, you can sign up for one in a snap. Thank you for reading!

© 1998-2021 HonestGamers
None of the material contained within this site may be reproduced in any conceivable fashion without permission from the author(s) of said material. This site is not sponsored or endorsed by Nintendo, Sega, Sony, Microsoft, or any other such party. Yomawari: Night Alone is a registered trademark of its copyright holder. This site makes no claim to Yomawari: Night Alone, its characters, screenshots, artwork, music, or any intellectual property contained within. Opinions expressed on this site do not necessarily represent the opinion of site staff or sponsors. Staff and freelance reviews are typically written based on time spent with a retail review copy or review key for the game that is provided by its publisher.