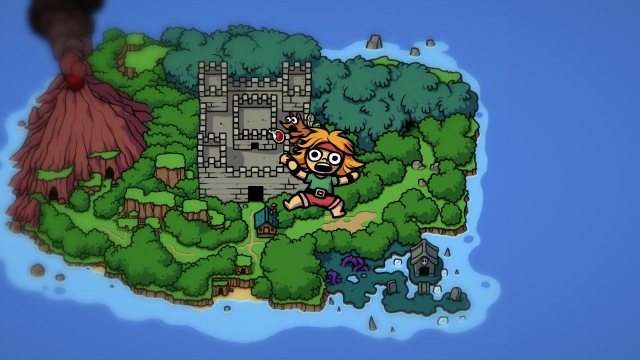 I can't put my finger on anything I particularly disliked about the Zelda clone Ittle Dew. And yet, I still came away from the experience thinking it was "alright, I guess." It didn't leave me doing a jig or running to a digital platform to pick up its sequel right away, and yet I admit that it was a charming enough title that I could give it a slacker's thumbs up.

At first, I wasn't in love with its presentation. The opening cutscene resembled a Newgrounds video spoofing Link's Awakening, except sharper. Over time, though, I grew to appreciate the hand-drawn visuals, as they added spunk and color to the quest. Plus, some of the game's jokes wouldn't have landed as effectively as they did without this art style. Most of the humor is pretty ridiculous and smacks of "Adventure Time," and just wouldn't work without the wobbly, internet cartoon art.

Of course, most of these gags take shots at the Zelda franchise, where enemies and set pieces from that brand reappear in ludicrous form. For instance, shield-devouring Like Likes return in this adventure, now transformed into mobile piles of pancakes covered in maple syrup. The usual palace guards also make an appearance, except this time they're all named "Jenny" and they don various animal suits. Don't ask me why. Hell, even the weird statues from the dungeon entrances of the original Zelda pop up, only this time one of them looks like a crazed donkey and the other appears to be a buck-toothed elf sporting the worst mullet-hawk you've ever seen. 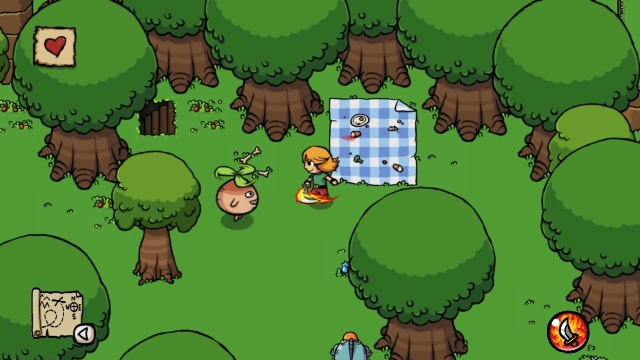 At first, these cameos are cute and fascinating. However, there are only so many times you can point at the screen and say, "Oh, yeah! Like Zelda, right?" Before long, these references become somewhat predictable and lose their edge, though they don't grow outright bothersome. At best, I can say developer Ludosity thankfully didn't go the "let's reference every retro game" route. Because let's face it: that kind of content is getting old, much like the titles to which they pay homage.

Thankfully, Ittle doesn't ape its inspiration to a T. You don't control a hero that prophecies say will rescue a princess from a power-hungry sorcerer, or anything like that. Rather, you play a standard adventurer stuck on an island, who discovers that a shopkeeper offers the only way off in the form of a hand-crafted raft. However, he'll only give you this item if you storm a nearby castle and steal an artifact from it. Unfortunately, that treasure sits behind a maze of puzzles, and some require special equipment to complete. Hey, you know who has special items that look like they could solve puzzles? The aforementioned merchant... How convenient!

In order to procure those goodies, you first need to scour the castle for chests filled with money, because none of the creatures or obstacles drop coins. Thankfully, you don't need to rack your mind much over how you're going to earn that dough, because the game only provides enough cash to purchase those goods. At least you know you won't be tediously grinding for that moolah. 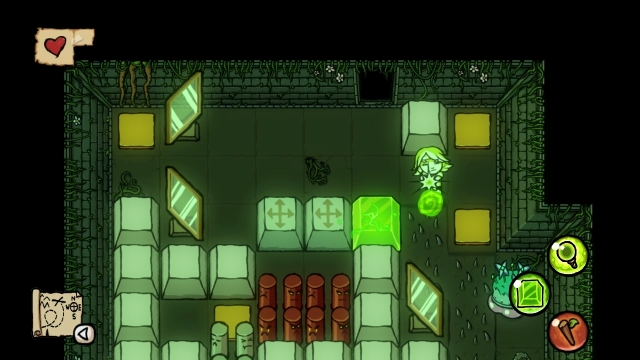 When you buy one of the items, the shopkeeper informs you that he doesn't actually have it, and thus sends you via springboard to a remote dungeon that holds it. There, you perform most of the expected tasks: solve puzzles, scotch enemies, locate the new treasure, use it to get past advanced challenges and eventually fight a boss not unlike those faced in Nintendo's action-adventure series.

At first, it's neat to experience these tropes in a new, cartoony form. The game succeeds early on at being a pleasant, nostalgic stroll that reminds you of stages you played through in older titles. The puzzles early on prove to be hit or miss, with some of them coming off as simple filler, while others actually force you to think and experiment.

However, as you advance through the campaign, these riddles evolve into more savage, thought-provoking and engaging beasts. A lot of them are of the push-block variety, but later ones blend multiple types of puzzles together. For instance, you might need to push some bricks at first, then use a wand to teleport a couple of items, but ultimately you'll have to figure out how to kill all of the enemies in that particular room. A few of them even require you to light a bomb, freeze it and slide it across a room. After it thaws mere seconds later, it explodes and destroys a few cracked stones. After that, you can expect some switch throwing and enemy killing, all before creating a magical brick so you can activate a pressure plate that opens a door. And that's one of the moderate-level trials. 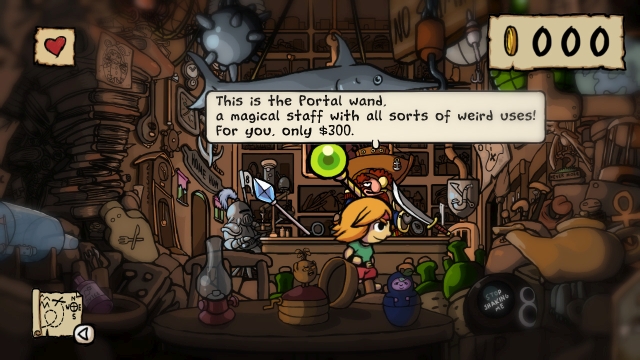 There's a reason I've mostly gabbed about puzzles and not so much about other Zelda trademarks. You see, puzzles comprise a vast portion of the material on offer here. It's almost not fair to compare this game to its inspiration, because this title is more of a puzzle-adventure game with a little action thrown in for good measure. I'm not being hyperbolic when I say puzzles appear just about everywhere you go. You can only deviate from the rail a few times, and you face a puzzle every time you do. Sometimes, you earn a life-extending item for completing them, but more often you find a collectible card that has no effect on play.

And this is where I got burned out. The rigmarole of constantly completing puzzles grew tiresome, and the only respites I received were the occasional room full of enemies. There were few mini-games, exploration was minimal and the few side quests that cropped up only led to more puzzles. The charm that came with the art style and the cute humor wasn't enough to prevent the experience from souring a little. This is not to say I didn't enjoy it, because I certainly did. It just overstayed its welcome with me before I completed it.

For some folks, a game like this could be heavenly. I'll admit, I like puzzles in my adventure products, but I also appreciate other challenges that help cleanse my palate. Ittle Dew provides you with a lot of brain-benders, plus a generous helping of animated cuteness, but not much else. It's a decent little indie excursion, but one that could've been great with more variety.
3.5/5

If you enjoyed this Ittle Dew review, you're encouraged to discuss it with the author and with other members of the site's community. If you don't already have an HonestGamers account, you can sign up for one in a snap. Thank you for reading!

© 1998-2021 HonestGamers
None of the material contained within this site may be reproduced in any conceivable fashion without permission from the author(s) of said material. This site is not sponsored or endorsed by Nintendo, Sega, Sony, Microsoft, or any other such party. Ittle Dew is a registered trademark of its copyright holder. This site makes no claim to Ittle Dew, its characters, screenshots, artwork, music, or any intellectual property contained within. Opinions expressed on this site do not necessarily represent the opinion of site staff or sponsors. Staff and freelance reviews are typically written based on time spent with a retail review copy or review key for the game that is provided by its publisher.