A macabre string of murders plague the city of New Orleans. Bodies found gruesomely peeled asunder, ribcages cracked open and hearts removed. The police are stumped, eager to blame the spree on the citys dark underbelly and almost desperate to relegate the eldritch tracings around each corpse as elaborate red herrings. The killers, they theorise, are trying too hard to make these look like voodoo sacrifices. Its probably turf warfare, and who cares if a bunch of professional thugs off each other in manners most gruesome?

In this case, Gabriel Knight does. Not out of some sense of noble duty or righteous anger, but because hes the owner of a failing bookstore doubling up as a failing author, and hes desperate for new material. His childhood friend is the lead detective on the case, and Knights certainly not above manipulating the few associates he has in order to better his personal circumstances. Hell stomp around crime scenes, looking for inspiration, or occasionally borrowing evidence to better understand the situation. Hes not coming off as an archetypal heroic protagonist is he?

Maybe thats a a little unfair, but in spite of his name, Gabriels no angel. Hidden behind his lazy southern drawl lurks no small measure of sleaze. The most foot traffic his forgotten bookstore sees is of a female persuasion, and they often bypass the easy reading sections and hotfoot directly to his bedroom out back. Early on, he visits the shores of a local lake in a setting that might be described as picturesque if not for the dismembered body nearby. He soon forgets his ill-deserved access to an area closed off from the public and whatever gains he may make by his questionable association as soon as a passing limo pulls over to make enquiries. He labels the passenger the most attractive woman he has ever seen and, for the time being at least, his investigations are entirely refocused elsewhere. 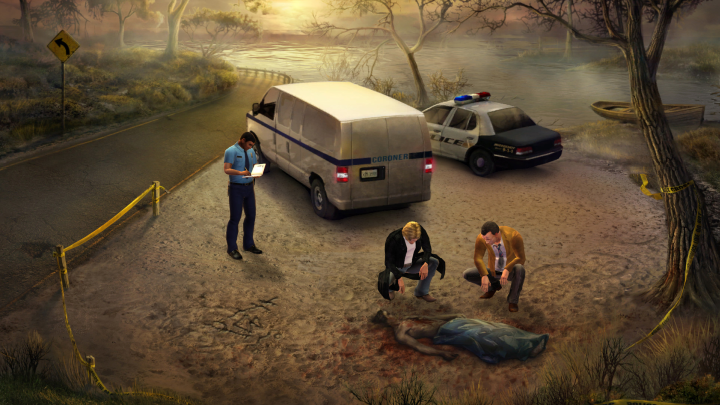 Spare a thought for Detective Mosley, forced to suffer Knight through an oft-tested sense of loyalty (and the dangled carrot of a juicy part in the crimes novelisation someday), but spare a couple for Grace Nakamura. Forced to fail at being the common sense behind Knights egotistical snooping, she gets to sit in his empty bookstore all day, selling nothing and staying alert for when Gabriel skips up the store ladder to peek down her top for the nineteenth time. If Gabriel gets by on smarmy charm and cult of personality, its often built upon hard fact engineered by Graces research. Shes the wary caution behind his puppy dog enthusiasm.

Entirely warranted caution. Gabriel starts off with no intention of playing the vigilante detective; nibbling out little titbits of information purely in the hopes of finally writing a book interesting enough that people might buy it. He visits voodoo museums, attends lectures, piecing together the inklings of a horrific tale dismissed by the city. Soon, whatever material gains he hopes to harvest are replaced by morbid fascination which, in turn, becomes a deeply personal quest, forcing him to question the meaning of his own forgotten bloodline.

This was all true in 1993, when the game was originally released, and still is today. It debuted right at the end of the adventure gaming boom but still managed to be a critical and commercial success, and if retro snobbery is your jam, you can still play it now in all its pixel-painted finery. Still, its a creature of its era, and it does suffer from some hang-ups, such as dumb icon interface, which demands your offer manual pretext to both your pointing and clicking. Theres a panel atop the screen offering you all kinds of exciting actions such as LOOK, ASK and WALK, meaning if you want to LOOK at something, ASK someone a question or WALK somewhere, you need to fiddle about with your options. Sometimes, it seems a particular irritant  why does ASK and TALK need their own distinct options, for example? Usually I would have no other choice than to try and talk this up as a product of the games times, and a bloody good job Id do of it, too. But then in 2013, the entire game got remade from the ground up. For better and for worse. 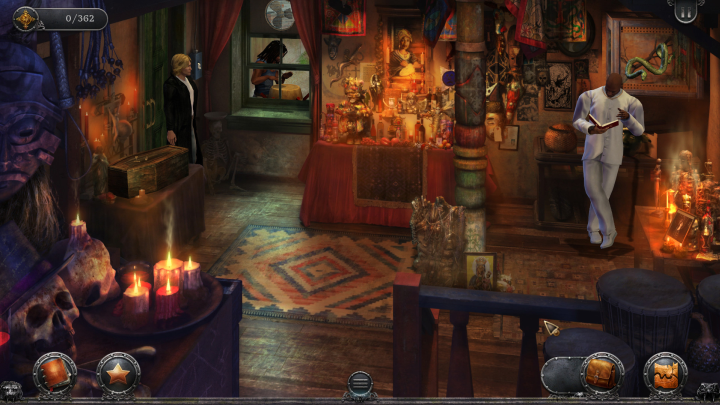 Im not going to pretend I miss the dumb icon system, even though my tireless patronage of it over the years has left me mostly numb. The Anniversary editions interface is infinitely cleaner, requiring no sub menus and just plain old clicking. Not having to constantly click out of the game and then back in again every time you need to even slightly alter your intent makes the remake a much smoother ride. Also, even though it goes to great pains to keep the fantastic voodoo-inspired horror tale intact, it does shuffle the retelling around a little. For the better, I think. Both games are cut into days (ten in total) which act like chapter bookends for the most part. In the original, there was a greater sense of making the first few days very top heavy and bloated. Lead writer, Jane Jensen, jumped at the chance to respec these, making each day feel as important and around the same length as each other. Some might suggest this was with a never-implemented episodic release schedule in mind, but those people are cynics and should be ignored.

The graphical refurbishment may alienate pixel perfectionists, but is a perfectly functional modern overhaul. Where the remake does falter is in the vocal cast, where they never stood a chance. The original game boasted the talents of Tim Curry, Mark Hamill, Jim Cumming, Leah Remini and Michael Dorn; the anniversary edition doesnt. Its not bad by any definition, but replacing Curry is only ever going to be a downgrade. With all this in mind, you could perhaps argue for the worth of such an already outstanding games need for a complete remake, but I dont think presenting it in a few new coats of finery to try and appeal to a new audience is a bad thing. Sins of the Father loses few of its previous strengths, but is a mechanically leaner videogame. It maintains what made it stand out over twenty years ago  pitting low-key sexual predators against underground voodoo cults. But its also a tale of personal growth; of watching Knight have to start giving a damn about something other than himself and find his place in the world after years of casual drifting. Maybe the newfound responsibility will change him. Maybe not.

If you enjoyed this Gabriel Knight: Sins of the Fathers 20th Anniversary Edition review, you're encouraged to discuss it with the author and with other members of the site's community. If you don't already have an HonestGamers account, you can sign up for one in a snap. Thank you for reading!

© 1998-2021 HonestGamers
None of the material contained within this site may be reproduced in any conceivable fashion without permission from the author(s) of said material. This site is not sponsored or endorsed by Nintendo, Sega, Sony, Microsoft, or any other such party. Gabriel Knight: Sins of the Fathers 20th Anniversary Edition is a registered trademark of its copyright holder. This site makes no claim to Gabriel Knight: Sins of the Fathers 20th Anniversary Edition, its characters, screenshots, artwork, music, or any intellectual property contained within. Opinions expressed on this site do not necessarily represent the opinion of site staff or sponsors. Staff and freelance reviews are typically written based on time spent with a retail review copy or review key for the game that is provided by its publisher.