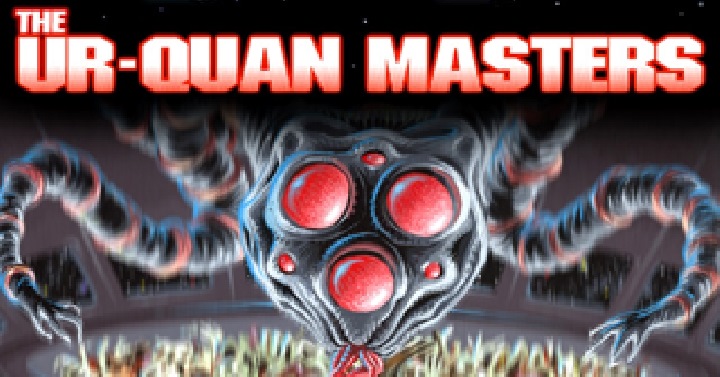 The Ur-Quan Masters is a 2002 open-source port of the science fiction action adventure game Star Control 2: The Ur-Quan Masters, which was released back in 1992. Aside from the fact that the words "Star Control" have been chopped off due to legal reasons (that trademark is still jealously possessed by Atari at the time of this writing), it has also been updated to operate on modern hardware, and has the added benefit of being completely free to play. However, before I discuss the features of the port and why it's awesome, let me give you an overview of the original game itself.

Set about a century from now, a despotic race of squid-like creatures called the Ur-Quan decide to migrate into the milky way and systematically enslave or conquer every sentient race they can find. The only thing stopping them is the Chenjesu, a race of noble silicon-based life forms who don't like the idea of enslavement and decide to fight back. They recruit as many peace-loving races as they can find, forge them into "The Alliance of Free Stars," and proceed to wage decades of bloody war against the Ur-Quan. Humanity eventually becomes included in the Alliance as a rather minor member, but by then it is practically too late. It becomes clear that the Ur-Quan possess superior technology and tactics, and the Alliance slowly starts to lose. 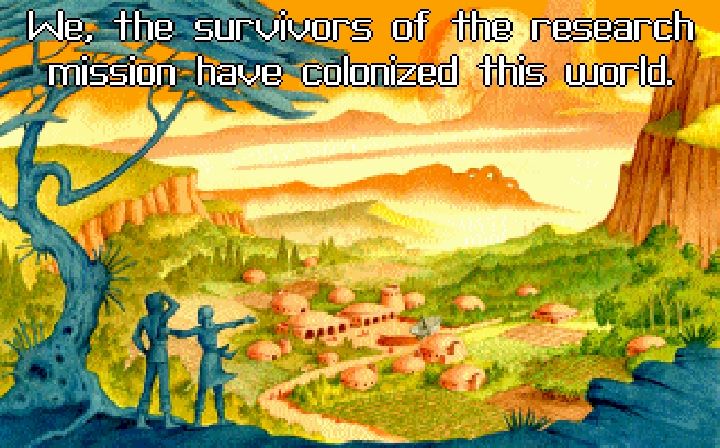 They fight until the very end, however, and that's where your character comes into play. As the captain of a deep space exploration mission, you become stranded on an alien world after you lose contact with Earth. Fortunately for you, this particular planet happens to have an ancient alien factory that is used for building starships, and after 20 years of hard work and research, your crew manages to scrabble together a big (but poorly equipped) ship capable of returning to Earth in hopes of finding out what the hell happened.

You soon discover that Earth is locked behind a giant, red, pulsating "slave shield," and that most of the Alliance has been similarly confined in the same manner. This is where the game begins. Alone in a largely unfriendly galaxy, it falls to you to somehow build a fleet and take vengeance on the Ur-Quan for what they've done. If you're lucky, you might even restore peace to the galaxy in the process. Sounds trite? Perhaps so. But the execution of this game is so much more than that, and the story has so many twists and turns that it is almost impossible to know what's coming next. 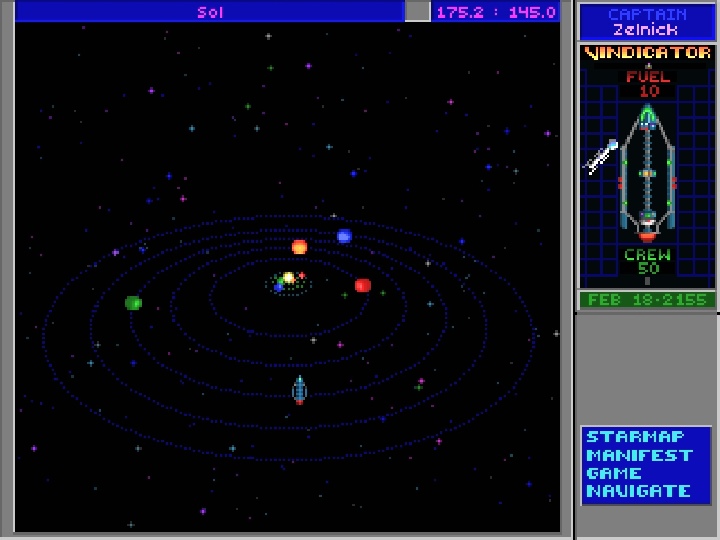 As for the gameplay itself, a large part of it is spent exploring star systems, whereby you will search for resources to support your upstart rebellion against the Ur-Quan. You will also quickly notice that not all is what it seems in the galaxy; the Ur-Quan presence seems rather thin, as though they are distracted by some larger, more ominous presence elsewhere. Nevertheless, this calm before the storm gives you plenty of time to explore, collect, harvest, build up your fleet, and eventually make contact with other races to find out what exactly is going on in this dystopian galaxy.

You will find that every single alien race you encounter (and there are at least twenty) are faithfully represented as truly unique organisms. This isn't some "light" sci-fi like Star Trek, where every alien race is basically just a variant of a human with slightly different cultural values. No, sometimes the aliens in this game are so far from normal that it takes some real problem solving to figure out how to deal with them. Every race has its own unique culture, motivation, and speech patterns, and it's up to you to figure out which of them you can trust and which you can't. Some alien races are just plain bastards, while others are friendly but really fucking bizarre. Notable examples include the Spathi, who are good-natured but compulsively paranoid; the Orz, who love to "dance" (and by "dance", they mean engage in deadly combat); and the Utwig, who have a sort of collective terminal depression and are obsessed with the notion of mass suicide.

Some of these races will help you progress the main story, while other races are simply there to provide optional threads and objectives. It is also possible to deal with these races in a variety of ways, whether as a tactful diplomat or a domineering aggressor. Choose wisely, however, as your actions will directly affect the galaxy in some startlingly permanent fashions. It is even possible for an entire species to be wiped out if you make the wrong (or right) choice. All of this stuff is presented with an incredible level of depth, about on the level that a professional science fiction writer might produce.

I know I'm praising the game's writing a lot, but I should also mention its other fine qualities, such as its music. The excellent .MOD tracks are just as diverse as its cast of alien races, and many of the tracks will easily stick in your head. I still keep tracks from this game on my hard drive to this very day and listen to them every once in a while because they're just that good. 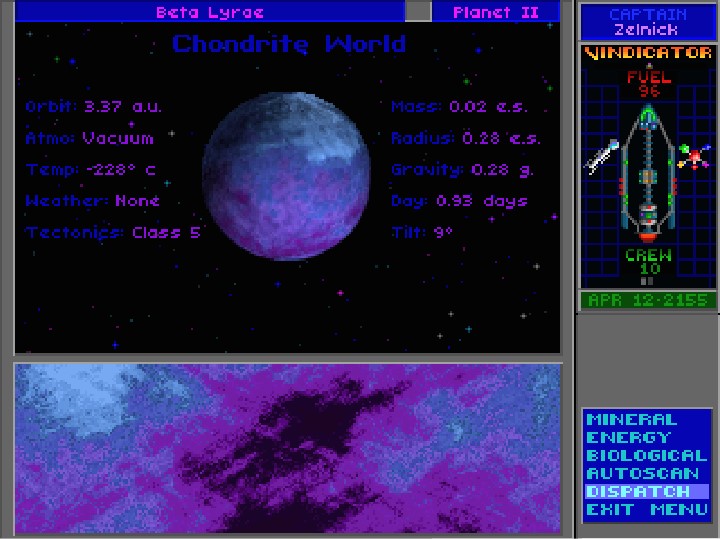 As far as the graphics go, I wll admit that they are dated, but they were top-notch for their time, and they're still absolutely serviceable today. The hand-painted race portraits are amazing, the unique planets are beautiful, and the action-packed combat sequences are sleek and well-animated.

Speaking of which, the combat system is also excellent, although it is presented in a somewhat strange fashion by today's standards. Ships battle each other one-on-one in duels, and if an encounter involves multiple ships, each combat is resolved individually until there is a result of victory, or not. These space battles feel sort of like "Street Fighter" in space, where every ship is like a unique "character" with its own attacks and moves. There's also a little bit of rock-paper-scissors here, as certain ships are usually better equipped to face off against others. It may sound simplistic and silly, but believe me, it's not. There's enough tactical depth and white-knuckle skills required here to challenge even the hardiest gamer.

There is also a local multiplayer mode that allows you to build a custom fleet of your own and face off against a friend, a mode that I remember spending countless hours playing with my friends when I was younger. It's an absolute blast. 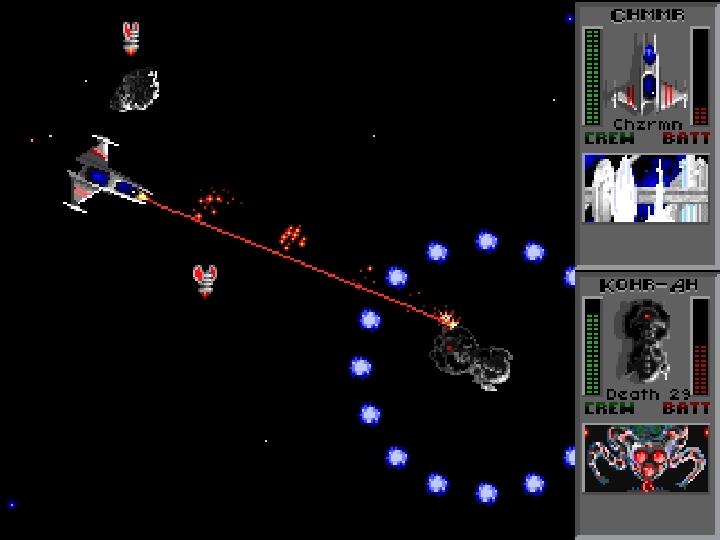 Now for some comments about the port itself. The Ur-Quan Masters contains the entirety of the original PC release along with all of the modifications that were added in the 1993 3DO release. The 3DO additions include animated cut scenes, full voice acting, and different UI options. Some of this stuff is hit and miss (particularly the voice acting), but all of it is toggleable in menus, allowing you to pick and choose which specific features you want to play with. Personally, I prefer to set these options as close to the original PC release as possible, but it's all up to you. It also includes modern remixes of the music tracks that were not available in either of the original versions. They are quite good, although they won't give you the same 90's nostalgia that the original tracks will.

Such a fully-featured labour of love doesn't come around very often, but it's fitting that it happened to Star Control 2. Out of all the PC games out there, it is definitely a title that deserves to be preserved, updated, and brought forward into the future. It holds up remarkably well even today, and still ranks as one of my top five games of all time. I have never played another game like it, and I don't imagine I will ever play another one like it ever again. If you've never heard of this game before, you owe it to yourself to try it at least once in your lifetime. It's free - You have nothing to lose.
5/5

If you enjoyed this Ur-Quan Masters HD review, you're encouraged to discuss it with the author and with other members of the site's community. If you don't already have an HonestGamers account, you can sign up for one in a snap. Thank you for reading!

© 1998-2021 HonestGamers
None of the material contained within this site may be reproduced in any conceivable fashion without permission from the author(s) of said material. This site is not sponsored or endorsed by Nintendo, Sega, Sony, Microsoft, or any other such party. Ur-Quan Masters HD is a registered trademark of its copyright holder. This site makes no claim to Ur-Quan Masters HD , its characters, screenshots, artwork, music, or any intellectual property contained within. Opinions expressed on this site do not necessarily represent the opinion of site staff or sponsors. Staff and freelance reviews are typically written based on time spent with a retail review copy or review key for the game that is provided by its publisher.