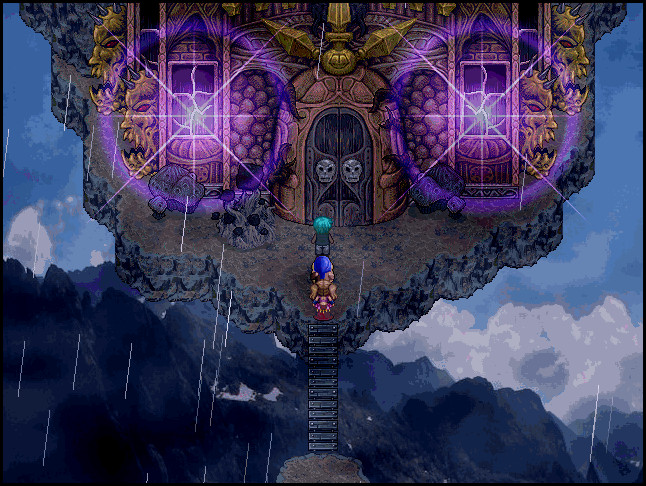 Asguaard is your average turn-based RPG. That announcement should come as either great or disappointing news, depending upon what you're looking for in your faux-Japanese fantasy material. As expected, you assume the role of a teenage boy, venture through a fantastical landscape along with a dwarf, a unicorn, and a girl who's obviously your love interest; and stave off the forces of darkness with the power of friendship. However, there's one huge difference here: you aren't playing the usual, spunky, over-eager adventurer that usually pops up in titles like this...

Let's face it: if any of us were to jump into our favorite pieces of media, we wouldn't be the badass characters we think we'd be. None of us turn out to be the master survivor during a zombie apocalypse or the spaceship captain who effortlessly outmaneuvers an alien battleship. In fact, we'd more likely end up one of the millions of zombies roaming the country or dead among the floating debris in space. The same can be said for the roleplaying genre, especially if we're talking about our fifteen-year-old selves being transported to a fantasy realm out of the blue. That's what happens to this game's protagonist, Glen. He turns out to be your average, moody teenager who's socially awkward and lacks confidence. Basically, he's me from twenty-six years ago...

Glen makes his diffidence known straight off. A dwarf named Grom informs him that he's been randomly selected from the world of humans to help fight off an evil plague threatening the land of Asguaard. He informs everyone that he's possibly the worst person for the job, but decides to go along with the plan anyway because what choice does he have? Throughout his travels, he consistently bashes himself, doubts his talents, and mocks his teammates as if he's projecting his own insecurities onto them. 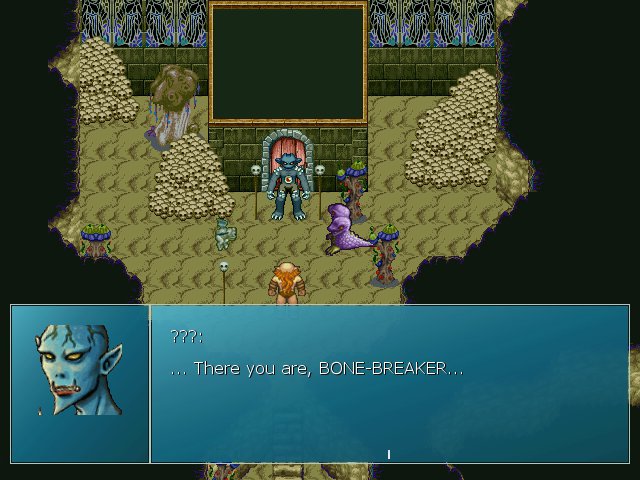 During a key event in the proceedings, Glen doesn't get what he wants from a particular exchange and ends up lashing out at his allies. He often shows what appears to be his true, ugly character, but you have to consider that his contempt comes from a lack of experience. Often, his pessimism crops up only to be proven wrong. He ends up feeling a tinge of remorse for how he conducted himself, and after a while he begins to change his tune. Midway through the campaign, we see him shed his initial self-doubt and overly critical attitude and shape into a more rational, clear-minded traveler. Honestly, that's how angst-ridden, buzzkill-type characters should be handled: as more dynamic folks with plenty of room to grow and mature.

Unfortunately, Glen's arc represents only one small facet that Asguaard nails. The rest of the storyline offers mostly forgettable material, from a one-dimension antagonist and his minions to a handful of fair-at-best plot beats. Your voyage mostly focuses on locating some items needed to complete your main objective. Though it's easy to recognize the imagination and creativity that went into dreaming up the game's many scenarios, you still conclude each act feeling a tad underwhelmed. For instance, at one point you travel into the depths of the planet itself, and somehow you come away not feeling even a little awed. The thing is it's hard not to dredge up thought of titles that executed that concept with due grandeur, like Final Fantasy IV. As a result, this adventure at times feels all the more meager by wearing its inspirations on its sleeve.

Combat plays out precisely as you would imagine, with your usual supply of commands including "attack," "defend," "skill," and "item." Of course, you can also select "rush" at the beginning of battle to automatically attack the opposition. Though you might be inclined to take a more tactical approach in this outing, don't bother. Your party grows into an unstoppable force before long, especially after a few bouts where you stop to grind for cash so you can afford improved equipment. On top of that, each town you visit features "trainers" who can teach or upgrade passive skills. Some of these perks affect the flow of battle by allowing you to strike foes as a fight begins, avoid ambushes, or attain buffs in certain situations. Other skills allow you to secure items you otherwise wouldn't be able to access, so you constantly have a healthy supply of consumables at your disposal. 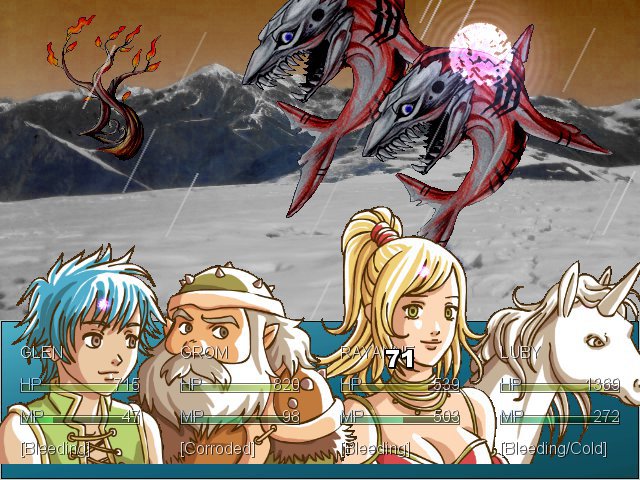 In other words, this title isn't going to require a whole lot of effort out of you. Even boss encounters play out in familiar fashion, regardless of whether you're taking on some mid-campaign nemesis or the final foe. Bear in mind that this adventure isn't unpleasant or detestable; it's just not as exciting as it could have been, and a fair portion of tedium comes from stomping toothless creatures repeatedly.

Remember when the story-side of the game got one element absolutely right? The same can be said for the game's design and mechanics. One thing developer Aldorlea understands well is that people who play old school RPGs dig exploration, especially when it's rewarding. This understanding shows most clearly in their dungeon designs, which offer you elaborate, drawn out stages filled with crossroads, side avenues, nooks, crannies, and secrets brimming with useful bonuses. You practically can't mosey down a corridor without bumping into a treasure chest, or even stumble down a dead end without accidentally finding a hidden room loaded with cash, healing items, and permanent stat boosters. Hell, if you're lucky, you might even locate a piece of equipment like a unique sword or a rare breastplate.

Even outside the dungeons, the world map offers numerous places to check out. During one excursion, you're supposed to head toward a huge kingdom in the middle of a piece of land. However, it might take you a while to get there when you have two other whole forests to check out, a few monster dens with lovely prizes (assuming you can vanquish the beasts within), and a couple of small villages with their own supplies of items and trainers. Needless to say, straying from the beaten path in Aldorlea titles--this one especially--remains in your best interest. 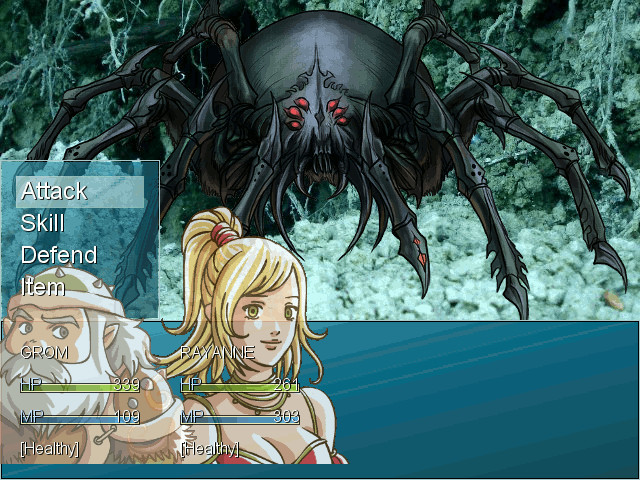 Asguaard easily proves entertaining, but only so much. I know a lot of people have stated that you'll only appreciate this game if you're a die hard fan of the genre, but that's only somewhat true. Because I've experienced so much of this category, it would take a lot of well-thought material to truly wow me. This one does a fair enough job to not make me regret playing it, mostly because it's lead character is relatable when he almost certainly shouldn't be. However, its dialed-back storytelling and weak enemies only leave me pining for a more adventurous, challenging quest.

If you enjoyed this Asguaard review, you're encouraged to discuss it with the author and with other members of the site's community. If you don't already have an HonestGamers account, you can sign up for one in a snap. Thank you for reading!

© 1998 - 2022 HonestGamers
None of the material contained within this site may be reproduced in any conceivable fashion without permission from the author(s) of said material. This site is not sponsored or endorsed by Nintendo, Sega, Sony, Microsoft, or any other such party. Asguaard is a registered trademark of its copyright holder. This site makes no claim to Asguaard, its characters, screenshots, artwork, music, or any intellectual property contained within. Opinions expressed on this site do not necessarily represent the opinion of site staff or sponsors. Staff and freelance reviews are typically written based on time spent with a retail review copy or review key for the game that is provided by its publisher.