That's what was going through my mind as I walked returning protagonist Chris Redfield through an ominously empty town in Africa, along with his soon to be comrade-in-arms Sheva. Mere minutes later, we were stuck in a house, surrounded by an angry, infected mob, also known as Majini, that were dying to get in through all possible entrances. I proceeded to cover up openings with shelves and literally popped a couple heads with my handgun. But it wasn't enough to hold them back. Next thing I knew, I was running around outside in a panic, climbing up ladders, kicking them down, and being chased by a crazed, masked figure with a deadly weapon.

Or so I thought. The devs really wanted Resident Evil 5 to be a bigger and badder version of its predecessor, but somewhere along the way I think the devs forgot what franchise this game belonged to. Early in, enemies attack and rush aggressively, to the point where trying to aim precisely is a joke. If these outbursts occurred in any prior game in the series, they would have been tense moments; however, the presence of a co-op partner, that can also attack, greatly changes the vibe for RE5. When a buddy is constantly watching your back and keeping most Majini foes at a distance, they feel more like nuisances. Sure, crowds can pin players into corners a couple times and ammo consumption is sometimes a worry, but the dread is gone, because enemies are no longer legit, freaky threats. 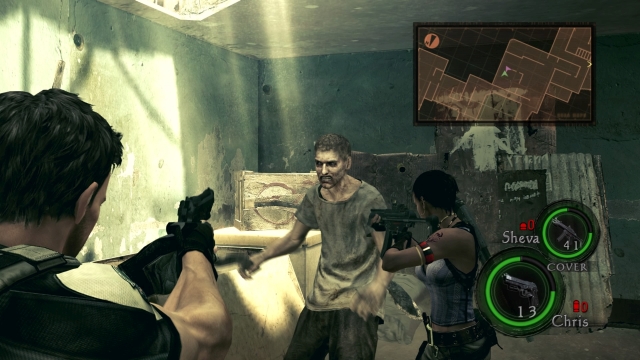 Deciding to go solo doesn't make things any better; in fact, that makes combat more annoying than it has any right to be. The AI for Sheva is terrible, since she often doesn't respond to Majini literally an inch behind Chris, has a habit of blocking your aim in tight spaces, which this game has lots of, usually exhausts her ammo in the back of your head, and she needlessly uses health items when you're not even low. Hogging health items to yourself usually isn't an option, either, because each character has a limited inventory of nine slots, meaning you have to give her something. Though, the most infuriating thing is how you can't immediately drop items in her inventory to make room, meaning you have to bring an item into your inventory and then drop it. Sometimes you have to do this during combat... The developers really should have given players a solo character option when playing alone.

But they just gotta have their "dynamic" co-op action, right? And what better way to showcase this than to have an entire act dedicated to repetitive mounted-gun action in the back of a speeding vehicle. Against what? Molotov-throwing motorcyclists, of course! It wouldn't be a Resident Evil game witho... Speaking of pointless segments, navigating the airboat in the swamp area is an amazing waste of time and resources, because nothing of value happens during the boat ride. Just stop at different spots, collect an important item, encounter more waves of Majini, and repeat. Enemies shooting arrows and bombs are also easy to dodge. It's downright a filler section, in an attempt to make the whole thing feel grander. The irony is, RE5 feels lesser due to these pointless segments, since time has been taken away from actual in-depth gameplay.

You're not even given a satisfying sensation when killing Majini. When you assault enemies in RE4, you feeeeel the impact as villagers limp to the ground in agony, hear heads explode with a crunchy, juicy sound effect, and the goofy gratification of using a suplex on stunned cultists. Attacking in RE5, even though it's essentially the same combat system, somehow feels and sounds muted, as if you're doing nothing to your opponents. Doesn't help that some actually hop right back up the instant you knock them down. But the one that hurts the most is the shotgun, as it sounds like you're pushing Majini to the ground with an air gun. What happened? 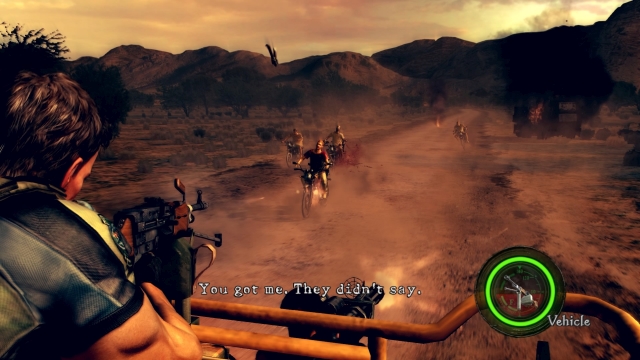 Is RE5 a terrible game? No, it's a terribly average action game that, for a split second, does familiar RE things towards the end, such as introducing creepy creatures that take more than a few simple bullets to kill. But then it goes full action schlock for the finale. In many ways, that's what helps make it disappointing, because the whole thing feels like a betrayal of its roots, in both how it failed at copying RE4, by going overboard with action, and the earlier titles in the franchise that oozed with dread and gloom. If you want an action game, you have a disposable one here with all its extra content from previous RE5 iterations, from Mercenaries and Versus modes, to a pale tribute of the first Resident Evil. Even then, a legit challenge is only imposed on the higher difficulty settings, one of which you have to unlock by beating the game on Veteran difficulty.

If you want a co-op experience, then have fun doing simple button pressing "challenges" between combat, something that occurred a lot with other co-op titles of its era; there's rarely any variations, and when you split from your partner, it's only for a super brief interval. If you want a Resident Evil experience, well... you'll get it in name only. RE5 is so basic in its approach to combat, story, and dialogue, that you can simply remove the RE brand name, slightly modify Chris and Jill's faces, rewrite tiny portions of the plot, and it can easily be a new IP from Capcom that borrowed RE4's mechanics. Because that's what Resident Evil 5 feels like.

If you enjoyed this Resident Evil 5 review, you're encouraged to discuss it with the author and with other members of the site's community. If you don't already have an HonestGamers account, you can sign up for one in a snap. Thank you for reading!

© 1998-2021 HonestGamers
None of the material contained within this site may be reproduced in any conceivable fashion without permission from the author(s) of said material. This site is not sponsored or endorsed by Nintendo, Sega, Sony, Microsoft, or any other such party. Resident Evil 5 is a registered trademark of its copyright holder. This site makes no claim to Resident Evil 5, its characters, screenshots, artwork, music, or any intellectual property contained within. Opinions expressed on this site do not necessarily represent the opinion of site staff or sponsors. Staff and freelance reviews are typically written based on time spent with a retail review copy or review key for the game that is provided by its publisher.