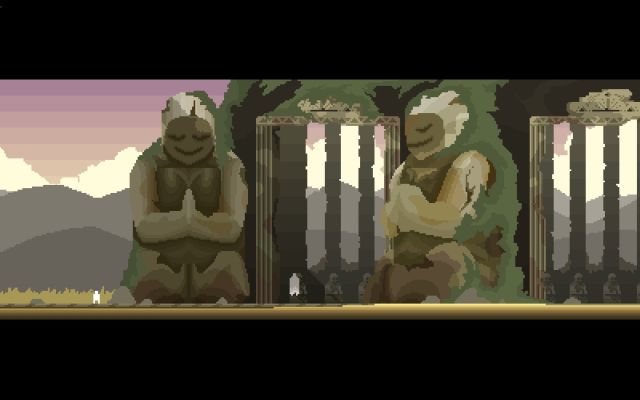 Qora is a world of both wonder and boredom. It's great to look at, but sometimes agonizing to play. You take the role of a nameless, unidentified protagonist that I can only assume is meant to be your avatar: a tiny, white splotch of pixels with legs and occasionally arms. As shown in the opening segment, you've moved to an ancient town situated on a mountain. The place is rich in culture and history, sporting numerous prayer mounts, old statues and ruined temples. While a hard-working crew builds your house, you decide to check out a nearby festival, greet the locals and explore a bit. During this excursion, you hear a voice from a massive idol that implores you to make a spiritual pilgrimage of the lands beyond the burg.

Prior to playing this game, I never thought someone could craft simple pixel scenery so breath-taking. While the lands you glimpse may not be photorealistic, they're no less picturesque. You see gorgeous valleys with sprawling, open terrain for miles in the background; caves filled with massive crystals and detailed structures of fallen civilizations; megafauna the likes of which haven't been spotted for eons; temples so grand you wish you could be there to actually view them, because you can't imagine any hand-crafted locale so enormous. On top of that, you possess a supernatural vision ability that allows you to witness past events or spy ghostly activity. It's obvious a lot of creativity and inspiration went into this game, and it's hard not to appreciate the level of work put into it. 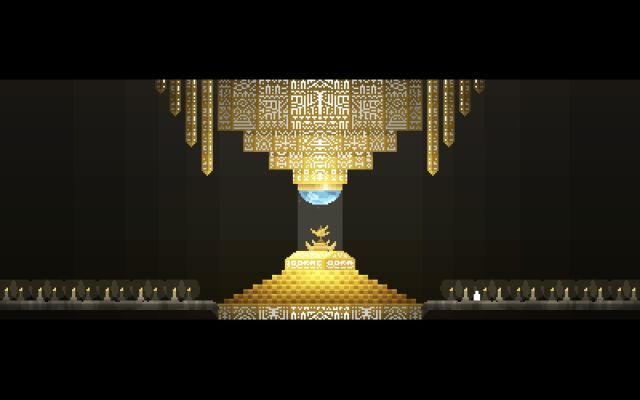 A brisk, ambient soundtrack provided by Holden Boyles expertly compliments the visuals, too. You can tell Qora was meant to be a relaxing titles by its music, as it greets you with soothing tones and terrific melodies that accentuate the game's sense of wonder. The score definitely captures its adventurous qualities, and reassures you that you won't meet with extreme difficulty. Rather, this title has that challenge-free "soul journey" feel to it, and its music works perfectly in tandem with the sights you see and phenomena you experience to create just that impression.

By now, you've probably re-read the first two sentences of this review and wondered when the "but" was coming, and here it is: this game is undeniably beautiful, but tedious.

This title is often referred to as a "walking simulator." You don't do much more than amble onward and look at things, similar in style to works like Dear Esther or Everybody's Gone to the Rapture. You don't solve any puzzles or face any real challenges, aside from attempting to earn the "good" ending. You accomplish that by lighting incense at every relevant statue, almost all of which are easy to access (one of them is kind of hidden, but locating it isn't too tough). You also occasionally perform menial tasks, such as chopping tall grass, breaking rocks or climbing ledges. However, all these events manage to do is slow the pacing of an already sluggish affair. 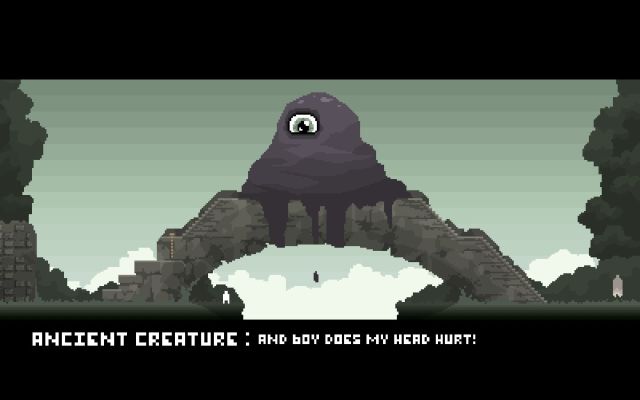 Qora's biggest issue is that it's not very engaging, and it grows tiresome as a result. If you're like me, you'll probably have to force yourself through the final bits of the campaign because they do little to keep you involved. More than anything, the game comes across as a collection of pixel art that you access by moving a white dot from one end of the screen to the other. Quite a few times I either checked out or hoped I was approaching the finale so I could be done with the quest, because awesome graphics and excellent music only carry a dull product so far.

Eventually, I reached a heavenly place and began what I thought would be a moving, spiritual ending. After all, I managed to find all of the prayer statues, so I figured I should get the good ending. Remember, "good" is subjective... Instead of a conclusion that wrapped up this odyssey neatly, the game went a completely different direction that didn't mesh at all with its tone because it was outright silly. Worse, it also indicated that I wasn't quite done and had to access another area, which then sent me through a series of rooms that again didn't jibe with the preceding two hours of content.

I stared at the screen in disbelief and said, "I walked all that way for this!?" 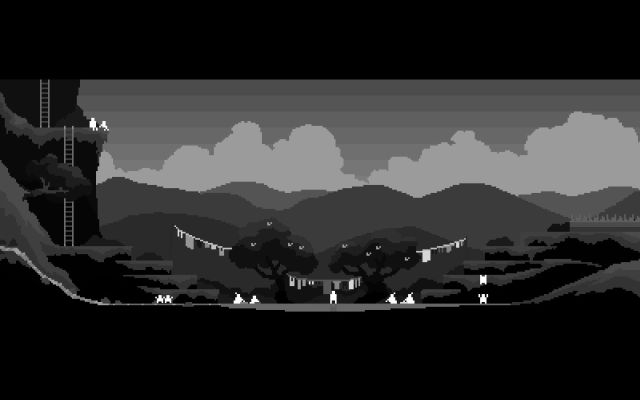 Finally, I was able to put Qora to rest once that section was through, but the damage had already been done. I was glad to cross this one off my backlog list, partly because getting to the end felt like an drawn-out chore, and party because the ending I received was sigh-worthy and unfulfilling. However, I look back at my screenshots and still get goosebumps. The game nailed some of its material, but still faltered in a lot of ways. It's a wondrous little trip, but one that you endure rather than savor.
2.5/5

If you enjoyed this Qora review, you're encouraged to discuss it with the author and with other members of the site's community. If you don't already have an HonestGamers account, you can sign up for one in a snap. Thank you for reading!

© 1998-2020 HonestGamers
None of the material contained within this site may be reproduced in any conceivable fashion without permission from the author(s) of said material. This site is not sponsored or endorsed by Nintendo, Sega, Sony, Microsoft, or any other such party. Qora is a registered trademark of its copyright holder. This site makes no claim to Qora, its characters, screenshots, artwork, music, or any intellectual property contained within. Opinions expressed on this site do not necessarily represent the opinion of site staff or sponsors. Staff and freelance reviews are typically written based on time spent with a retail review copy or review key for the game that is provided by its publisher.