Thats not exactly high praise when offered out of context, but we are talking about a 32X game here. The 32X is a forgotten system with a circumcised library, only half of which are awful full-motion video games from Digital Pictures. That Metal Head isnt awful already pushes it to the higher echelons of its chosen platform, but what if I were then to heap further middling praise upon it? Not only is it not awful, but its also a 32X exclusive! You cant find its particular brand of mediocrity anywhere else! Its also maddeningly ambitious.

The game is a mission-based mech shooter that secretly wants to be a first person shooter, but more or less isnt. In keeping with the fact that youre controlling a building-tall robot, you awkwardly lumber around cities, as bipedal weapon platforms are wont to do. These mechs, or Metal Heads, were developed by the world government to put a stop to numerous civil conflicts that threatened to blossom into a new world war and, until recently, represented a sufficient threat to keep everyone in check. As such, you spend your time inside your giant robot performing various missions for the military arm you belong to. Usually, this means being dropped into a town and destroying all the hostiles that you find. But that's not always true; some unique mission exist wherein you escort a helicopter to its destination, or are tasked with taking photos of an enemy encampment. The more time you spend with Metal Head, the more ambitious little touches you discover. 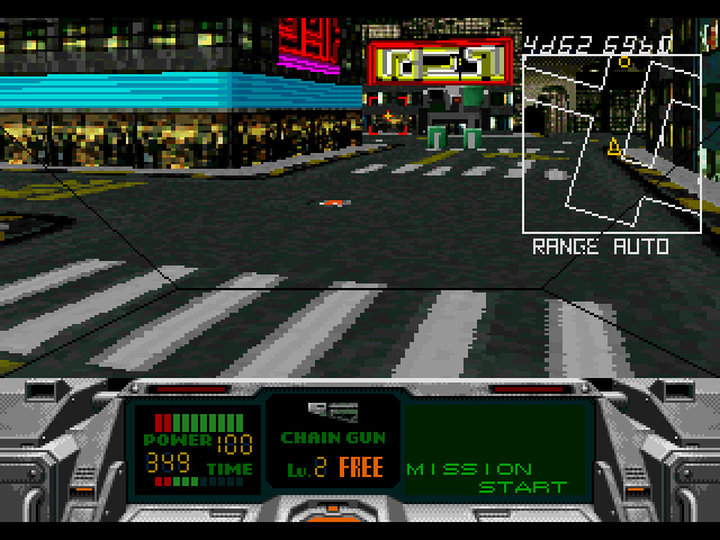 For example! Did you know that one of the big selling points of the 32X was its bitmapping capability? Bitmapping allows you to add textures to polygons, so not only did you have a machine capable of sculpting working 3D models, but one capable of adding basic definition to them as well. This was then only taken advantage of maybe two or three times, and Metal Head wanted it some of that. You may scoff at the primitive aesthetic these days, but genuine effort has clearly been bestowed upon making the game look as good and polished as it can be. Some of it plays out as cheesy brilliance; explode an enemy vehicle and it starts to serenely float away, as if it is a helium balloon cut loose from its tether. On its peaceful ascent towards the heavens, it starts coming apart, arms or gun or tracks separating from the main body, only to fall to the ground in fragments. This causes a small, localised rain of exploding machine parts. Its like a graceful, slow-motion death captured in a world that has no desire to slow down, so everything else around it continues in real time.

But some of it is more noteworthy. Metal Head gives you the option to scroll between four different camera perspectives, and even has a night vision mode you can toggle on and off at will. We take these things for granted now (and in truth, all night vision does is paint everything in a familiar shade of green), but it was a rarely used mechanic back in 1995; the 16-bit machines simply lacked the ability to pull it off particularly well. The window for this being innovative was short-lived indeed, with the Saturn and the Playstation out-performing these modest feats on day one, but it fearlessly tries to push the envelope as much as it can within its tiny period of relevance.

Draw distance is where the game suffers the most; sometimes youre alerted to an enemy target because youre being shot at, but youll lack visual confirmation until you lurch closer to it. Still, the team responsible didnt have to try as hard as it did; by the time development had finished, it was obvious the project was being shipped to a doomed console. And yet, it was determined to go down swinging. In-mission briefs are delivered by still frames of live actors with hilariously flappy lip-sync, sprouting bravely delivered lines of recorded words which sometimes sounds decipherable. 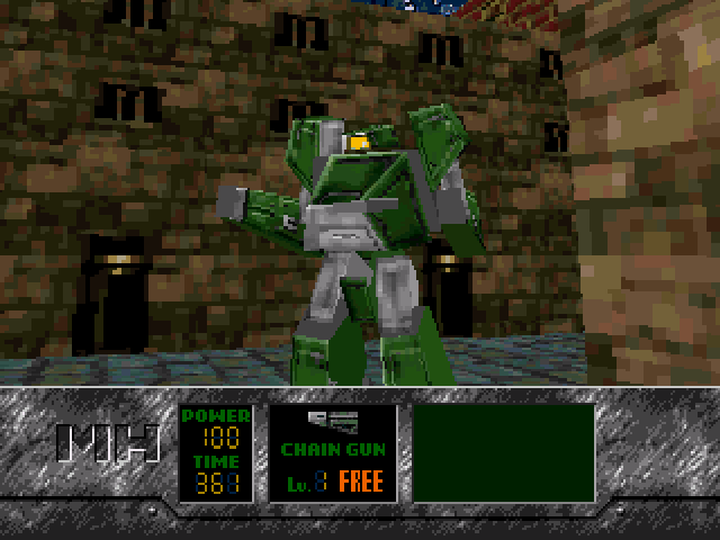 Whats most surprising is how well it all still manages to hold up in spite of the above issues. Sure, its clumsy and antiqued, but thats what you can expect from antiqued and clumsy games. That sense of clumsiness seems to be a symptom of the mech genre, rather than unique to Metal Head, and even that can be seriously alleviated by using the six-button pad instead of the standard three. Trying to control your robot with just the three buttons quickly becomes a nightmare, since you have to hit keys and directions simultaneously to trigger pedestrian actions such as run or strafe. You should do your best to *ahem* side-step that.

Because it doesnt just repeat the early missions that ask you to destroy everything and then go home, theres an unexpected sense of variety included in the proceedings. Sometimes you fight your way into the guts of an enemy base to take out their generator because, sometimes, just killing all the enemies isnt enough; you have to demolish their homes, too. Metal Head isnt awful, which doesnt sound like high praise, so lets dial it up a bit. Metal Head wasnt content with its place in life as an obsolete game on an obsolete platform, destined to be forgotten and outclassed mere months after its conception. So it tries to be more than it should be. As a result, Metal Head isnt awful. Its actually pretty good...
4/5

If you enjoyed this Metal Head review, you're encouraged to discuss it with the author and with other members of the site's community. If you don't already have an HonestGamers account, you can sign up for one in a snap. Thank you for reading!

© 1998-2020 HonestGamers
None of the material contained within this site may be reproduced in any conceivable fashion without permission from the author(s) of said material. This site is not sponsored or endorsed by Nintendo, Sega, Sony, Microsoft, or any other such party. Metal Head is a registered trademark of its copyright holder. This site makes no claim to Metal Head, its characters, screenshots, artwork, music, or any intellectual property contained within. Opinions expressed on this site do not necessarily represent the opinion of site staff or sponsors. Staff and freelance reviews are typically written based on time spent with a retail review copy or review key for the game that is provided by its publisher.