Im going to talk about some mundane technical stuff for a while. By doing this, I can trick people into thinking that this review isnt going to veer hard into sheer weirdness later on.

Yakuza 2 is a 2008 PS2 explorative brawler that, quite secretly, was kind of excellent. Its the continuing tale of Kazuma Kiryu, a former Yakuza member trying to make a go of it as a civilian. Hes really bad at it. Turns out his prior employers, The Tojo Clan, are having major issues with a rival faction, the Omni Alliance, and have genuine fears of being assimilated. After the events from the previous game, theyre drastically short of manpower, so are forced to turn to Kiryu. In an attempt to avoid outright war between the two factions, he agrees to go on a diplomatic mission, visiting the Omni to try and barter peace. To his surprise, the senior members of the alliance seem pretty receptive to the whole idea. Everything seems to be going well. Until it isnt.

Most of the blame can be placed on Ryuji Goda, the impatient patriarch of an upstart Omni splinter clan spoiling for conflict. Ryujis this massive hulk of a man, always seemingly on the verge of losing his shit and battering everything in sight. But writing him off as a brainless lug would be a mistake; its his careful scheming that continues to snatch away any hope of the peace talks succeeding. He steals scenes by sheer presence. Hes a rumbling volcano of an antagonist youre always expecting to explode, but contradicts this with an air of intelligence that makes him all the more chilling. He wants a war. If anyone can get one, its him. 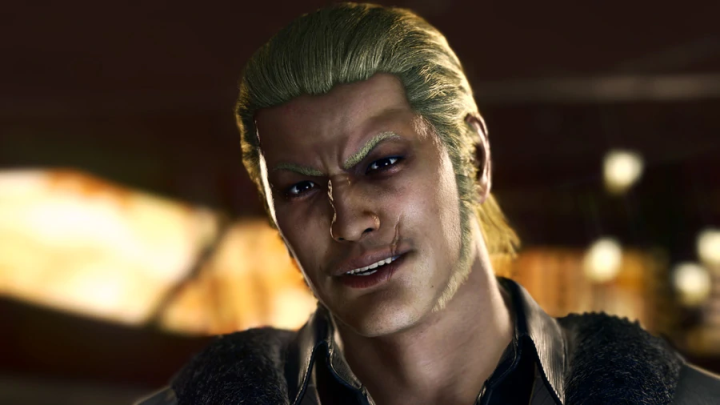 This was all very well received, with a lot of series veterans ranking Ryuji as the best foil the series has yet to produce. But more people should have been part of this discussion; Despite being critically acclaimed at every step and having a loyal, vocal fanbase Yakuza never graduated any further than an underground hit outside of Japan. Then Yakuza 0 happened and everyone finally piled on the bandwagon. And they were very, very happy to find there was this whopping back catalogue of games to work through, giving SEGA the luxurious problem that there was a massive spike of interest in their old games. The speed bump was that the early, early entries were three console generations removed, but they had to find their way onto the market somehow. SEGA could have taken the easy route, shined their archaic software up as best they could and released them as HD remasters (as they would for most of the series) but they went above and beyond for the most venerable games. Yakuza 1 & 2 became Yakuza Kiwami 1 & 2, both rebuilt from the ground up using the new engine developed initially for Yakuza 6. And there was much rejoicing.

This is probably going to end up being a long review already, so Ill try and save us both some effort and tell you that the Kiwamis make a ridiculous amount of quality of life changes, transforming brilliant games ravaged by time into brilliant games that take advantage of modern advancements. It was a stroke of genius from the giant brains over at SEGA, meaning that people could transition from the series prequel, Yakuza 0, straight into the established canon without a massive quality drop. People making the trip to Yakuza Kiwami found themselves playing a faithful adaptation of the original game with all the bluster and sheen found in Zero. Good times were had. And then Kiwami 2 blew it away.

Its the bigger game, for one, but it also had more extras implemented. It adopted the cabaret manager side quest from Zero and the RTS clan creator from Six. Theres three unlockable chapters for lovable psychopath, Goro Majima, explaining what hes been up to between games, and even tying back to his origins in Zero. Where perhaps it noticeably falters in comparison is that, rather than adopt the same combat system as Zero and the first Kiwami, which gave you multiple fighting stances you can cycle through mid-combat, it instead refines Sixs single-style combat, but with a renewed interest in heat actions. These are high-powered attacks that momentarily pause combat to allow Kiryu to do something unspeakable to his opponents. Like ruthlessly batter them with a traffic cone. Or stab them in the belly before driving the knife even further in with a sadistic knee lift. Or throwing them groin-first into a nearby pylon. Or casually dropping them onto an already downed thug. Or, and this one really sucks, being lobbed a used plunger from a friendly toilet attendant, suction cupping someones face with it, then using it to repeatedly mash the back of their head into the floor. Youll eventually pry the plunger free from your victims face, complete with a splattering of the urinal water that was trapped within. 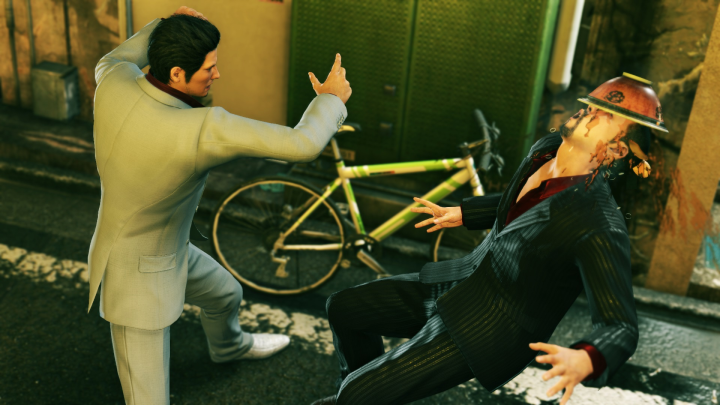 I guess that signals that were getting close to the weirdness.

Like all Yakuza games, if you so desired, you can stick solely to the plot missions, and find yourself enveloped in a gritty tale of murder, betrayal and organised crime. Under this murky spotlight, no one comes out clean; even someone as driven by honour as Kiryu routinely drowns in grief, weighed down by actions he feels he has to take. He wanted to get out of the Yakuza life to keep his family safe, but if he turns his back on the Tojo Clan when they need him the most, then a lot of people could die. Kiryu feels duty bound to try and protect everyone and invites the weight of the world upon his shoulders. Its no surprise he often gets crushed beneath it. Slinking through the back alleys of Kamurocho, he finds a group of thugs harassing innocent bystanders, and solves the issue the only way he knows; by punching things. Only, theyre not just standard thugs, but junior members of a Yakuza sect. Embarrassed by the actions of his underlings, the clan patriarch invites Kiryu to his favourite club. Begrudgingly, so no one involved loses any face, Kiryu tags along. The night ends with a massive brawl where Kiryu has to fight half a dozen beefy men wearing diapers and sucking pacifiers. Once theyre thoroughly beaten down, he then offers a wholesome soliloquy about how he would never shame someone for their kinks, he expects better than for people to push their fetishes onto others. Its just another Friday night. 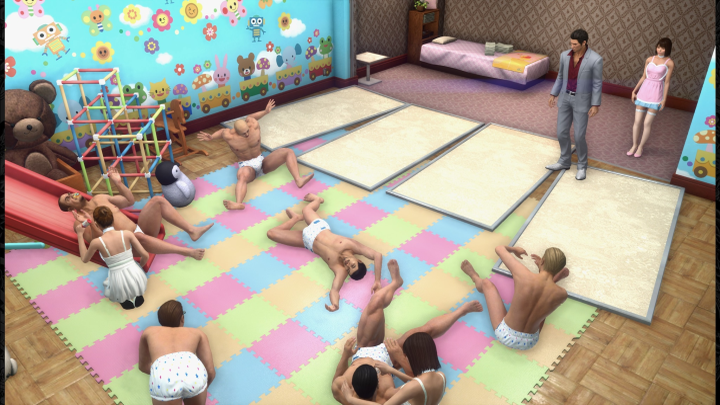 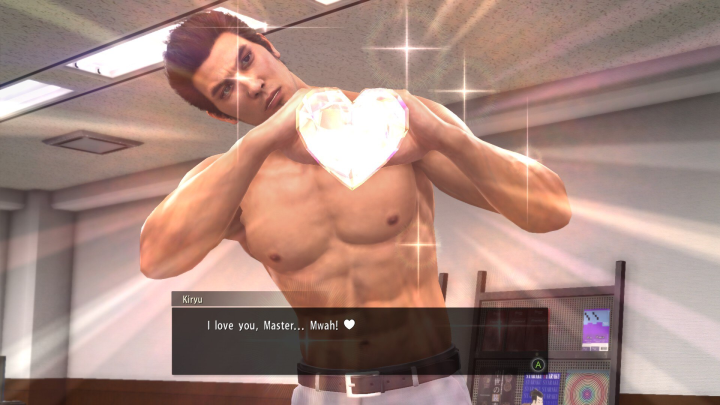 Its his burning aspiration to help people that sees him step in for an absent voice actor for a video game hes never heard of, only to discover halfway through the reading that hes voicing a yaoi protagonist. Or how he becomes an emergency stand in model, forced to pose shirtless, throwing up heart signs and trying to channel the essence of a naïve maid. Just in case that wasnt uncomfortable enough, the photographer insists on only wearing the briefest of speedos. The charade ends with, of course, Kiryu punching him in the face then later hiring him for a construction company. But not everything revolves around sexual deviants; maybe instead hell hunt down groups of armed thugs, hoping to find the perfect butcher knife for a struggling chef, or collect pocket tissues being handed out as nightclub advertising in an attempt to save an unfortunate soul caught short in a public bathroom. He can deal with a cursed video tape that prophesied his death in seven days or wage war against unscrupulous broadband salesmen. If hes looking for normality in his side quests, maybe hell visit the batting cages instead, where hes promptly challenged by a vacationing major league pitcher. Or he can go to an indoor driving range and play golf bingo. Or he can visit various arcades and then lose a ridiculous amount of hours playing SEGA hidden gem, Virtua On, because Kiryu is a man of culture, and cultured men love Virtua On

Then he can use the arcade bathroom and partake in a mini-game that involves regulating your streams of urine. Its called Toylets, and I begrudgingly admire that pun. It probably wont surprise many to learn that this a real thing that really happens because in Japan, much like in Yakuza, despite all the pomp and grandeur, youre never very far away from a bizarre oddity or three.

If you enjoyed this Yakuza Kiwami 2 review, you're encouraged to discuss it with the author and with other members of the site's community. If you don't already have an HonestGamers account, you can sign up for one in a snap. Thank you for reading!

© 1998-2021 HonestGamers
None of the material contained within this site may be reproduced in any conceivable fashion without permission from the author(s) of said material. This site is not sponsored or endorsed by Nintendo, Sega, Sony, Microsoft, or any other such party. Yakuza Kiwami 2 is a registered trademark of its copyright holder. This site makes no claim to Yakuza Kiwami 2, its characters, screenshots, artwork, music, or any intellectual property contained within. Opinions expressed on this site do not necessarily represent the opinion of site staff or sponsors. Staff and freelance reviews are typically written based on time spent with a retail review copy or review key for the game that is provided by its publisher.