Everything is right where you left it on the Nintendo Entertainment System, but more colourful, better sounding and more responsive in general. Except now were on the PC Engine, or rather its North American counterpart, the oversized and oddly named TurboGrafx-16. This game makes nearly as many missteps as the NEC did with the packaging and presentation of said hardware, even though it is more advanced.

So I suppose that makes Bomberman a NES port to NECs console, since it was the Lode, er forerunner. The history of Bomberman starts with a title localized in Europe as "Eric and the Floaters", thanks to local tensions about the use of unauthorized incendiaries. The advancements this game has made are stuck with uncomfortable growing pains, but lets not garrote the protagonist before he has a chance to rescue the girl. 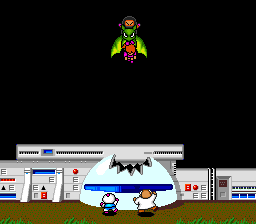 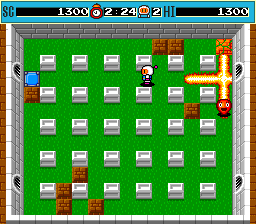 You heard it, this is a franchise first: A token damsel in distress snatched by Bombermans rival and locked away in his castle, but Ill not judge it too harshly for that. Future installments supplant this trope-lashed story with a wholly original mythos. What we get in place of that is a considerable bump up in colour, and a significant improvement in detail, but nothing the NES can't match. The PC Engine was a powerful slice of silicon, but was early to the party and quickly outdated. That, friends, is the theme of this review.

I could write a short guide about the particulars of timing and bombing tactics in these games, but as with most, persistence, patience and loads of button pressing will earn you those ever valuable quick-thinking reflex based skills. The good news is that everything you learn is transferable to most of the other games in the franchise, which is a pretty unique feature, and has done a lot for the longevity of the series. Even the Mario games have seen more alterations to their base mechanics. 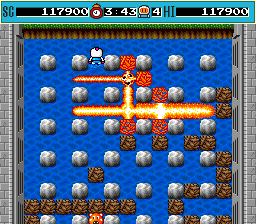 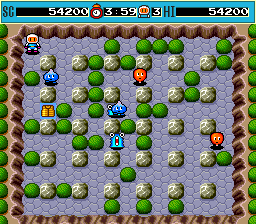 In terms of mechanics, Bomberman is every bit as explosive and embattled as he is on any platform, as this title almost fully embodies what players would have for an entire decade before any significant changes were introduced. We're looking at minor tweaks here, unfortunately. This time around the grid there's an overworld that situates Bomberman in one of eight areas consisting of eight stages. You start off in the typical green and grey grid stage with red bricks you can destroy along with a handful of orange balloon foes, and then move through a colourful array of areas that include a forest and even a water flooded area, and so on.

Everything recycled is new again, except for the dejected foes that didnt make the transition, which is hard to complain about because new enemies are crafty in new ways compared to the ones they replace. Noteworthy examples are a large wheel that takes two hits to defeat, cheese-wheel looking slabs that hurl themselves at you and a cutesy flying dragon that floats over blocks. Powerups are entirely recycled, too, except that the fireproof vest lasts only until you exit the level. Mastering bomb arrangement and timing is your only way to win, but youve got few options to handle defeat:

First of all youve got extra lives, and youll pick up more periodically as you progress. Of course, restarting from scratch is the forever option, and passcodes made a triumphant return, but Hudson has introduced the ability to save your progress. When youre out of continues, of which you only get two, you can just reload from the main menu. The good news is that youll keep your bomb count and range for future demolitions planning. On the other hand, youll lose everything else and that can make progressing unnecessarily wearisome. 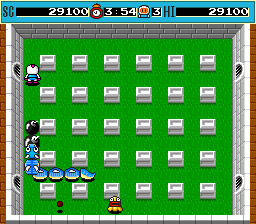 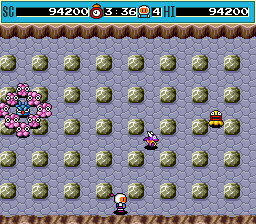 Bosses occur at the end of every area and can be very tough if youre unprepared. Almost invariably youre going to die and lose your advantage. Its not much fun starting a level or boss battle this way, though it is doable if you have the patience and can be satisfying to overcome those odds. That said, when you have your bomb trigger powerup, these fights are almost absurdly easily when youve learned exactly what you need to do. The catch is that passcodes are only given when youve died, and neither that nor the save option are going to enable you to recover what youve lost.

That pesky timer returns, as it always does, but this time you'll start out with four minutes, which will be scaled down to three in the later levels. Very seldom will you run afoul of the last second, but beware that you will explode when time runs out. Bomberman will explode. Not you. Got it? Good.

Caution, however, wont protect you from the more grueling boss fights later in the game, and unlike Bomberman 93, you dont get any warning, youre just dropped into a room with a baddie and expected to sort things out. The last fight is a real pain in the rear as youre pitted against four Bomber, er... men who shapeshift into fire-spitting enemies while your black-clothed rival scoots around with a forcefield that protects him from all damage. Frankly I ran out of patience and used save states to prevent the loss of my powerups. Beating the game became an exercise in frustration and futility, and thats not what Im looking for when I play. 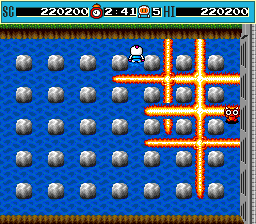 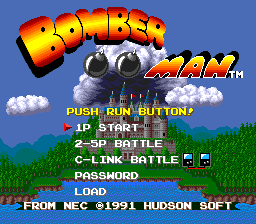 It seems Im not alone in this view, as this isnt one of those games players flock to for their hit of nostalgia. Another failure point is the music, which is more expressive and detailed on the TurboGrafx-16s PSG soundchip - more capable than the fixed function hardware in the NES. Even though the stages change theme, the music doesnt follow along, sporting just one song right up until the last area. There are boss themes, but just two of those, and then the fire vest theme and credits. Not much to rave about there, and though they establish the de facto mix of the Bomberman theme, its not exactly what Id call toe tapping.

Its important to note that multiplayer modes are available, but not having tested them, thats about all Im prepared to say on the subject.

Listen, Im not suggesting that I wouldnt have had the patience to play the game without save states, but the teething problems that arrived with these new boss teeth make the game a less entertaining proposition than NES Bomberman or even its sequel. The improvements are both welcome and would have undersold the TurboGrafx-16 had they not been made... but I think Ill be passing this one over for much improved Bomberman 93, and Id suggest you do as well.

If you enjoyed this Bomberman review, you're encouraged to discuss it with the author and with other members of the site's community. If you don't already have an HonestGamers account, you can sign up for one in a snap. Thank you for reading!

© 1998-2022 HonestGamers
None of the material contained within this site may be reproduced in any conceivable fashion without permission from the author(s) of said material. This site is not sponsored or endorsed by Nintendo, Sega, Sony, Microsoft, or any other such party. Bomberman is a registered trademark of its copyright holder. This site makes no claim to Bomberman, its characters, screenshots, artwork, music, or any intellectual property contained within. Opinions expressed on this site do not necessarily represent the opinion of site staff or sponsors. Staff and freelance reviews are typically written based on time spent with a retail review copy or review key for the game that is provided by its publisher.