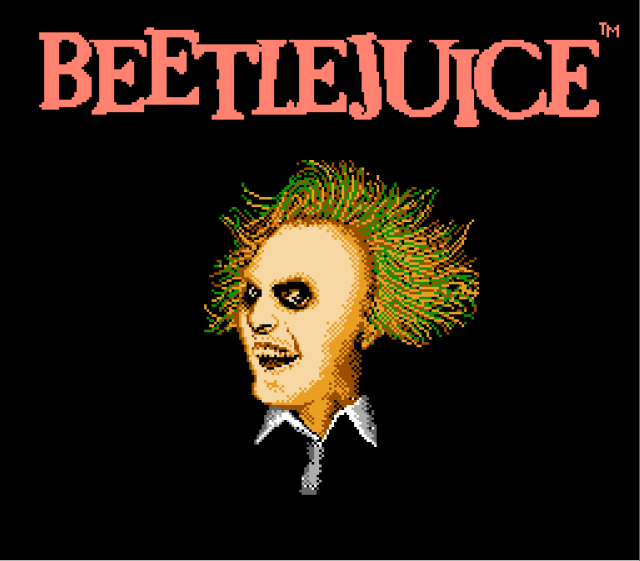 The licensed platformer Beetlejuice lies buried near the bottom of the NES library, mostly forgotten. It awaits curious retro players who never experienced it back in the day, or anyone looking to revisit the lesser known games of the early '90s. An unsuspecting player might conjure this long lost ghost back up, hoping to stumble upon a hidden gem or a sleeper hit. However, they'll only find a frustrating, broken side-scroller that gets worse the farther they advance through it.

You won't hate it at first, though. It initially seems like an ordinary platformer where you guide the titular "ghost with the most" through set pieces from the movie. It even features some pleasantly surreal touches, like a shark swimming in a giant bathtub or a segment where you hop on clouds above the town Winter River. Remember when Michael Keaton did that in the movie? You even encounter some recognizable genre tropes, like stock enemies patrolling tight ledges or gauntlets of moving platforms. Hell, there's even terrific music on offer, courtesy of David Wise. While the soundtrack may not exactly exude the movie's sensibilities, it maintains the genre standard of lively, upbeat tracks.

The first sign of spoilage comes when you run into a beehive and the screen ceases scrolling. A stationary cloud sits at the very edge, refusing to budge when you leap onto it. The game offers no detailed objective or even a hint, leaving you to either experiment with random nonsense or read a FAQ. As it turns out, you need to eliminate the hive, which you accomplish by entering a nearby shop and purchasing a "scare." These are items that allow you to fire a limited supply of bullets, so long as you avoid taking damage. Amassing the funds is easy, too. You only need to stand next to a hole and stomp on tiny insects that leap out of it for a while. Yeah, you read that correctly: you're expected to grind for cash in a 2D platformer. 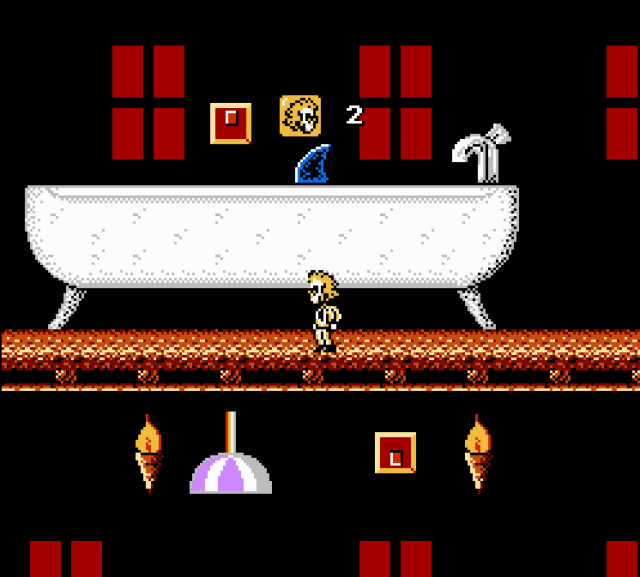 And you will grind often, too. Just one scare isn't adequate for survival, so you'll need to maintain a healthy supply of them. Not only do you encounter a fair number of regular enemies who must be killed, such as giant toads, but bosses also crop up occasionally. You obviously need firepower to slay them, but if you run out before you defeat one, you're screwed. You'll die and respawn right in front of the boss without a single shot to spare, trapping you until you reach a "game over."

But here's the real kicker: the game doesn't tell you how to defeat the bosses. Thanks to that, you'll likely go into the first one thinking you need to nail him a certain number of times while dodging his rudimentary attack pattern, when you're actually supposed to force him back against the opposite wall instead.

As you advance, even the platforming goes awry. Enemy populations flourish, placing multiple creatures on a single platform or section. You also don't receive many invincibility frames when you take damage, so you typically sustain multiple shots at a time and die easily as a result. Did I mention that you fly a decent ways back when you collide with a foe? Or that some critters have a habit of spawning out of nowhere, before you can react to their presence? Believe me, you'll see a lot of this routine: jump onto a ledge, get hit by an off-screen roach, fly back, smack into another roach, fly back again, plummet to your death. Take care not to perish too often, because you only have so many continues, plus no passwords or save files to fall back on.

After several beatings and numerous grind sessions, you arrive at the third stage and witness the wheels truly coming off the bus. The game shifts to a top-down action title, where you creep through the Deetz family's house and avoid possessed sculptures and giant flies. Each section requires you to either locate a key and unlock an exit or carefully maneuver through a vertically scrolling maze of hallways without getting crushed by the moving walls. This change of pace might seem welcome compared to the chaos you endured beforehand, until you realize you can't move diagonally, your speed is inadequate and enemy movement is so erratic that you constantly bump into them. I saw the "game over" screen more times here than during any other level. 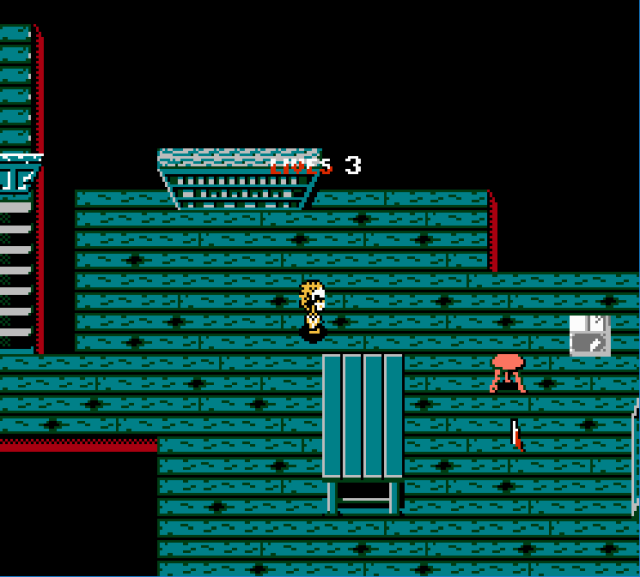 It gets worse, too. It always gets worse. Now and then, a mysterious door arrives and chases you. If you touch it, it'll whisk you away to Saturn, where you fight a sandworm from the film. You're better off resetting if this happens, because the worm is nearly impossible to slay. Does it get even worse? Oh, heavens yes! You see, the whole top-down stage is a maze, and you need to guess your way through it. Some segments have multiple exits, with one allowing you to advance onward and the other taking you to Saturn. Yup, this game just randomly takes you to its worst feature.

How do you further exacerbate these already festering wounds? With fetch quests, of course! When you aren't being killed by weird statues, crushed by moving walls or sent to sandy, alternate dimensions, you're snatching up wedding rings, fire extinguishers, eyeglasses, spray cans and a wide assortment of other garbge. You need these things because characters from the film block some of the exits, and only event items will make them scoot over a couple of feet so you can pass.

However, you don't select one of these items from a handy inventory screen, but must use them in the order in which you nabbed them. So let's say you encounter Otho, who wants the spray can. If it's the third item in your collection, you'll need to drop the two objects before it and pick them back up. Every time you snatch an item, a short cutscene plays out where Betelgeuse drops hints regarding how to use it. He does this literally EVERY time you pick the item up, and you'll grab some goods numerous times. Oh, plus some of your possessions move when you drop them, like the hammer or the mouse, so you'll need to chase them and time the "grab" button perfectly. This same button also uses an item, so if you fail to secure a moving object, you'll end up dropping the next goody on your list. 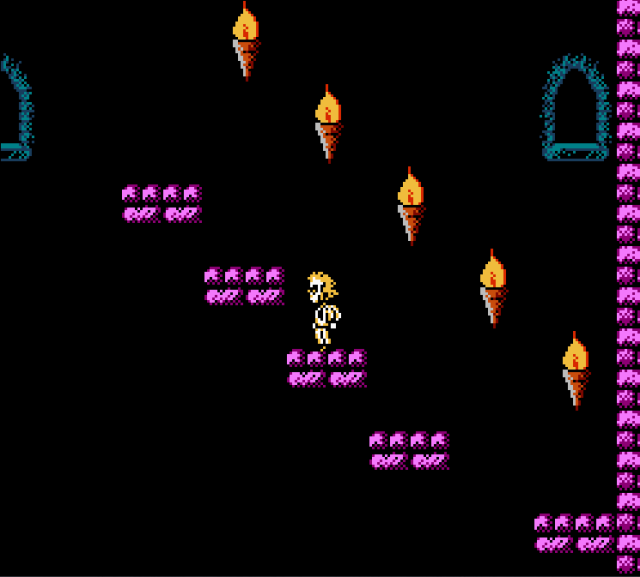 Ironically, this top-down stage was probably meant to improve Beetlejuice by adding variety. However, all it did was crank the pain factor up past eleven, all thanks to clumsy dodging mechanics, poorly implemented scavenger hunts and a randomly appearing punishment level. You endure all of this for one final side-scrolling event, where you search for six numbered tickets before exiting through the final door. Honestly, if you don't rage quit before you get to this point, you should have a holiday dedicated to you.

My recommendation to you, dear retro game pilgrims, is to avoid this title. Pretend you've never heard of it, or that it was exorcised as it should've been. Only the most sadistic of gaming masochists need apply, and heaven help them...
1.5/5

If you enjoyed this Beetlejuice review, you're encouraged to discuss it with the author and with other members of the site's community. If you don't already have an HonestGamers account, you can sign up for one in a snap. Thank you for reading!

© 1998-2020 HonestGamers
None of the material contained within this site may be reproduced in any conceivable fashion without permission from the author(s) of said material. This site is not sponsored or endorsed by Nintendo, Sega, Sony, Microsoft, or any other such party. Beetlejuice is a registered trademark of its copyright holder. This site makes no claim to Beetlejuice, its characters, screenshots, artwork, music, or any intellectual property contained within. Opinions expressed on this site do not necessarily represent the opinion of site staff or sponsors. Staff and freelance reviews are typically written based on time spent with a retail review copy or review key for the game that is provided by its publisher.