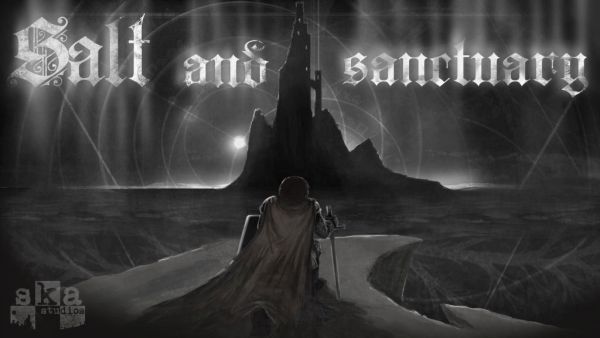 Salt and Sanctuary begins with a shipwreck. You awaken within the pitch black innards of a vessel in calamity. During a horrendous storm, a Lovecraftian horror emerged from the watery depths, and now it aims to reduce your ride to splinters. You amble to the deck to meet the beast, but the tentacled demon snuffs out your spirit in seconds and demolishes the watercraft. You sink below the storm-maddened waves and all but drown. Though you survive the encounter and come to rest on the shores of a misty island located nearby, your fate might be worse than a salty grave at sea...

The prelude described above makes one thing clear: you've embarked on a voyage that will send you through hell. After regaining consciousness on the beach, you draw your pitiful blade and the once-dead inhabitants of the coast proceed to knock your teeth in. From the moment armed zombies surround you when you enter a fortress near the shore, you know that you're going to spend the rest of the campaign toiling for an advantage over your relentless opposition. Maybe you'll learn to roll with Salt and Sanctuary's punches, or perhaps the game will utterly destroy you.

The foggy, sandy environs give way to a hill littered with patches of grass and reanimated corpses. Your first few bouts might prove difficult as you acclimate yourself to Salt and Sanctuary's physics. However, handling the game's combat system should prove a snap if you're familiar with a title known as Dark Souls. Raising your shield stymies oncoming arrows, and rolling to the side prevents you from losing a limb. In response, you swing your sword and watch in awe as undead heads satisfyingly separate from bodies and roll down the knoll. Blood sprays from stumps, covering the scenery in rich crimson. You also get a few gold coins and a tiny helping of salt (which serves as experience in this quest), likely extracted from the tears of fallen Salt and Sanctuary players, whose dying apparitions appear throughout the isle. 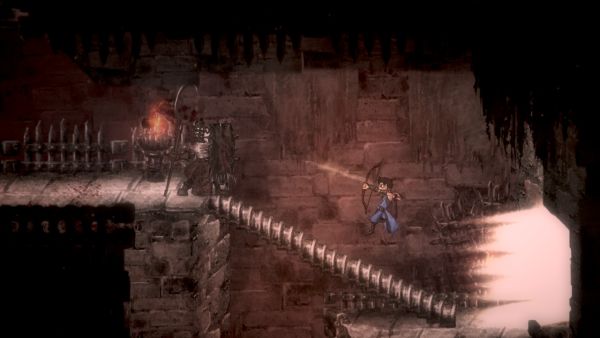 Although the contentment of slaughtering evil highlights the Salt and Sanctuary experience, the game makes doubly sure to knock you down a few pegs every so often. You might feel like a hardened warrior while you're butchering weak bats and bullying possessed porcelain dolls, but once you run afoul of a skyscraping, armor-clad foe or a hulking monstrosity, hope and confidence both diminish. Perilous situations tend to guard helpful rewards, however, so you steel your resolve to meet the unstoppable opponent head-on. Sometimes you score just enough slashes to fell the titan. Other times, your blows do little more than tickle him before he brings down his hefty, crushing foot. You die, you respawn and you try again.

Unfortunately, your demise is not always predictable. For instance, you might spot what appears to be a hybrid unicorn-mosquito. It looks like it should prove simple to eliminate, until it charges full bore, impales you on its proboscis and devours ninety percent of your hit points. As you pull yourself back to your feet, the creature doesn't relent. It speeds towards you once more and slurps the remaining pints of blood from your body. You die, you respawn and you try again.

You stand on a ledge and notice an item just below, so you decide to drop down and nab it. That's fine, except that you miscalculated the height of the required fall. Instead of landing comfortably, you splatter. You die, you respawn and you try again. 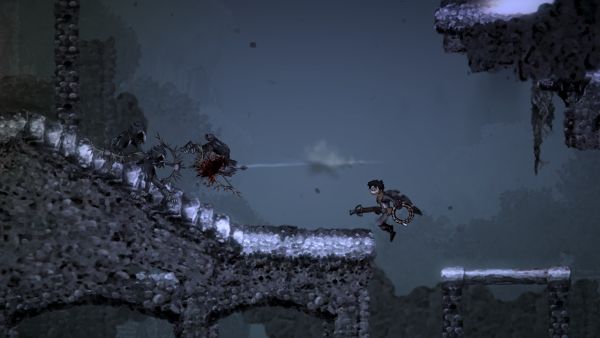 You negotiate a series of rickety platforms positioned in the branches of towering trees, and one of them crumbles before you can leap to the next. You hit the ground with a sickening thud. You die, you respawn and you try again.

You're locked in combat with an ogre-like abomination and the game's "minimize to desktop" glitch strikes, or you open a treasure chest that's actually a mimic, or you fail to notice the approach of an invisible witch, who showers you in electric magic. You die, you respawn and you try again.

More often than not, these mishaps are a result of your inability to react or press buttons in a timely manner. Unfortunately, sometimes Salt and Sanctuary's occasional unresponsiveness is the culprit. You might, say, dash through the air in the hopes of grasping a platform. Though your sprite presses firmly against the edge, the protagonist fails to cling and thus nose dives into a pit. Such flaws don't plague the game, per se, but they do crop up often enough to hamper the adventure a tad. 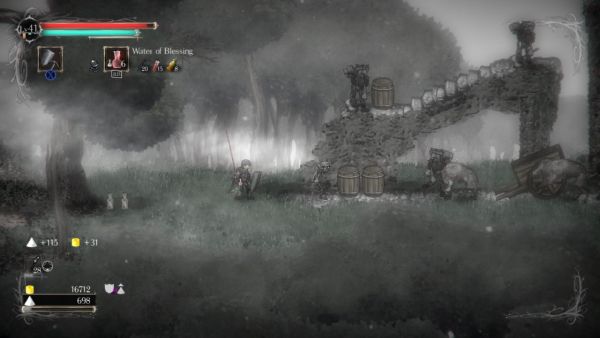 But although you might fail a thousand times, you never truly perish. A cleric revives you when your expire and swipes a wad of your cash for his troubles. He drags you to the nearest religious temple and leaves you there to fight another day. If you're lucky, you may even reach one of these monuments without dying first. With a decent enough grip of salt, you can level up and secure yourself another skill point to reinforce your character's build. Surprisingly, this is where Salt and Sanctuary's heart briefly grows a smidgen and the game cuts you some slack. The available skill tree is a grand Final Fantasy X-ish sphere grid, with character types laid out in an organized, albeit slightly messy manner.

Solely beefing up your avatar via salt farming isn't wise, though. Thankfully, most of the sanctuaries you stumble upon are unclaimed. By placing your faith's symbol upon a pedestal, you transform the shadowy chamber into a church that is freshly devoted to your creed. Additional followers crowd these shrines any time you make an offering, providing both services and passive bonuses within the sanctum's region. Blacksmiths arrive to bolster your equipment, and an alchemist transforms your measly blade into a greatsword that doubles as a huge (and devastating) pair of scissors. You can even hire a guide to assist you in fast traveling from one church to another.

In time, you may well develop into the scar-covered barbarian, ninja-like rogue or elite sorcerer you always imagined yourself to be. You might even spend enough time with the campaign to forget that Salt and Sanctuary is a 2D Dark Souls clone mixed with Metroid elements. Sure, those sources of inspiration are obvious, but the way that all comes together with the gorgeously hand drawn environments serves to set the game apart from its influences. Ska Studios' attempt to imitate both games beat by beat is effective enough that Salt and Sanctuary feels like a love letter, rather than a cash-in or a lazy product. It also exudes enough of its own personality to distinguish itself within the growing genre as more than merely another clone.
4/5

If you enjoyed this Salt and Sanctuary review, you're encouraged to discuss it with the author and with other members of the site's community. If you don't already have an HonestGamers account, you can sign up for one in a snap. Thank you for reading!

© 1998-2020 HonestGamers
None of the material contained within this site may be reproduced in any conceivable fashion without permission from the author(s) of said material. This site is not sponsored or endorsed by Nintendo, Sega, Sony, Microsoft, or any other such party. Salt and Sanctuary is a registered trademark of its copyright holder. This site makes no claim to Salt and Sanctuary, its characters, screenshots, artwork, music, or any intellectual property contained within. Opinions expressed on this site do not necessarily represent the opinion of site staff or sponsors. Staff and freelance reviews are typically written based on time spent with a retail review copy or review key for the game that is provided by its publisher.