The Incredible Baron is a game about collecting a small army of cute animals, then marching them towards their death for your personal glory. Thats a little misleading; sometimes you instead doom robotic barrels with tools such as hammers or screwdrivers welded to their lids. Or sentient stone statues carved in your likeness, complete with jaunty pirate hat. But sometimes its animals  normal, everyday animals like that snake you obtain early in the game. Its just that, should this particular snake be defeated, it explodes. Because youve filled it full of gunpowder. And then there's that fox. A cyborg fox, the likes of which you see every day in more rural areas.

Theres a whole host of (mostly) animals to enslave, actually. Which you gather via rampant slaughter dressed up as research. Should you come in contact with an undiscovered beastie, you can collect data on them by ruthlessly murdering them. Put enough innocent critters down, and theyre yours to command and further abuse. While this all perfectly describes a game based around wanton destruction, Incredible Barons not into all that serious fare. Its the story of a bungling incompetent masquerading as an exploring scientist trying to document as of yet undiscovered species. Id imagine that setting off into the unknown in the name of discovery often throws up a myriad of unforeseeable obstacles to overcome. The Barons first real test is that a slug nest has developed on the deck of his ship, and theyve eaten all the bacon.

Theres the tone set, then. From there, the Baron finds himself in a number of locations that discover some excuse to hurl angry creatures at him, then asks him to not only survive, but to turn the tide. Sometimes its just nature conspiring to put the boot in, or sometimes, its the evil scheming of arch-nemesis Norab (see what theyve done there?). Theres an underpinning plot connecting everything that most people will see coming, but its mostly lighthearted fluff, poking further fun at Barons under-trodden sidekick or disinterested love interest. 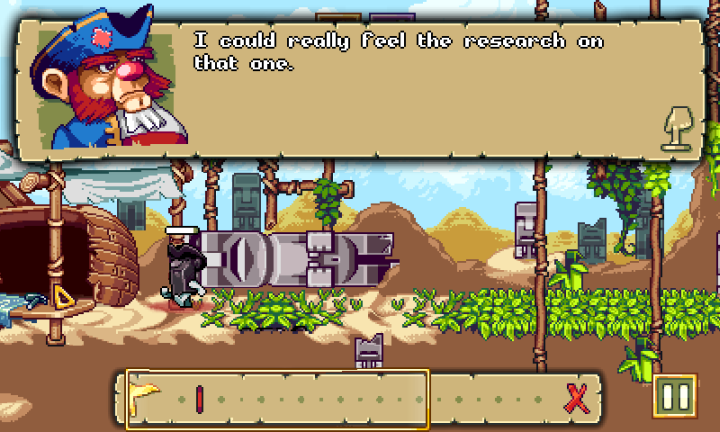 Everything is simple, right down to the faux-retro graphics, but no one ever said turning nature into your personal army had to be a massively complex affair (looking at you, Incredible Creatures!). The only key to victory is to send out more animals than you opponent does, as quickly as possible. Incredible Baron is a tug-of-war RTS in the same vein as games like Aeon Command, wherein both teams have a base on either side of a linear stretch of land, and the first person to get destroyed loses. To begin with, everythings pretty straightforward; you buy units with gold which regularly scales in the background, and you sit on that pot for a little while until youre able to send out a concentrated flurry that smashes its way through the dribbling patchwork of spaced-out enemy platoons.

But the process is never going to stay that simple. As you unlock hardier troops, so too do the enemy flocks become more robust or hit a bit harder. And with bigger and better troops come longer cool down windows before you can purchase another one, or higher prices. Soon, you stumble across a familiar looking shovel (with a skeleton clad in familiar looking armour lounging in the background) that allows you to scale down production costs. But that, too, has levels of effectiveness that can only be improved by spending more gold, often leaving someone with a moderate pile of cash deliberating over the long-term gain of kicking out cheaper units, versus the short-term gain of getting something on the map to stop that permanently burning emu from wrecking your base.

The game does a good job of introducing new quirks along the way, letting you use them in a practical sense before making you try to build strategies around them. There are physical skills available, such as dumping a landmine or shooting something with your flintlock, that eat into the Barons vitality rather than his pockets. This gives you a second resource to manage. Soon, your army starts demanding new structures  slugs and penguins come from eggs, for instance, and so require a hatchery. Wilder beasts like hedgehogs and rams require a den. Building these structures allows you to bolster your ranks, but eats up funds and produces destroyable buildings that are located further up the battlefield than your HQ. Thus, they are easier targets for your enemies, harder ones to defend seeing as your troops have to travel so far to reach them. 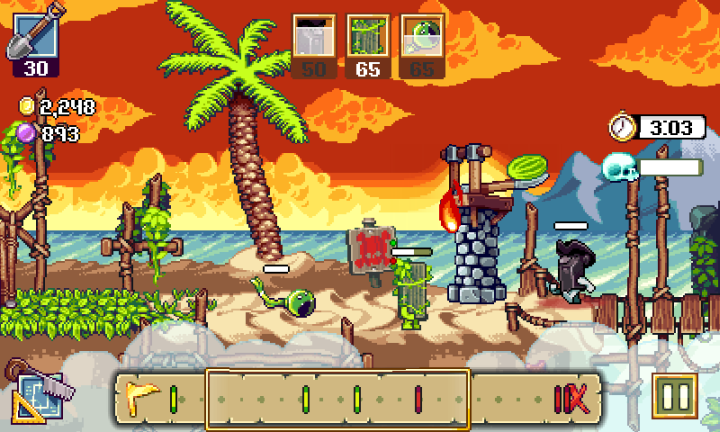 Sometimes the foundation gets mixed up. For instance, youre told to protect a single unit that is trying to make his way through enemy land mines and catapults that are hurling exploding watermelons, or youre given a finite number of resources to overcome a monster den. Those diversions are few and far between, however. Until you start revisiting levels that are replayable with greater difficulty settings in place, youll likely settle on a tactic that will see you through the majority of the levels. Victories not only give you the chance of discovering new animals, but also slowly level up the Baron himself and unlock a better bankroll. In other words, the option to grind your way through the game is there. Youll probably not need it.

It says a lot for The Incredible Baron that I saw the game off in its entirety over one long sitting. I had only booted it up to check that it worked and get a feel for it but, one evening later, I was watching the credits roll. Its not the most taxing of games, nor does it have the most depth, but it is fun. Despite what the more pretentious "game experts" out there are currently shoveling, that remains a good thing.
4/5

If you enjoyed this The Incredible Baron review, you're encouraged to discuss it with the author and with other members of the site's community. If you don't already have an HonestGamers account, you can sign up for one in a snap. Thank you for reading!

© 1998-2020 HonestGamers
None of the material contained within this site may be reproduced in any conceivable fashion without permission from the author(s) of said material. This site is not sponsored or endorsed by Nintendo, Sega, Sony, Microsoft, or any other such party. The Incredible Baron is a registered trademark of its copyright holder. This site makes no claim to The Incredible Baron, its characters, screenshots, artwork, music, or any intellectual property contained within. Opinions expressed on this site do not necessarily represent the opinion of site staff or sponsors. Staff and freelance reviews are typically written based on time spent with a retail review copy or review key for the game that is provided by its publisher.