Judgment is one of the most recent Yakuza games, and one of the best to boot, and also not actually part of that franchise at all. It's from the same developer, yes. It shares many of the same mechanics, references a lot of the same sort of stuff and explores similar themes. But it tells a new story, with new characters and a more investigative tone. For that, I love it. I suspect that if you can't get enough of Ryu ga Todoku Studios' work, you'll find yourself similarly enamored.

Three years ago, new lead character Takayuki Yagami was a rising star at the Genda Law Office in Kamurocho. He had just won acquittal for a man accused of brutal murder, and things were looking good. Then a single phone call changed everything. Suddenly, that client was arrested for another murder, more violent still, and Yagami began to question everything he thought he knew about his profession and about himself. He quit his job as an attorney and became a private investigator instead, working alongside a long-time former yakuza acquaintance named Masaharu Kaito. Now the two outcasts struggle to make ends meet, or to find much of anything interesting to do, until one day they are unexpectedly tasked with finding evidence to prove a local member of the yakuza isn't in fact a serial killer. The new case will once again force Yagami to face the fact that maybe he doesn't know as much as he thinks he does, about virtually anything or anyone. 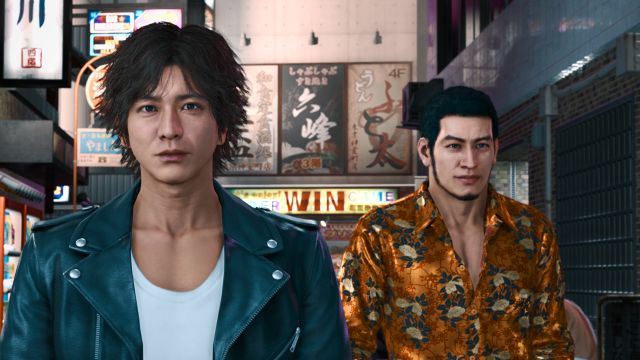 Judgment tells one the best stories I can remember encountering in a video game up to this point. It's good enough at what it does that I started doing something I never thought I would: I began wishing the gameplay would get out of the way so I could explore the next exciting twist (if you want to focus on the narrative yourself, do know there are easier difficulty settings than the default one I chose). The tale unfolds masterfully, introducing new characters and diving deeper into what makes them tick than a typical Yakuza game ever has. Nobody is perfect, and that's a given, but character flaws here resonate more and bits of humanity show in small actions, like when a hardened criminal plays catch with a child on the playground.

I didn't play the 2019 release on PlayStation 4, which leaves me with complicated feelings. On the one hand, I have to live with knowing I could have experienced the game's greatness sooner. On the other hand, I can at least know that experience would have been less optimal and perhaps I was better off waiting. On PlayStation 5, everything is just plain gorgeous. There's very little pop-in. Skyscrapers tower in the distance, their penthouses sharp against a skyline turned hazy by unnatural city lights. On the street level, pedestrians rub shoulders as they go about their errands or stop to visit. Barkers stand on corners, shouting about the services and entertainment they offer. Gang members roam in packs and accost innocent civilians as police sirens wail in the background and patrol cars race to more important crimes in other parts of the city. It feels like a world that will go right on doing its thing, even if you pull away from it. I even enjoyed standing in Yagami's office and looking out the window at the city life outside. Almost anywhere, I can pause and take in new details I didn't notice on previous excursions.

While the grander details are important and give the game its wonderful sense of reality, the more intimate moments do that same job even more efficiently. I can't remember another game where the characters cried and it looked like something I might see in a performance from an accomplished actor on television or at the theater. Maybe the teeth look ever so slightly odd and old men's hands look like they've been revitalized with Dove moisture cream to eliminate wrinkles, but otherwise the character models are gorgeous and believable. They are capable of communicating a complicated range of emotions with just a glance or a lingering gaze. Polygons have certainly come a long way. 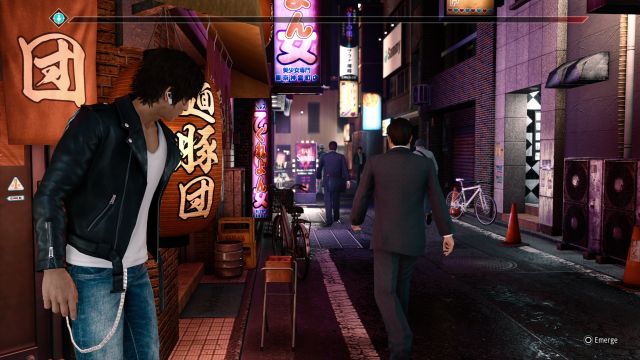 Compared to the story, the game's other elements can't hope to fully compete, but they make exactly the sort of effort long-time Yakuza players might expect and with excellent results. As I noted, Kamurocho is full of busy people. That translates to numerous optional side quests and mini-games that let you get to know the city's locations and inhabitants that much better. As usual, subject matter is all over the map, ranging from bizarre to touching. For example, there's a local celebrity who keeps losing his toupee, and you must chase it down for him. There's a fortune teller who keeps predicting calamity for everyone, sometimes at great personal risk. And these events are of course tied into familiar gameplay elements, as well as some new activities.

Yagami is a detective, so he doesn't just rely on his ability to kick butt. Many of his missions require him to tail a suspect without calling attention to himself. Or to pick locks, or to fly a drone. Sometimes, he'll engage in a battle of wits, digging through evidence he has assembled to tie the pieces together in ways that might stand up in court. These moments help Judgment to stand apart from its peers. They give the player something new to look forward to, while still feeling right for a plot that sometimes seems to be wandering a bit far afield. To my surprise, though, the new diversions ultimately revealed a weakness I didn't expect the game to have: overly repetitive combat.

Like the Yakuza games, Judgment lets you seamlessly wander the streets and buildings of Kamurocho. Load times, which are shockingly brief on the PlayStation 5, are also fairly uncommon except when you're actively advancing story-based missions. You get to feel like you have truly become the resident of a fully realized world. And yet you are constantly interrupted (especially as things progress) by various gang members who come into town to stir up trouble and kick your ass. Though stuffed full of things to do, the Kamurocho environment isn't actually all that massive, which means sometimes it can feel like you've barely gone a block since your last brawl before it's time for another one. Of course each fight awards you skill points, but the distribution is so miserly that you might have to fight dozens of times to get enough points to unlock a new technique. 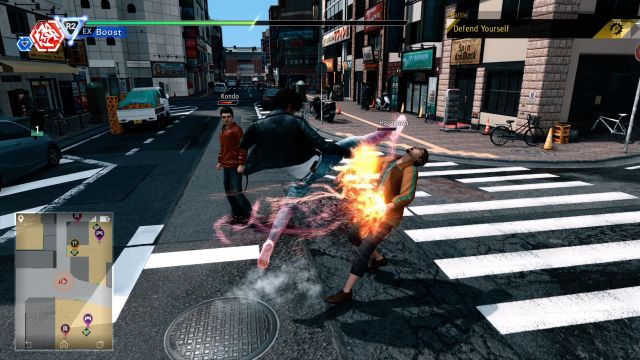 Combat can be satisfying in the moment and it packs the anticipated punch, but it also feels slightly derivative. Yagami grabs bikes and traffic cones and beats his foes senseless. He gets knocked to the ground but comes up with his feet whirling like a tornado. Much of what he accomplishes feels like it was lifted right out of the last Yakuza game. And then, to make things worse, enemies start inflicting "mortal wounds" that lock away pieces of your life meter if they happen to connect (though skillful dodges minimize the frequency of such occurrences when you're not set upon by a gunman). Thus, you'll find it often pays to avoid fights with tougher recurring foes, just in case one of them is packing heat, so you don't have to pay a costly visit to an underground doctor. It's unfortunate the game is designed in such a way that players would do well to avoid engaging with a central component more than is absolutely necessary.

There's not really room to go into everything that makes Judgment an utterly absorbing experience, or to give proper context to those few minor areas where it could stand with some improvement. I spent more than three dozen hours with the game and there's still side content I haven't fully explored. I look forward to continuing to enjoy everything the game has to offer at a more leisurely pace, now that I've seen the main story through its satisfying twists and turns. I know there will be some annoyances along the way, but they don't matter much in the grand scheme of things because Judgment has solidified its place as one of my favorite games available on the PlayStation 5. If you have yet to experience it for yourself, my advice is to make time for it in your schedule as soon as possible. Otherwise, you'll possibly wind up kicking yourself for not getting to it sooner. I know I am!

If you enjoyed this Judgment review, you're encouraged to discuss it with the author and with other members of the site's community. If you don't already have an HonestGamers account, you can sign up for one in a snap. Thank you for reading!

© 1998-2021 HonestGamers
None of the material contained within this site may be reproduced in any conceivable fashion without permission from the author(s) of said material. This site is not sponsored or endorsed by Nintendo, Sega, Sony, Microsoft, or any other such party. Judgment is a registered trademark of its copyright holder. This site makes no claim to Judgment, its characters, screenshots, artwork, music, or any intellectual property contained within. Opinions expressed on this site do not necessarily represent the opinion of site staff or sponsors. Staff and freelance reviews are typically written based on time spent with a retail review copy or review key for the game that is provided by its publisher.