As a big fan of Strider at local 7-11s, I was pretty hyped when I heard there was an NES conversion and would play it at a friends' home checking out just how close to the arcade it was. Well, it was sure different alright, being I never knew then that the NES version was a total different thing from the Arcade hit, along with story and characters never shown in that version of the game. It was a mystery to me in finding out why this was at the time, but I had as much a great time playing it as I did the original, being that both were featuring the same titular character. It wasn't until the internet was around that I would find out this version was based on a Manga created by the artist group Moto Kikakku, a company copyright often appearing whenever Strider Hiryu was featured in any other game. Capcom made a deal with the company in creating a story which would include said characters and plot featured in the NES game rather than following the Arcade original. In essence, Strider on this system was more like an alternate reality version of the Hiryu we would use to slash the Grand Master in any other version. 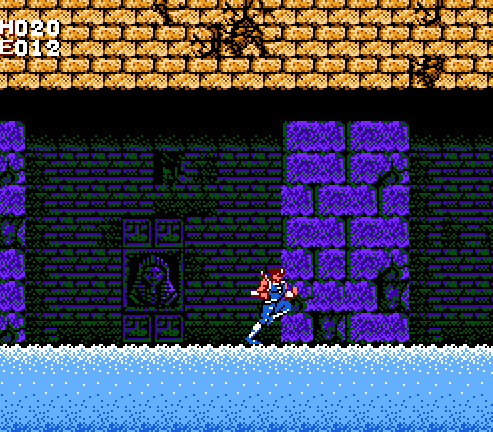 The story opens with Matic, leader of the Striders sending HiRyu to eliminate fellow Strider Cain who has been recently been captured by the MIlitary Police of Khazak. HiRyu suspecting there is more to this mission decides to go against his orders and rescue Cain instead; learning a sinister plot that goes far beyond what his initial mission was going to be. HiRyu travels around the world seeking answers to Matic's questionable command revealing more than what he would ever suspect indeed.

Unlike other adaptations of the game, the NES version has you control HiRyu throughout a non-linear set of stages on which you can return at any given time as more paths open to successfully explore an entire section of each. This however can only be done after you collect certain items like "data disks" which will be able to unlock more stages and more clues towards his goal. While the hunt for said clues and backtracking aren't overly difficult, the control issues in handling HiRyu makes it quite difficult for the player to successfully acquire what's needed on each stage you travel upon. The jump control here is quite atrocious, forcing you to move the pad in certain ways if you wish to perform a successful jump. HiRyu can get stuck in place if you try to move as you press the jump button for instance, and the triangular jump is a test of patience you must champion if you are to continue any further through the game. 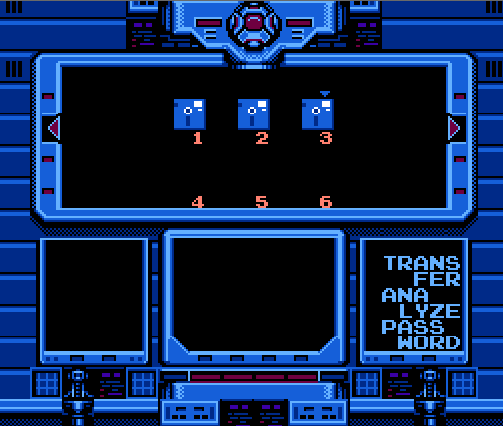 Finding data disks not only opens up more stages but can also help you level up.

While it is not too hard to find items within the section of the game you wander, it is quite easy to miss some of them. The waterproof boots that allow you to walk through water for example are stashed away within the pyramid and are quite easy to miss being the path opens directly towards chambers filled with water which will be the death of you if you try to pass by without them.

Along the way you can level up by acquiring items, conversing with certain characters, or meeting other requirements as you revisit locations. Your HP and MP increase substantially, allowing you to use special techniques to replenish health or shoot energy blasts. The latter could be skipped entirely, being that HiRyu learns to shoot such from his sword without any MP cost after meeting with a certain NPC. 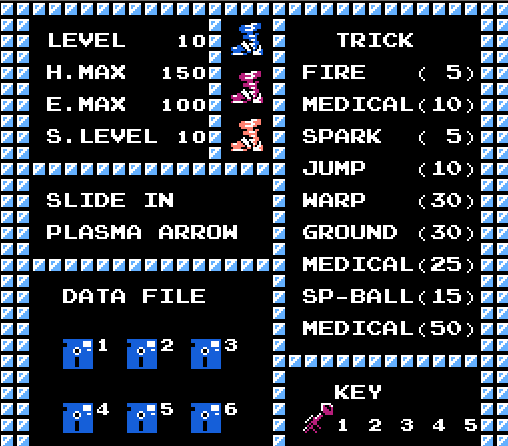 The MENU screen you can access to check on status and select any skill you learn through the game.

Whenever you visit a new location you must pay heed to the layout of a new environment, as well as any chance of you ever being able to get past walled segments that must be opened with the right key you find in previous stages. Even if a new country is open to explore there are always the risk of dying when stepping into blindly. HiRyu has only one life to use in this game after his HP runs out, and the only way to continue is via password to index any items and stages that had been cleared. Otherwise you will start from the very start all over again.
2.5/5

If you enjoyed this Strider review, you're encouraged to discuss it with the author and with other members of the site's community. If you don't already have an HonestGamers account, you can sign up for one in a snap. Thank you for reading!

© 1998-2021 HonestGamers
None of the material contained within this site may be reproduced in any conceivable fashion without permission from the author(s) of said material. This site is not sponsored or endorsed by Nintendo, Sega, Sony, Microsoft, or any other such party. Strider is a registered trademark of its copyright holder. This site makes no claim to Strider, its characters, screenshots, artwork, music, or any intellectual property contained within. Opinions expressed on this site do not necessarily represent the opinion of site staff or sponsors. Staff and freelance reviews are typically written based on time spent with a retail review copy or review key for the game that is provided by its publisher.