Since their inception, Japanese video games have tried to look like anime. As technology progressed and visual fidelity increased, games became increasingly difficult to distinguish from their animated inspiration. Visuals arent everything, however, and Gusts latest JRPG proves there can be more to anime-inspired games than just looks.

Blue Reflection, the new IP from Atelier studio Gust, casts players in the role of ordinary high school student Hinako Shirai. She used to be an up-and-coming ballet dancer, but a knee injury ensured she would never dance again. She soon discovers an alternate world called The Common, where humanitys base emotions lie. Here, she becomes a magical girl (e.g. Sailor Moon) and finds shell be granted one wish if she helps fellow magical girls Yuzu and Lime to defeat the demons preying upon humanitys emotions. She commits herself to this task with the hope shell someday be able to dance again. 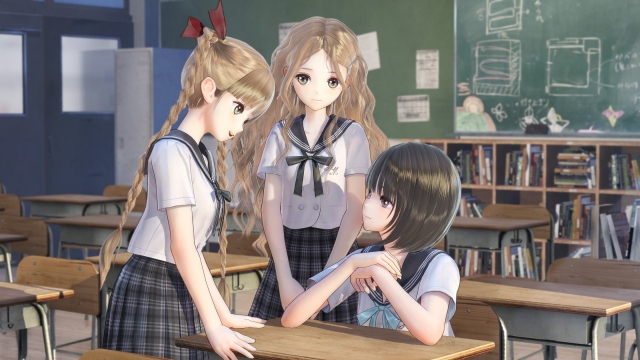 While there were a few Sailor Moon RPGs released on the SNES, the magical girl genre has otherwise rarely been seen in video games. Blue Reflection nails not only the aesthetic, but the sincerity and hope the magical girl genre brings to the table. At its core, the game is about learning to empathize with others. Hinako starts out cold and bitter due to her dream-robbing injury, but begins to open up to others as she gains perspective. Over the course of her journey, she learns that friendship and compassion are the real keys to happiness. The premise certainly sounds cheesy, but the narrative's sincerity prevents things from ever going too far in that direction.

Impressively, Blue Reflection works the ideas of empathy and compassion into its core gameplay. The game is split in two parts. In one of them, Hinako explores her school and talks to students about their problems. She then travels to The Common to defeat the demons that are feeding on her classmates emotions. The first of those parts has the most legs, as its a delight to help Hinakos classmates with their problems. For example, one classmate is a genius recluse who has trouble connecting with others. Hinako must teach her from step one how to make friends.

Though endearing and worthwhile all on their own, these interactions are of the utmost importance because they are the only method of leveling up Hinako. Experience isnt gained after combat, but rather is awarded as points earned when the heroine helps out her fellow students. These points can then be invested in one of four stats that increase her power and unlock new abilities after each stat reaches certain milestones. 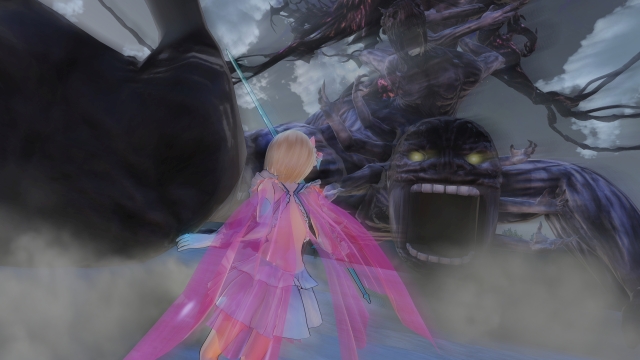 Helping out others not only increases characters stats, but grants the use of fragments that can be equipped on abilities to increase either that specific abilitys power or the character as a whole. For instance, a basic attack has two slots that can be equipped with one fragment to increase basic attack power and another to increase speed. Multiple fragments can be obtained from the same character, so its a good idea to return to friends after resolving their problem, to hang out and gain more power.

When it comes to exploring The Common, Blue Reflection stumbles a bit. The Common is split into four areas: Happiness, Anger, Fear and Sorrow. Each area is unique, with some gorgeous visuals that clearly define the area youre in, such as a volcano environment for anger. Unfortunately, the actual map design is lacking. Most areas consist of a few paths that lead to a collectible or monster. The Common is certainly awe-inspiring at first, thanks to its aesthetic, but that impact becomes boring by the time you're making your 10th visit.

With combat not serving its usual purpose of bestowing experience, it would be easy to say Blue Reflection should have just been an adventure game. It certainly would have lost nothing in the transition, but Im glad the combat is included as its a joy to experience. The game utilizes a standard turn-based system, with player characters and enemies on a descending timer to determine turn order. The primary goal is to inflict knockback blows on enemies, as it pushes their turn back up the timer and may influence turn order. The complexity comes from the fact that an ability with good knockback capabilities may not have a type advantage against the current enemies. Players will have to decide if damage or knockback is more important. 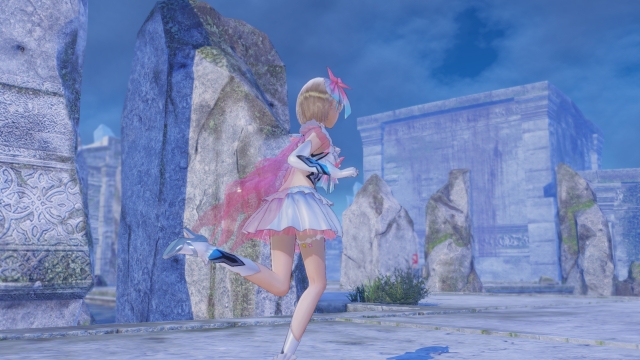 Another major component of combat is the Reflect gauge. The meter starts at around 30 percent as combat commences, but can be filled by either using an ability or guarding. Some abilities are augmented based on how high the Reflect gauge is, but the main beneficiary is the overdrive skill. It allows a character to act multiple times in one turn, if the gauge is at a certain level. In between turns, the Reflect gauge can also be expended by holding right or left on the d-pad to either raise a protective shield around the party or to restore their HP/MP. It all feels rather complex, but Blue Reflection introduces each of these elements slowly, so that it always feels like youre getting more instead of being overwhelmed.

The best part of the combat, however, is when a boss monster enters the real world. Only during these encounters, Hinako is able to call upon the people shes helped previously to aid her in combat. Each party member can bring four of these people into battle, and can activate their ability after an action. Some abilities are straight attacks, such as the delinquent girl kicking a can at the boss, while others are support actions, such as emergency first aid. After use, these companions have to take time out to recharge, but some abilities can bring them back into battle faster. 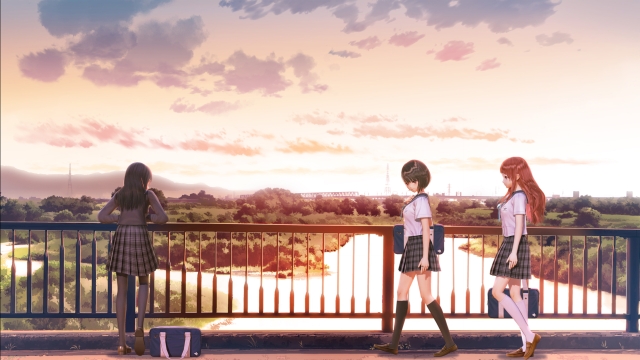 The monotonous rhythm of the story feeds into the anime feel of Blue Reflection, but the cinematography is where the game goes above and beyond its peers. Every cutscene is meticulously directed to look exactly like an anime, with wide-angle shots of a group on the school roof before going in for a close up as each character speaks and then ending in a low shot of just the characters feet as they walk back inside. Its easily the most authentic representation of anime direction Ive ever seen in a game, and must be commended.

Blue Reflection is a hard sell. Its a gorgeous game, but the feminine art style might be off putting to those more used to what we generally see from anime games. It also feels like an anime series to a fault. I imagine the episodic structure will begin to feel monotonous to some after a while. With that being said, theres really nothing quite like it either. It not only has the magical girl angle going for it, but its rare to find a game that banks its entire identity on the idea of empathy. Blue Reflection isnt the best game this year, but it might just be one of the most important.
4/5

If you enjoyed this Blue Reflection review, you're encouraged to discuss it with the author and with other members of the site's community. If you don't already have an HonestGamers account, you can sign up for one in a snap. Thank you for reading!

© 1998-2020 HonestGamers
None of the material contained within this site may be reproduced in any conceivable fashion without permission from the author(s) of said material. This site is not sponsored or endorsed by Nintendo, Sega, Sony, Microsoft, or any other such party. Blue Reflection is a registered trademark of its copyright holder. This site makes no claim to Blue Reflection, its characters, screenshots, artwork, music, or any intellectual property contained within. Opinions expressed on this site do not necessarily represent the opinion of site staff or sponsors. Staff and freelance reviews are typically written based on time spent with a retail review copy or review key for the game that is provided by its publisher.