The indie horror gaming scene has really come into its own. Developers and modders have released some fantastic short titles that are both creepy and effective, despite obvious limitations. Such games tend to be brief, sometimes lasting under an hour, so they need to be efficient when it comes to generating scares. This usually requires the developer to eschew deep character development and a drawn out storyline in favor of a snappy narrative and a simple conflict, whilst also remembering to include memorable moments and scary surprises.

Some developers can pull this off fairly well, while others fail miserably. To wit, there's One Late Night, a short horror adventure in which you play a web designer trapped in an office suite haunted by a malevolent spirit known as The Black Widow.

The game's mechanics and premise are as simple as can be. You spend much of its short campaign traipsing hallways and entering offices, also while clicking on various pieces of furniture to search for event items. Occasionally you'll hear a bump in an abnormally dark room or a voice in the distance, or perhaps even receive a phone call from someone apparently short on breath, saying, "I. SEE. YOU." 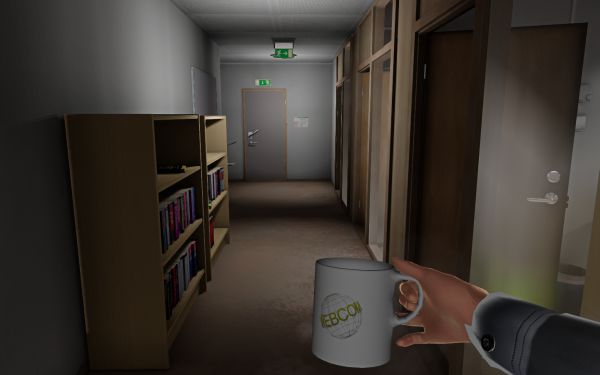 You'd expect the game to turn the creepy way up from there. Unfortunately, this is where One Late Night fizzles out.

Where before you may have been anxious to open doors or turn corners for fear of a surprise appearance from the antagonist, now you'll likely start losing patience. No matter how long you wander around the suite, only the aforementioned chills assail you. After a little more clicking and object-fetching, One Late Night finally steps up its game by throwing out the most frightening material it can muster. On one occasion, a chair inexplicably flies at you. In another, a balloon mysteriously manifested and popped. Behold the terror!

The scares eventually reach their apex when you enter a kitchen and maybe kind of jolt when every cabinet and drawer in the room suddenly opens. My response to this scene: "'Paranormal Activity 2' just called. It wants its unscary jump scene back."

One Late Night mostly utilizes hackneyed scares as a means to build tension before the big reveal. Unfortunately, most of these devices were never scary or tense in the first place. Without sufficiently built tension, The Black Widow's grand entrance becomes an anticlimax. Rather than quake in the awesomeness of her presence, you'll more than likely shrug. 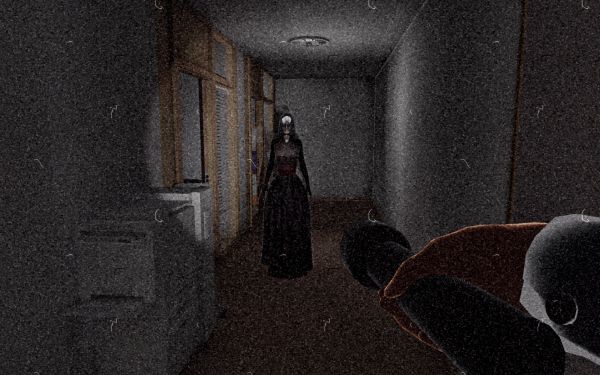 Of course, it doesn't help that the Widow isn't all that interesting, either. For one thing, she's too much like the "Insidious" villain, the Bride in Black, a similarly veiled specter from--yet again--a popular horror movie. Splice the Bride with Sadako/Samara from "Ringu/The Ring" and you have the Widow, yet another middling man-eater to add to a long list of forgettable fiends. To be fair, there are plenty of other boogeymen who are just offshoots or adaptations of previously used killers. However, most of them have something about them that is authentic or unique. The Black Widow has little to nothing that sets her apart from the Bride in Black or Sadako.

Even with effective scares out the window, the game can still manage to hold one's interest by providing engaging or entertaining content. One Late Night attempts to accomplish this by having you continuously rifle through desks, garbage cans, and even toilets in order to find campaign-advancing goodies. You'll receive few indications as to where you should check for event items, which leaves you one option: search everything.

While it is great that One Late Night doesn't hold your hand, it's still annoying that advancing through the game amounts to opening every container until you happen upon an event item. For instance, one of your first tasks is accessing a coworker's locked office. I scoured the suite in my playthrough for what felt like ages before stumbling upon the key in a place I wouldn't have thought to look it. Eventually, I was able to open the door, and all I received for my troubles was a note on the coworker's desk instructing me to look in the drawer. So I peeked inside and found nothing. 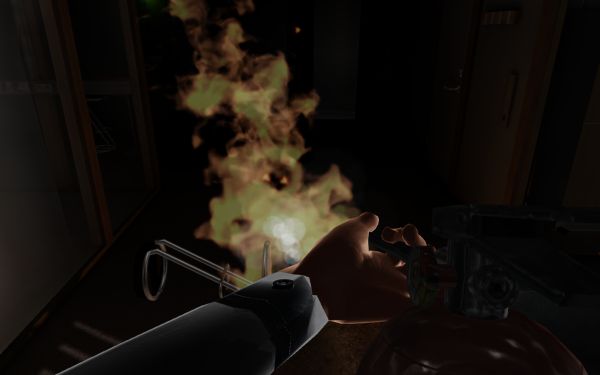 I was enraged at first, until I realized that the note could have been indicating any of the numerous drawers in the suite. I went wild seeking the magical drawer that held whatever the hell I was looking for, but to no avail. I eventually returned to the office and reexamined the note, thinking that maybe I had overlooked something. It turned out that I was supposed to physically obtain the note, even though I could clearly read it while it sat on the desk. Only then did a flashlight manifest in my coworker's drawer.

Excited to have a new toy with which to advance the game, I tried it out. Expecting a brilliant beam to form in the middle of the screen, I was instead greeted by a subtitle reminding me that I was out of batteries. With no indication as to the whereabouts of my power source, I was once again doomed to traverse the offices in limbo.

Thankfully the game can be beaten in under an hour...

While few of One Late Night's issues are what I would call tremendously damaging, the game still isn't all that entertaining or unnerving. Even for a title that can be beaten in fifteen minutes, it's a slow, tedious plod that involves too much wandering and examining the environment, and not enough frightening material. When the "good stuff" finally does occur, you might find that it wasn't worth sitting through the first half of the game. Bottom line: only if you're hard up for a short horror experience should you consider One Late Night. It's not the worst of its kind, but you can find so many superior titles online.
1.5/5

If you enjoyed this One Late Night review, you're encouraged to discuss it with the author and with other members of the site's community. If you don't already have an HonestGamers account, you can sign up for one in a snap. Thank you for reading!

© 1998-2020 HonestGamers
None of the material contained within this site may be reproduced in any conceivable fashion without permission from the author(s) of said material. This site is not sponsored or endorsed by Nintendo, Sega, Sony, Microsoft, or any other such party. One Late Night is a registered trademark of its copyright holder. This site makes no claim to One Late Night, its characters, screenshots, artwork, music, or any intellectual property contained within. Opinions expressed on this site do not necessarily represent the opinion of site staff or sponsors. Staff and freelance reviews are typically written based on time spent with a retail review copy or review key for the game that is provided by its publisher.