Rogue-likes are notorious for their complexity, variety, and brutality. Classics like NetHack can be played hundreds of times and the players may still see something completely new on their 101st run. Traditional rogue-likes have extraordinarily convoluted controls to match this complexity, often utilizing every single key for a specific job. ASCII interfaces manage to cram a shocking amount of detail into tiny places, displaying multiple monsters, items, and environmental hazards without a single sprite. This allowed for more detail than consoles could produce in the 1980s and 1990s. 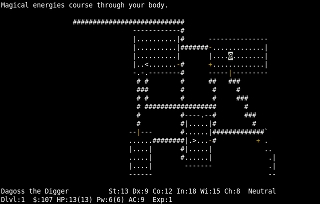 Nethack, a popular and enduring Rogue-clone 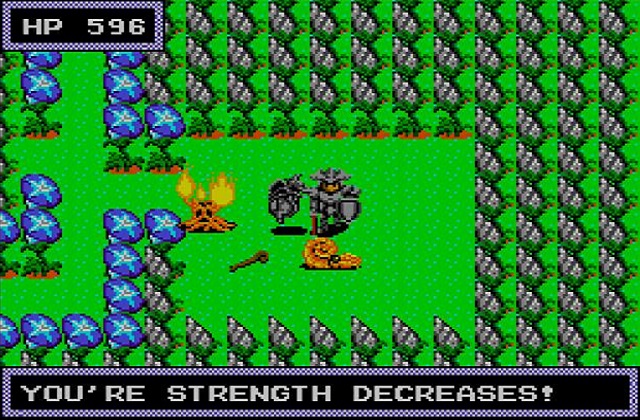 Dragon Crystal for the Game Gear was heavily based on the MegaDrive Fatal Labyrinth, with both being the first handheld and console Rogue-like games respectively

None of these were called rogue-likes when they were new because the term wasnt really used yet. The first documented use of Rogue-like that I can find is on a Usenet group in 1993, though some of that discussion implies the term had been in sparse usage prior to that. Rogue was over a decade old at this point, but not forgotten by computer gamers. In a 1991 review of Dragon Crystal in Dragon Magazine, the reviewer noted that it reminds us somewhat of the computer game Rogue. It was not recognized outright as a Rogue clone, but Rogue had a solid reputation by this point with computer gamers and the similarities would have been apparent to anyone that played both games (though the audience of Game Gear and early computers didnt overlap much).

I havent been able to find contemporary Japanese reviews of Cave Noire, so I could only guess if Japanese players noticed the similarities to Rogue. Its very likely that some staff were familiar with Rogue though, given the well documented influence of western games like Ultima and Wizardry on early Japanese console game developers. Cave Noire in particular was designed by a programmer, Kazuo Iwasaki, and its likely someone with software engineering training had encountered Rogue or one of its early clones while tinkering with computers.

While today the terms Rogue-like or Rogue-lite conjure concepts like permadeath, repeated playthroughs, brutal challenge, and intense risk-based decisions, Rogue-style games are fundamentally puzzles, challenging the player to get from X to Y without stepping on the tiles that will kill them. It is that quality of Rogue that Cave Noire focuses on.

Regardless of whatever anachronistic label we want to apply to Cave Noire, it is something unique, both in its time and today. It keeps only a few parts of the Rogue experience to make it work on the limited Game Boy, but at no point does it feel compromised. In fact, it feels like it is perfect in its clear design that its shocking to know that decades later, it has never been imitated.

A playthrough consists of selecting a quest and a difficulty, and then completing it, which will unlock the next difficulty, with 10 difficulties total. The player does not gain experience levels or skills as they descend the dungeon but rather only items to be used strategically. There are four quests the player can accept, such as kill 6 enemies or collect 25 coins. Once the quest is complete, an exit will appear in the dungeon. Depending on the quest and difficulty, a typical run usually only takes a few minutes.

The quick playtime and ability to choose a granular difficulty makes Cave Noire feel more like Tetris than Rogue. There are no shops, no persistent abilities to gain, and no carry over between playthroughs. The only thing that persists is the difficulty levels unlocked.

While the player cannot level up, some items will increase stats for the current run. This sword will increase attack by 1 but also uses a precious inventory slot.

Different quests require different approaches. Since there is no real benefit to defeating a monster, the player is better off avoiding most encounters entirely. Every time the player moves, enemies in the room will move as well. All enemies have predictable turn-based movements, such as spiders that move counterclockwise around the perimeter of the room or crabs that only move horizontally. The challenge of Cave Noire is for the player to understand how enemies will move in different situations and to apply that knowledge to get around them safely, much like F.O.E. puzzles in the Etrian Odyssey series.

Cave Noires turn order is unusual but opens new gameplay possibilities. The player always moves and attacks first, in one action. Next monsters will attack and then move. Inverting monster movement and attack makes it possible for players navigate around enemies safely. For example, if the player is diagonal from a crab (an enemy that moves horizontally back and forth) and the player moves next to the crab, they can attack first but then the crab can attack back. However, if the player presses B and waits instead of moving, the crabs attack turn is wasted (because it is not next to the player) and then it moves adjacent to the player. Now the player gets to move and can move safely out of the way.

This sequence (from left to right) shows how enemies can be carefully avoided. This is enabled by the unusual way that enemies attack before moving.

With the exception of one quest, Cave Noire discourages combat unless there is no other way around an enemy. Wasting health and resources rarely helps the player (although there are exceptions, like flame enemies that light dark rooms when destroyed). With only eight item slots, the player usually cannot afford to waste a health potion on an avoidable fight when the goal is to collect something else anyway.

Managing the fixed-sized inventory is critical to success.

The player starts with four random consumable items, such as a fire scroll (deals 12 damage to a monster anywhere on the screen), a health potion, or an invisibility potion. As the player descends they can find consumable and permanent items, such as objects to increase strength when kept in inventory and potions that permanently increase health. With such a limited space and with some quests requiring the player to carry specific items, skillful inventory management is just as important as combat avoidance.

Despite the randomized floor layout and item load out, Cave Noire seldom feels unfair. Rarely will the player be forced to engage an enemy, and if they must fight it is usually the result of a poor decision a few turns back. Most deaths can be avoided entirely with patience, restraint, and careful observation.

Cave Noire is perfectly designed for the Game Boy. Within a mere five minutes, you can have a complete, satisfying RPG adventure, which is a claim I dont think any other roleplaying game could make. The deliberate turn-based movement and simple actions feel natural and friendly in a way that most Rogue-inspired games do not. You can learn the rules and basic strategies in a few minutes, then spend hours trying to master them. Compare that to the complexity and obtuse input scheme of other Rogue-styles games from the late 90s and Cave Noire stands out for its immediate accessibility.

Even though Rogue-likes have enjoyed a renaissance in the past decade with Spelunky, Hades, Slay the Spire, and stuff on the Rogue-periphery like Dark Souls, there are no other games like Cave Noire. Its clear mechanics and short duration provide a unique experience that proves limitation gives rise to ingenuity.

While an unofficial translation patch exists, Cave Noire is accessible enough without it thanks to its use of iconography instead of text for items.


To the best of my knowledge, Cave Noire has never been released outside Japan, reissued, officially translated, or included in any compilations. There is an unofficial translation patch though it is not strictly necessary since items are indicated with pictures. The Game Boy is region-free so you can play it on a North American system without issue. Of all the Game Boy games that never left Japan, Cave Noire is one of the most accessible and most polished. If you like turn-based RPGs, puzzle games, or Rogue-likes, Cave Noire is the next hidden gem you need to discover.

If you enjoyed this Cave Noire review, you're encouraged to discuss it with the author and with other members of the site's community. If you don't already have an HonestGamers account, you can sign up for one in a snap. Thank you for reading!

© 1998-2021 HonestGamers
None of the material contained within this site may be reproduced in any conceivable fashion without permission from the author(s) of said material. This site is not sponsored or endorsed by Nintendo, Sega, Sony, Microsoft, or any other such party. Cave Noire is a registered trademark of its copyright holder. This site makes no claim to Cave Noire, its characters, screenshots, artwork, music, or any intellectual property contained within. Opinions expressed on this site do not necessarily represent the opinion of site staff or sponsors. Staff and freelance reviews are typically written based on time spent with a retail review copy or review key for the game that is provided by its publisher.