Eschewing fisticuffs in favor of swords, axes and magic, the Sega Genesis' Golden Axe had to have been considered a pretty cool alternative to games like Double Dragon when it was released back in 1989. Nowadays, I'd consider it to be an archaic fossil that definitely doesn't pass the prestigious Rob's Fun Test with flying colors. Or any colors, for that matter.

Don't get me wrong, I have nothing against retro brawlers. I still receive all sorts of enjoyment when I pick up Final Fight or Streets of Rage. But Golden Axe is all sorts of clunky mixed with an unhealthy dose of boring repetition. Stretching over eight levels -- an increase of two over the arcade original -- the main saving grace is that those stages are short. Often frustrating as hell, at least if you're playing solo, but short.

If I have one regret about being an angry loner when it comes to my gaming, it's that I often must guess as to how the experience is changed if you're experiencing it with a friend. Golden Axe is no exception. While playing, I got the distinct impression that it was made for two players and by going solo, I was setting myself up for a more difficult time. Why? Because virtually every encounter gave me flashbacks to FROM Software and how that company LOVES setting you up against multiple tough foes at once, forcing you to play really cautiously while looking for anything resembling an opening where you can inflict wounds without being tag teamed into an early grave. With an ally, the odds could have been more even and combat might have been something more than repeated exercises in crowd control. 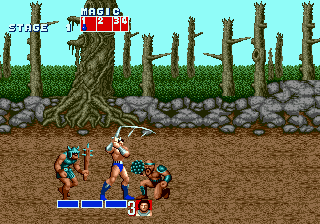 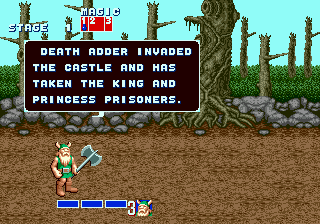 I'd be on a screen with two or three enemies and walking all over the place attempting to utilize a jumping attack on one of my opponents. Not the regular attack, as those turn into combos and standing still long enough to finish one of those is a good way for an enemy to come up on you and deliver a beating. Or quickly charge across the screen and flatten you with one move. With most of the enemies being durable enough to absorb a few jump attacks or at least two full combos, this made fights drag on to the degree that eight short stages somehow felt much, much longer.

As expected from a brawler, the story is simple. The evil Death Adder has kidnapped the king and his daughter and, perhaps more importantly, acquired the titular Golden Axe, so you choose from a trio of characters and endeavor to rescue what needs rescuing and kill what needs killing. Each hero is a bit different, with one that's well-rounded, one that focuses more on physicality and one who's best at magic. While beating Death Adder would conclude the arcade original, this game adds two additional levels that culminate with a battle against a palette-swap of Death Adder. Thrilling, I know.

Speaking of magic, that ability is obtained from vials dropped by bag-wielding thieves who pop up during interludes between levels or, occasionally, as no-effort confrontations in those stages. By pressing the appropriate button, you'll use all your vials to damage all enemies on the screen. Of course, since ALL of it is used and visits from those thieves aren't exactly frequent, magic becomes a precious commodity only worth using to somewhat weaken bosses.

That's just one reason why nearly every level plays out the same way. You'll have a handful of fights containing one to three enemies and then a boss encounter. While a couple of those are simply multiple waves of regular enemies, most involve you fighting against big barbarian guys, big armored knights or Death Adder (or clone). With those larger enemies often accompanied by a couple smaller foes just to make sure you have no choice but to move all over the screen looking for opportunities to strike that don't also result in you being cornered.

In a few levels, Sega tried for a bit of variety by adding mounts. Occasionally, an enemy enters the fray riding some sort of beast. You can quickly knock them off their ride and take it over for yourself to attack enemies with tail strikes or fire. Of course, it's just as easy for you to get knocked off, so you'll still have to fight just as cautiously as before, but as far as alternate forms of attack goes, a small dragon is neater than a steel pipe! 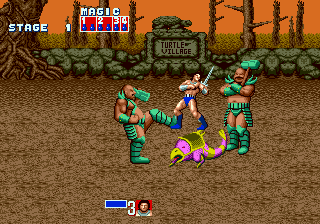 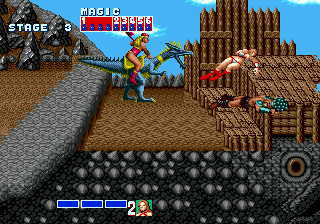 Since this is a brawler with depth to its screen, you'll be able to move up and down, as well as left and right. And with that depth, the game occasionally includes hazards such as pits that you can use for enemy disposal. While this does make certain battles much easier, there's no sense of accomplishment in causing tricky foes to plummet to their demise. Since their movements are designed to home in on your location, it's just too easy. Find a pit and move up or down, while watching the idiots blunder into it. You wouldn't think soldiers capable of charging halfway across the screen and exercising a picture-perfect flying kick into your face would be legally blind, but here we are.

Golden Axe isn't the most complex or thrilling game to write about. There are about four or five enemies and three bosses, all of which are palette-swapped multiple times, with there being little-to-no difference in how any of them fight. Death Adder and his clones differentiate themselves from the pack by virtue of being able to use a bit of magic, while all the bosses have longer range than the rank-and-file, making approaching them a bit more hazardous. The levels all kind of blend together, which isn't something I would have expected to say, considering one of them seems to take place on the body of a gigantic bird.

Golden Axe is a clunky game from early in the Genesis' lifespan and it just doesn't hold up by the standards of today. I don't even know that I would have really liked it if I'd been playing it 30 or more years ago. It's simple and repetitive -- and if you're doing the one-player mode, it's tedious and frustrating to meander around the screen hoping for opportunities to gradually whittle down enemies without allowing them to return the favor. Sure, I could wax eloquently on how this game likely served as an inspiration for many other titles and all that jazz, but no amount of historical commentary can change how this game simply isn't much fun and could best be described as a chore to get through.

If you enjoyed this Golden Axe review, you're encouraged to discuss it with the author and with other members of the site's community. If you don't already have an HonestGamers account, you can sign up for one in a snap. Thank you for reading!

© 1998-2021 HonestGamers
None of the material contained within this site may be reproduced in any conceivable fashion without permission from the author(s) of said material. This site is not sponsored or endorsed by Nintendo, Sega, Sony, Microsoft, or any other such party. Golden Axe is a registered trademark of its copyright holder. This site makes no claim to Golden Axe, its characters, screenshots, artwork, music, or any intellectual property contained within. Opinions expressed on this site do not necessarily represent the opinion of site staff or sponsors. Staff and freelance reviews are typically written based on time spent with a retail review copy or review key for the game that is provided by its publisher.